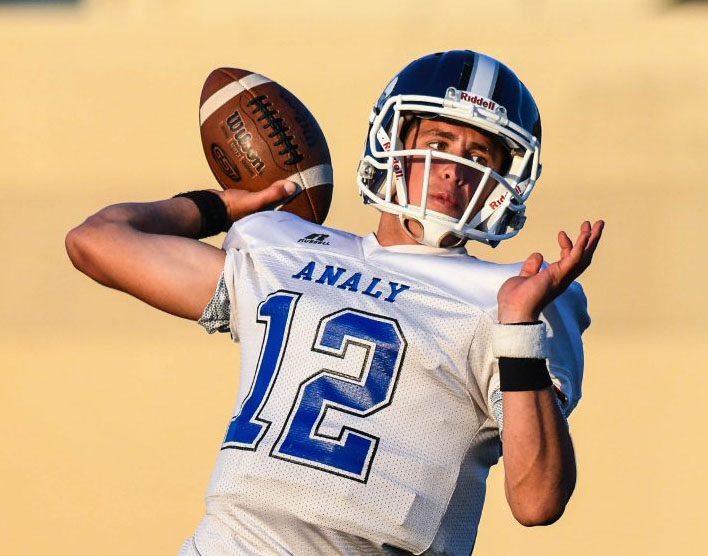 By Michael Baribault
LAST TUNEUP BEFORE LEAGUE
Local teams will play their final non league games this weekend. Some teams will be playing
tougher opponents as Kennedy (Fremont) Acalanes (Lafayette) and Antioch all come to
Sonoma County on Friday. For most teams, non league games can to determine where they stack up in
their Division’s NCS ranking. For others, it’s a chance to get off to a good start before playing
tough league games. Some, are in both boats.

Game previews
Antioch @ Rancho Cotate ­KSRO 1350, 103.5 Radio Coverage begins at 7:05pm
Alabama commit Najee Harris will be in town as he’ll look to continue his path to the Crimson
Tide against Rancho Cotate. In his last game vs San Leandro, he rushed for 255 yards on 21
carries. He’s averaging 227 yards on the ground in 3 games so far. He’ll be behind QB Williem
Karmthong who’s had a decent year of his own. He’s averaging 186 yards in the air per game so
far. As for Rancho, Jake Simmons had a game to remember, throwing for 6 TDs and 344 yards.
His QB Rating was 118.1. He’ll need to do that again to keep up with this powerful Antioch
offense.


Acalanes @ Analy
Analy suffered their first regular season loss in a little more than 2 years last week vs Newman.
They’ll look to bounce back against Acalanes from Lafayette. Jack Newman will try to continue
his dominant start to the season along with running back Osiris Zamora. This will be their final
game before renewing the league rivalry with Petaluma, who is still looking for their first win.
OTHER GAMES: (all games 7:30 unless noted)
FRIDAY
Windsor @ Hayward, 7pm
University Prep @ Elsie Allen, 6pm
Montgomery @ Sonoma Valley
Kennedy (Fremont) @ Petaluma
Ferndale @ El Molino
SATURDAY
Galileo @ Piner, 1:30
Healdsburg @ Emeryville, 2:00
Share
Copyright (c) 2016 Splash.
Theme by StylemixThemes.