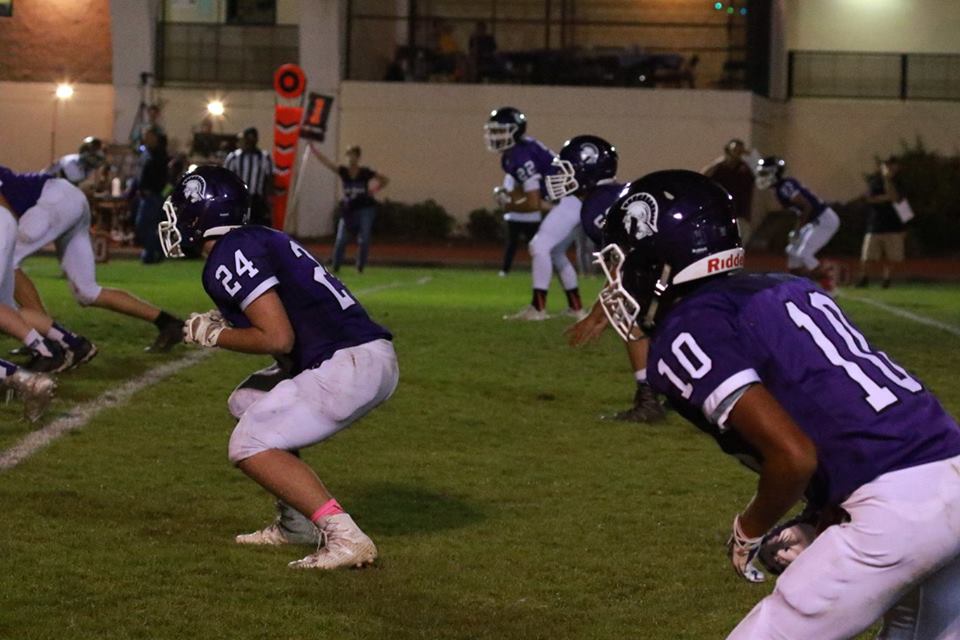 Petaluma’s defense conducted their fourth consecutive shutout on Friday, topping El Molino 35-0.
In the first half, it was their offense that stole the show. Connor Richardson had another 1-yard touchdown run, Erick Diaz had a 69 touchdown run, and Dominic Christobal had two touchdown runs of 65 and 22 yards. He finished with 135 yards on 18 carries. Hayden Fehler also had another touchdown reception late in the first half.
Defensively, it was the usual suspects that got in on the shutout. Justen Santa, Luke Haggard, and Xavier Crysdale led a defensive line that got a good push all night. Linebackers Eric Coats, and Connor Richardson were flying to the ball, and defensive back Trey Davis had another interception.
In the fourth quarter, El Molino got all the way to the Petaluma 3-yard line, but a few plays with yard loss forced the Lions to try for a field goal with 5:10 to go. Jack Fricker kicked the ball as they Trojan crowd was screaming as loud as they could to try and protect the shutout. His kick sailed right and hit the right goal post and the Trojans had completed their fourth straight shutout.
Santa Rosa challenged Rancho Cotate all the way to the final whistle as they fell to the Cougars 55-53 in one of the better games of the season. Isiah Steele had an enormous game. He threw for 452 yards and five touchdowns. Cassius Banks caught the ball nine times for 201 yards and two touchdowns.
For Rancho, Jake Simmons was 16-28 for 263 yards and two touchdowns. Rancho keeps pace with Cardinal Newman and is on pace to have an NBL Title showdown on Nov 4th at Rancho.

North Bay League:
Cardinal Newman-Windsor recap Here
Casa Grande completed another comeback with a touchdown and two-point conversion with 17 seconds left to stun the Vikings 25-24. Garrett Bufo connected with Clay Smedshammer for the touchdown, and then with Mikey Moriarty for the two-point PAT. The Gauchos are now 3-5 and 2-3 in NBL play.
Ukiah kept up their surprise season with a 30-21 win over Maria Carrillo. Brett Hofsetter threw for 247 yards and 2 touchdowns. Ukiah hosts Montgomery next week.

Sonoma County League
Analy built a 42-0 lead after one quarter and won 70-0 over Healdsburg. Jack Newman threw for 295 yards and four touchdowns. Christian Fajardo ran for 137 yards on seven carries.
Sonoma’s Juan Zaragoza hit a 20-yard field goal to give the Dragons a 17-14 win over the Piner Prospectors. Piner had the ball on their own 10-yard line, and on the first play, they ran it all the way to the Dragon 3-yard line. However, three straight stops gave the ball to Sonoma for the eventual game winning drive.
Share
Copyright (c) 2016 Splash.
Theme by StylemixThemes.