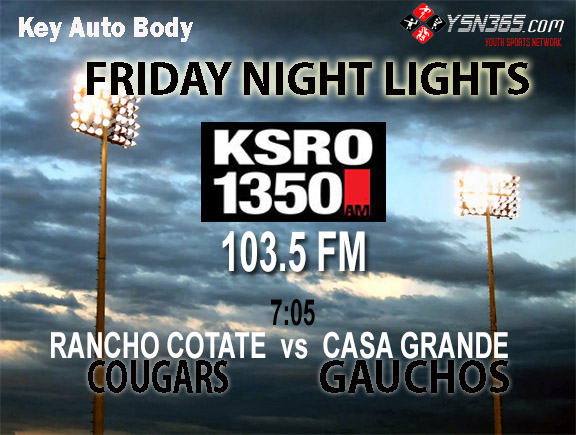 The KSRO Game of the Week is Rancho Cotate vs. Casa Grande.
The actual game of the week is probably Cloverdale at St. Helena.
The game of the week that tugs at the heart is Middletown at Lower Lake.
Middletown has become the area team. People are coming from all angles to help try to get that area back on its feet. It will take a while for that to happen, but a start is Friday Night with some high school football.
If things were normal, last week would have been Middletown’s homecoming. That of course didn’t happen.
If things were normal, Lower Lake would be hoping this is 2007. That is the last time they beat Middletown, in a year they won a league championship.

When looking the NCL World, Middletown is one of the teams people look at. They are usually a contender and more times than not more than that. Since 2001, Middletown has won nine league championships.
Lower Lake is usually at the other end. Since 2001 they have finished over .500 once, that was the magic year in 2007, which seemed to come from nowhere. The three years before that they went 2-28 overall and lost all fourteen league games.
This year they had a chance. A chance that is, at the very least, of beating Middletown. You can almost bet some had the Middletown game circled. On their Max Preps page, Middletown is the rivalry game. The hope was rising even more with Middletown’s 0-2 start.
That was when things were normal.
The new normal is that everybody is happy that a game will be play at all and Middletown will be welcomed with open arms.
NORTH BAY LEAGUE (ALL GAMES FRIDAY AT 7:30)
No. 2 Cardinal Newman (1-2) at Santa Rosa (2-1)
No. 3 Rancho Cotate (2-1) vs. Casa Grande (0-3) at SRJC…(KSRO GAME OF THE WEEK…PREGAME 7:05)
Montgomery (0-3) at No. 6 Maria Carrillo (2-1)
No. 7 Windsor (2-1) at Ukiah (1-2)
If you are in the mindset that the NBL championship will be decided on October 9th, you have history on your side. That is the night Rancho Cotate travels to Cardinal Newman and recent history tells us the winner of that game will win take the league crown.
In three of the last five and five of the last eight years, the Cardinal Newman-Rancho Cotate winner has won the NBL championship. Not only that, in all but one of those years they finished 1-2, the winner going undefeated in league play and it was the loser’s only loss.
The one year it didn’t play by that script was last year. Rancho Cotate defeated Cardinal Newman in an epic 45-38 overtime game. That was the third league game and felt like the game that would decide the NBL championship. But the following week, Maria Carrillo played spoiler defeating Rancho Cotate 34-28. Rancho Cotate and Cardinal Newman won out and ended up sharing the league crown. It was the first time since 2005 that the league champion didn’t finish undefeated. In that season too, Cardinal Newman and Rancho Cotate finished one-two.


Overall, five of the eight teams go into NBL play under .500 and two of them are looking for their first win. Part of the reason for that is the NBL plays the second toughest non-league schedule in the section. The league that played the toughest is the Bay Valley, which is a six teams league that are all in Division 1.
The best example of the tough schedule is Casa Grande. They had the third toughest schedule of any team in the North Coast Section. Only De La Salle and San Leandro had a tougher one. They have paid for it with a 0-3 start, which is what they started last season. Actually they started 0-5, but had a big finish and ending up winning a NCS playoff game.
Casa Grande gets the first shot at one of the league favorites with a home game with Rancho Cotate. The game is at SRJC, one of three of Casa’s homes away from home while their stadium gets a face lift. Casa Grande opens league play with three “home” games. The next two will be at Petaluma High School.
Six of the eight teams had last week off. The two that played, wish they hadn’t. That is Rancho Cotate and Santa Rosa, who both lost one sided games. It was both team’s first loss of the season after a 2-0 start. Santa Rosa hosts Cardinal Newman, who after winning its first game, lost the next two.
Ukiah is the only team that won the last game they played. That was a 45-12 win over Piner two weeks ago, which is their only win in three games. They host Windsor, who has had two weeks to sit on a 40-3 loss to Miramonte which dropped them to 2-1.
Montgomery is looking for its first win at Maria Carrillo. The three teams the Vikings have lost to have a combined record of 10-2. Two of the teams are 4-0. They are Analy and Napa, who has also beaten Casa Grande.
Maria Carrillo has lost two straight since opening the season with a 17-7 win over Redwood. One of its losses was also to Analy. They lost that game 27-14, which is the closest game of Analy’s four wins.
SONOMA COUNTY LEAGUE (ALL GAMES FRIDAY AT 7:30)
No. 1 Analy (4-0)…BYE
Sonoma Valley (0-4) at No. 10 Petaluma (2-2)
Piner (2-2) at Elsie Allen (0-3)
Healdsburg (1-2) vs. El Molino (0-3) at Windsor High School

Before league play starts, Analy should apologize to the rest of the league for some of the scores they are going to win games by. Analy has outscored its opponents by an average of 39-17 and based on power rankings, they have one more opponent that is better than any of the teams they have beaten in a 4-0 start. That is Petaluma, who they host to wrap up the regular season on November 6th.
It is expected that Analy not only will win the SCL again, but dominate. To make an impression to the committee picking the North Coast Section Playoffs, they almost have to. Analy’s schedule isn’t going to score many points and neither is the SCL, who of sixteen leagues in the North Coast Section, is rated No. 14.
Analy has won three straight SCL championships. The Tigers last SCL loss was on October 21st, 2011, which was a 10-9 loss to Casa Grande. Yes, it has been so long that Casa Grande was still an SCL team.
Of the other six teams, Petaluma and Piner are the only two of the other six teams that made it out of league play not under .500, both going 2-2.
Petaluma started 0-2, before winning its last two games by a combined score of 63-13.
Piner’s sandwiched its wins around two straight losses.
Both are meeting teams looking for their first win.
The Healdsburg-El Molino game has some irony to it. El Molino’s field is also getting a face lift and they are playing their home games at Windsor, which is the real home of  Healdsburg’s arch-rival when both teams were in the SCL.
NCL I
No. 8 Cloverdale (3-0) at No. 4 St. Helena (3-0)
No. 9 Willits (3-0) at Kelseyville (1-2)
Middletown (0-2) at Lower Lake (3-0)
Clear Lake (0-3, 0-1) at South Fork (1-2)
No. 5 Fort Bragg (3-0)
Considering how big these schools are and that there are no private schools, this league has reached about as high as they are going to get. They don’t over-schedule, and in some ways, got a break in its scheduling because some of the teams they have played don’t have the record that they thought they would have when they scheduled them. That might be a break now, but it won’t help when the seedings for the NCS playoffs are picked.
Actually the less you mention about the NCS playoffs, the better as far as this league is concerned. It was announced over the weekend that Marin Catholic will join Cardinal Newman in Division 4. That means those two school will join four NCL I teams in the playoffs. Before you add those two teams in Division 4, St. Helena and Fort Bragg, despite both being 4-0, were close to being a bubble teams for a first round home game based on power rankings.
Five of the eight teams go into league play are undefeated. Two of them will meet this Friday when Cloverdale travels to St. Helena. St. Helena is the defending co-champion along with Fort Bragg.
The league’s two winless teams might disagree with the scheduling comment. They have had the league’s two toughest schedules. Middletown’s opponents have a combined record of 4-2. Clear Lake’s opponents are a combined 11-1.
One of Clear Lake’s losses opened league play last week, that was a 53-6 loss to Fort Bragg. Both teams have a league bye this week. Clear Lake travels to South Fork. Fort Bragg has the week off.
BAY FOOTBALL LEAGUE
St. Vincent (1-3) at Balboa (0-2)…Saturday 2 pm
St. Vincent starts league play next week.
NCL III
Anderson Valley (3-0) at Laytonville (0-2)…Friday 6 pm
Calistoga (3-0) at Potter Valley (0-3)…Friday 7:30
Point Arena (1-1) at Mendocino (1-2)…Saturday 1 pm
Tomales (2-1) at Rincon Valley Christian (0-2)…Saturday 1 pm
Upper Lake (2-1) BYE
Anderson Valley and Calistoga are the only two teams left undefeated. They don’t meet until October 16th.
JC
No. 24 SRJC (2-1) at No 18 Laney (2-1)…FRIDAY 7 PM
SRJC is coming off a super win, rallying to edge Sac City 30-29. The quarterback issue may have been decided after Vincent Jefferies passed for 424 yards and four touchdowns.
This is the first of four straight games SRJC will meet currently ranked teams. The next three are in the top eight.
Laney’s lone loss is to No. 3 San Francisco 28-0. In its opener Laney defeated Sac City 21-13.
My email address is jacpasquini@comcast.net
Share