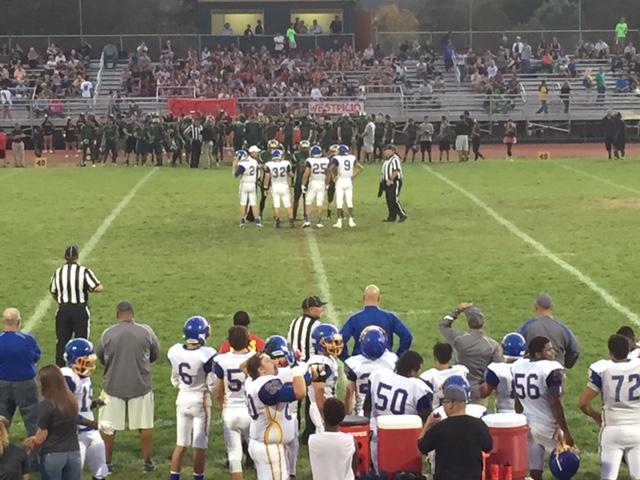 This page is about high school sports, but before getting to that, the best to the people of Lake County. What a horrible summer and it seems to be getting worse. Best wishes and here is hoping something changes and changes quickly.
Words just can’t say it.


ST. HELENA BIG WIN
It was reported after last week’s game that St. Helena broke a school record with 561 yards rushing. This hasn’t been confirmed, but still 561 yards, that is a lot. Just like the Saint offense overall, which hit the 50 point mark in a 2-0 start.
It wasn’t expected to be that easy with a trip to Winters on the schedule. The first thing that would take the spunk out of any offense was the 95 degree game time weather.
It wasn’t easy, not at all, and that makes the win even more impressive than those first two things.
Winters is a quality win. They are the winners of two straight Northern Section Championships. Last season they went 12-1, with St. Helena handling them the loss.
Things didn’t look good most of the game. Things got on the desperate side when St. Helena fumbled the second half kickoff, which set up a Winters score and the Saints had a 14-3 deficit staring them in the face. The offense that was running all over the place the first two weeks, was barely moving in this one. They didn’t have 100 yards in total offense in the first half.
Falling behind 14-3 acted as a wakeup call. St. Helena followed that with a 15 play drive that ended in a touchdown to cut the lead to 14-9. .
Then midway through the fourth quarter, running back Jahaiver Otero had his first big run of the night, going 40 yards, which set up his own 5 yard score to give St. Helena the lead.
A four down pass interference penalty helped Winters get the ball past midfield, but they couldn’t convert the next fourth down play and the Saints were 3-0.
NOT TIME TO GIVE UP
It wasn’t a big surprise that Clayton Valley Charter defeated Cardinal Newman. The surprise was the score of 28-0. It was the first time Cardinal Newman was shutout in three years. If you think that is horrible news for Cardinal Newman, not really. The last time they were shutout was on September 17, 2011. It was the second game of the season and it was 34-0 to Valley Christian. They would lose the next week to Palma 31-7, which dropped them to 1-2, which is what they are now. They followed that up by winning eleven of their next twelve and took a NCS Championship. The loss in the streak was to Rancho Cotate 27-21 in OT, which decided the NBL championship.
As far as this game went it was scoreless halfway through the second quarter. It actually looked like it could be scoreless by the half. Then disaster struck. After Clayton Valley Charter scored the game’s first touchdown, Cardinal Newman misplayed the kickoff. Clayton Valley Charter recovered and scored and it was 14-0 at the half.
Cardinal Newman looks out of place at 1-2. But they have been there before.

HOME SWEET HOME
For 2015, Rancho Cotate High School is part Cougar and part Tiger. With Analy’s football field out of commission for this season, so its home games are at Rancho Cotate. The first “home” game for Analy was Saturday Night and the Tigers felt right at home with a 42-7 win over Montgomery to raise their record to 3-0. Twenty four hours earlier Rancho Cotate defeated Vanden 40-14. It was the second home win of the season for Rancho Cotate. The average score of the three home wins is 45-13.
It was a long night for Rancho Cotate. The Vanden JV team was late, which had everything running late. The Varsity game didn’t end until after 11 pm.
NICE REBOUND
Both SRJC and Butte wanted to take a major advance after disappointing openers. Both teams did that, well for a half anyway. The first half belonged to SRJC, the second half to Butte.
In the end, the game belonged to SRJC as they held on for a 23-20 win. SRJC did all its scoring in the first half. Butte did all its scoring in the second.
Vincent Jefferies threw for one touchdown and ran for another.
SRJC is 1-1 and hosts Sacramento City next week.
SCOREBOARD
No. 1 Rancho Cotate 40 Vanden 14
Clayton Valley Charter 28 No. 2 Cardinal Newman 0
No. 3 Analy 42 Montgomery 7
Miramonte 40 No. 4 Windsor 3
No. 5 St. Helena 15 Winters 14
Benicia 51 No. 6 Maria Carrillo 28 (Watch the Full Game Video- Click Here)
No. 7 Fort Bragg 36 El Molino 0
No. 10 Santa Rosa 31 Fremont 9
OTHER GAMES
Berean Christian 49 Middletown 22
Franklin 28 Casa Grande 7
Colusa 34 Clear Lake 0
Lower Lake 21 Healdsburg 14
San Marin 50 Sonoma Valley 7
Petaluma 24 San Marin 0
Ukiah 45 Piner 12
St. Vincent 48 San Rafael 20
No. 8 Willits (2-0), No. 9 Cloverdale (2-0), Kelseyville (0-2) BYE
NCL III (ALL ARE LEAGUE GAMES)
Tomales 42 Laytonville 28
Mendocino 28 Potter Valley 16
Anderson Valley 66 at Point Arena 8
Calistoga 54 Upper Lake 16
Rincon Valley Christian (0-1)…BYE
JC FOOTBALL
SRJC 23 Butte 20
My email address is jacpasquini@comcast.net
Share