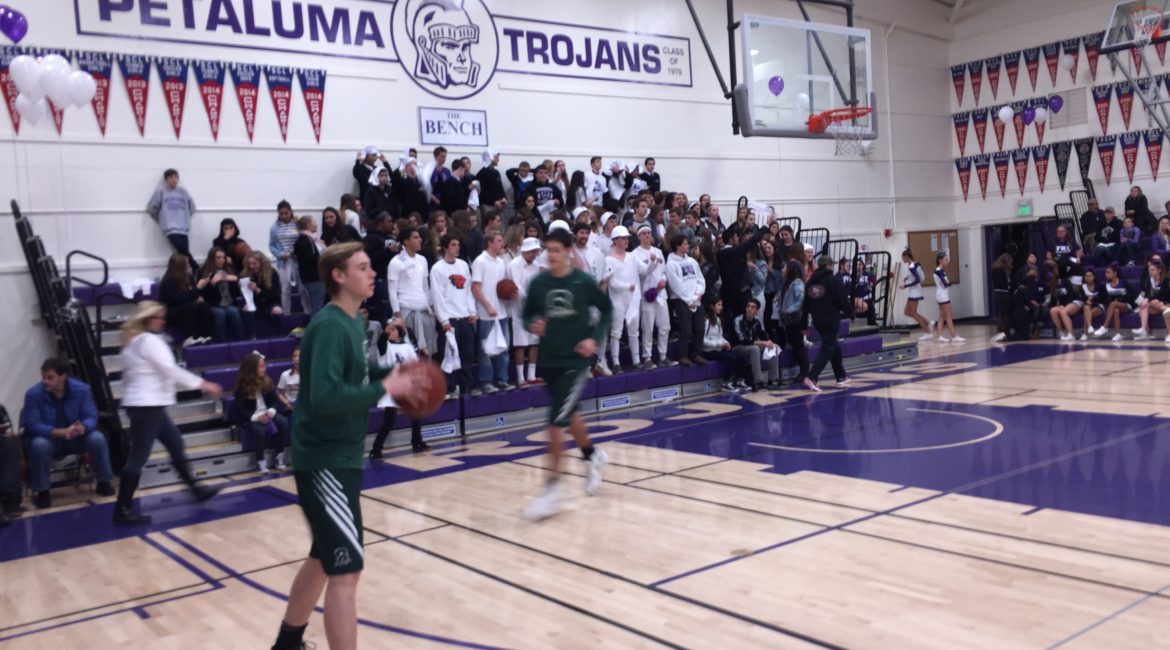 The NBL has a different feel to it this season. When scouting the league race, you usually just say the race will be between Cardinal Newman and Montgomery and you pretty much have the bases covered. Then when they play, it is in front of a Standing Room Only crowd.


The two teams played last week and for the first time in many seasons, they aren’t considered the league favorite. The game was at Cardinal Newman and it wasn’t in front of a Standing Room Only Crowd. The Standing Room Only crowd might be coming next when No. 1 and league favorite Windsor is at Cardinal Newman. That game is Wednesday night and it is between the only two teams that made it to 2-0 in league play.
No. 2 Cardinal Newman defeated No. 4 Montgomery, and then followed up with a win over Rancho Cotate. Cardinal Newman has improved over the last month and they are getting healthier. In the win over Rancho Cotate, last year’s NBL Player of the  Year Connor Rubattino played his first game and it looks like he is ready to go, scoring a game high 14 points. Rubattino was injured while playing for the Cardinal Newman football team.
Windsor looks comfortable in the role as league favorite. They also started league play with two wins and they were impressive. In both games they jumped out to early leads and weren’t threatened.
On Wednesday, it was a trip to Ukiah in which Gabe Knight just missed a double-double with 22 points and nine rebounds in a 70-47 win. Then on Friday at home against Santa Rosa, they scored the first nine points and led 25-6 after one. By halftime, they had a thirty point lead before cruising home to a 66-32 win.
Overall Windsor is 11-3 while Cardinal Newman is 9-4. There is a good chance that when they meet on Wednesday it will between No. 1 and No. 2 in the YSN365.com rankings.

TEST TIME
Two SCL teams are 2-0, one expected, the other not so expected.
The expected is No. 3 Analy, who after surviving an Overtime win over Sonoma Valley on Thursday, had a one sided win over Piner on Saturday. Analy is 11-4 overall.
In the win over Sonoma Valley, the Tigers rallied from a nine point halftime deficit. Aidan Toner-Rodgers was the games leading scorer with 20 points. He followed that up with a 24 point game in the 69-48 win over Piner on Saturday.
The surprise team is Petaluma, who also won its first two league games and they did it in impressive fashion, both 20+ point home wins . Petaluma had a three win week to raise its record to 9-5. That was a nice bounce back after a three game losing streak.
In the three wins, Petaluma had three different players hit the 20 point mark. Ryan Perez scored it twice, actually scoring 25 twice. The first time in the league opening win over El Molino and then the next night in a non-league win over Vintage.
The win over Vintage was the most impressive win of the week. It was a game they trailed most of the way and rallied for the win. That is a win that will help come NCS playoff seeding time and yes we are talking about playoff seeding for Petaluma. Vintage is 9-7 on the season and has an OT win over Casa Grande. One of the losses was to Santa Rosa.
Actually the turnaround at Petaluma has them thinking SCL title. They face a severe test this next week and a half going on the road to Piner, Analy and Elsie Allen.

UPSET CITY
Another race that is usually easy to call is the NCL I. Just take Cloverdale, and that is either in the Boys or Girls races.
Hold that thought too.
On Friday the two Cloverdale teams met Kelseyville, the Boys on the Road and the Girls at home. Both were considered normal NCL I wins for Cloverdale.
Surprise!!!!
Kelseyville Boys came away with a 41-40 win. A big second quarter gave them a nine point halftime lead and they held on. Hunter Beatty scored his only points on the night with :10 left to put it away. Cloverdale hit a three as time ran out. Both teams are 1-1 in league play.
Fort Bragg defeated Kelseyville on Tuesday Night and followed that up with a win at Willits on Friday and is 2-0. Lower Lake is also 2-0 at travel to Fort Bragg Tuesday Night.
The Kelseyville Girls won a thriller at Cloverdale, going two overtimes for a 55-54 win. Kelseyville finished the game with only three players because five had fouled out and they still took the win. Freshman Payton Conrad scored 18 points.
The Cloverdale Girls weren’t clear cut favorites in the NCL I race. Actually Middletown was ranked higher in YSN365.com rankings at No. 5.
Middletown and Kelseyville are the only two teams in the league to make it to 2-0.
My email address is jacpasquini@comcast.net
Share