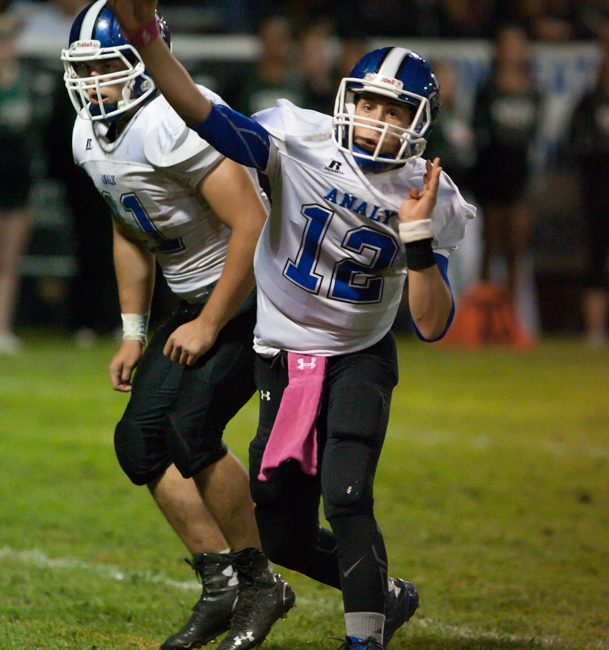 Josh Groesbeck (Maria Carrillo)…For the second straight week he scored the game winner in a one point win. This one a 17 yard run with four minutes left in a 28-27 win over Casa Grande. It was one of his two touchdowns on a night in which he gained 123 yards on twenty carries.


Cole Martin (Maria Carrillo)…He set up Groesbeck with a big third quarter starting with a 98 yard kickoff kickoff return that started the second half which made it 14-14. Later in the quarter he also had a 9 yard run which gave Maria Carrillo its first lead.
JJ Anderson (Casa Grande)…Had a big night going 28 for 48 for 304 yards and four touchdowns, all season highs. Unfortunately he also had a season high five interceptions.
Max Yantovich (Sonoma Valley)…In the first win of the season he caught two fourth quarter touchdowns for a 14-7 rally win over Healdsburg. His last touchdown was from 22 yards with nine seconds left.
Osiris Zamora (Analy)…Scored four touchdowns in a 48-6 win over El Molino. He rushed for two and caught two. His rushing yards was 178 yards on ten carries. The receiving yards 83 on three catches. On the season he has scored 18 touchdowns.
Jack Newman (Analy)…Passed for 175 yards and three touchdowns. That puts him over 2,000 yards for the season.
Analy Defense…The Tigers are giving up an average of 11.8 a game, which is second in the area. Isaac Kangas is the leading tackler averaging over ten a game and has blocked two field goals. Kyle Johnson has intercepted a team high four passes and Jordan Parks has a team high five sacks.
Josh Wright (El Molino)…For the second straight week he scored a touchdown which avoided a shutout. This one was a 95 yard kickoff return that opened the game. It was the second time all season that Analy was behind and the first time in SCL play.

Damien Wallace (Cardinal Newman…Four touchdown receptions, all in the first half in a 46-0 win over Ukiah. His four touchdowns equaled 83 yards. To add icing on the cake, he returned the second half kickoff 95 yards for another score.
Dan Shelton (Rancho Cotate)…Rushed 12 times for 165 yards and three touchdowns in a 42-14 win over Windsor. His touchdowns were from 1, 50 and 89. The 89 yard run made it a 21-7 game in the third quarter. He went into the game for the season with 155 yards and two touchdowns.
Chris Taylor Yamanoha (Rancho Cotate)…How can we leave him off after that play? He did have seven catches for 107 yards and two touchdowns. He has scored 16 touchdowns. He also had an interception which was his fifth of the season.
Luke Bernardi (Cloverdale)…Rushed for 209 yards and a touchdown in a 42-6 win over Lower Lake. It is the third time in four games he has gone over the 200 yard mark.
Ty Chorjel (Middletown)…Rushed for 73 yards on 16 carries and scored the only touchdown in a 7-0 win over Kelseyville. He also had 12 tackles to help a Middletown defense that held Kelseyville to 59 yards of total offense.
Paul Bartholow (Rincon Valley Christian)… He gained 164 yards and scored four touchdowns in a 75-34 win over Laytonville. He also had all the team’s passing yardage of 102 on six catches and also had an interception.
Willie Maples (Rincon Valley Christian)…He made it quite a one-two punch for the RVC running game going for 162 yards and three touchdowns. The sophomore has ten touchdowns on the season. Rincon Valley Christian rushed for a season high 401 yards to even its NCL III record at 2-2.
Lucas Dentoni (Petaluma)…123 yards and three touchdowns in a 59-9 win over Elsie Allen. He scored three of the first four touchdowns and went over the 1,000 yard mark on the season.
Kaylor Sullivan (Fort Bragg)…Of course he has to be here despite the score of the game. It is his third 500 yard passing game, this one for 536, which has been reported as a Redwood Empire Record. He also threw eight touchdowns. His numbers on the season are now 3,100 and 39 TD’s.
Lucas Triplett (Fort Bragg)…The No. 1 receiver had nine catches for 123 yards and a touchdown. It was his 15th touchdown reception of the season and put him over the 1,000 yard receiving mark.
It takes some work to find notable performances and something can be easily missed. If you see one at a game you are at give, me a heads up.
My email is jacpasquini@comcast.net
Share