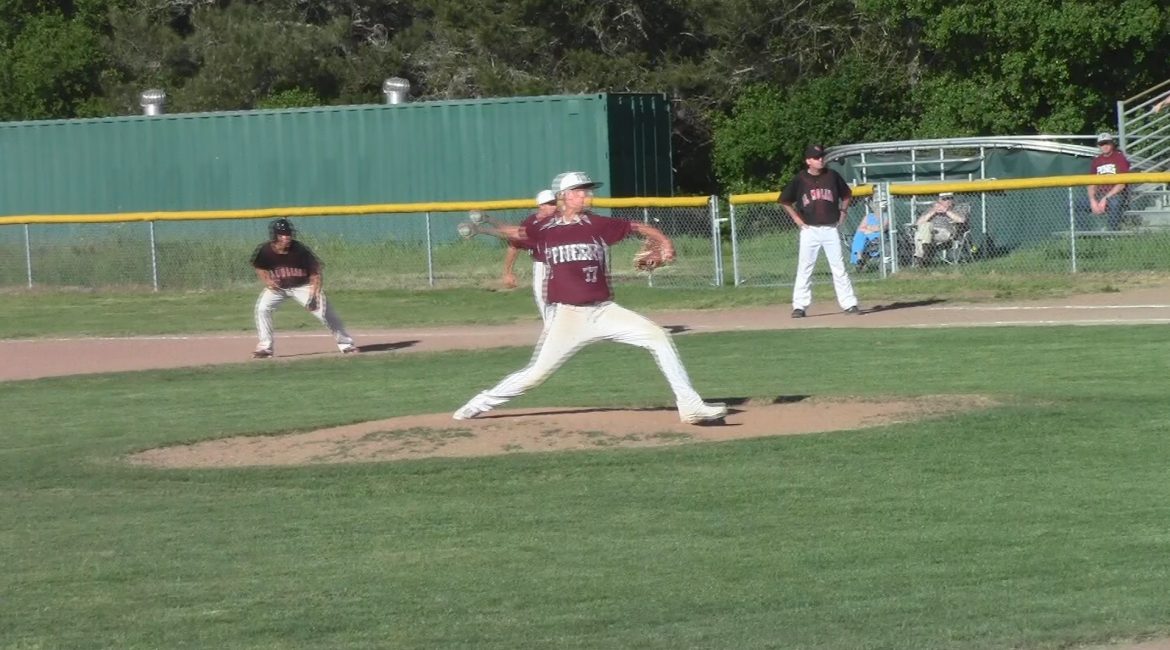 Now that the remarkable run by Casa Grande of one run wins has ended, another pattern is playing out that although is not as remarkable, is pretty rare in most leagues that we cover here.

We are over halfway through those races and every race, except for one, has a first place team that is still undefeated.  The only one that doesn’t is the NBL Softball race, where Maria Carrillo is in first place with one loss.

Historians on the subject would know better, but based on a small sample size, an undefeated league champion, is rare, at least for the Big School world.

The small sample size goes back to 2006, which is how far back MaxPrep goes back.   Before 2009 in the NBL and SCL baseball races everybody played each other three times, instead of the two times they play now.  I am not sure how long that went on but the guess is going undefeated in around twenty league games would be very very rare.

The NBL or SCL Baseball Leagues hasn’t had an undefeated team since 2006.

Cardinal Newman came close twice going 13-1 in 2009 and 2012.   Well they really didn’t come close in 2009, because its loss was the first league game of the season to Montgomery.

It was Montgomery that came close in that season, going into the last regular season game 13-0.   They were at Cardinal Newman in a game that was postponed several times because of rain.  Once it finaly was played Cardinal Newman took a 2-1 win.

Sonoma Valley came close last year in SCL Baseball going 11-1.   They started 10-0, before losing to Casa Grande 18-7.  That was such an out of character result for Sonoma Valley last season, in the eleven league wins they gave up 23 runs.

In the Softball and NCL world the undefeated thing happens more often.

Rancho Cotate had a 28 game league winning streak snapped when they lost to Santa Rosa 8-7 on April 16th.  Last week’s loss to Maria Carrillo means Rancho Cotate has two league losses for the first time since 2009 when they went 12-2.  Both losses were to Montgomery who went 14-0.  So that is two undefeated seasons in the last five seasons.

In the SCL Softball race Petaluma is 7-0, after going 11-1 last year, the only loss to Windsor 6-1.  Windsor is the last SCL softball team to go undefeated.  They did that in 2008.

The NCL world is harder to track because they have had a lot of realignment and some of the schools don’t report its scores all that much.

The St. Helena Baseball team and Cloverdale Softball team are both 9-0 in the NCL I races.  The last team to go undefeated in baseball was Cloverdale in 2007 and 2008 (more on why below).

It is rare when the NCL I Softball race doesn’t have an undefeated team.  Clear Lake did it last season and Fort Bragg the two before that.

Both the St. Vincent baseball and softball teams likes that the latest realignment landed them in the NCL II.  Both teams last league loss was in 2011, when they were in the NCL I South.

Mitch Delfino had quite a weekend.   The Cloverdale Graduate, who was a 20th round pick last year by the Giants, is playing for the Augusta Greenjackets who are a Class A team.

Last Friday he hit his first professional homer, a grand slam no less, as Augusta defeated Lexington 12-1.  The homer came in the fifth inning.

It took Delfino 83 at bats to hit his first homer.  The second homer came eight at bats and about 24 hours later.  In the tenth inning on Saturday he hit a three run shot in a 12-6 win.  That was part of three game weekend when he went 7-15, with the two homers and ten RBI to raise his season average to .274.

Delfino graduated from Cloverdale in 2009.  He was part of quite a pitching staff that included Robby Rowland who is in the Pittsburgh Pirate organization.

Delfino then went to California when it was announced that the baseball program was going to be terminated.   An outcry (and some donations) kept the baseball team alive and then the following season in 2011, they made a near miracle run to make the College World Series for the first time in two decades.

Mitch and his dad, who also is a Cloverdale graduate and current Athletic Director at the school, are long time Giant fans.

SRJC will host a best of three series starting Friday at 2:30.   Games 2 and 3 (if necessary) will be played on Saturday.  They don’t know who they play yet. The College of Sequoias will meet Modesto in a play in game on Tuesday with the winner coming to Santa Rosa on Friday.

SRJC ended the regular season 28-6-1 and are one of five teams from the Big 8 in the state playoffs.    Sierra, who tied SRJC for the Big 8 championship, is a No. 2 seed.  Also is San Joaquin Delta at No. 6, Sacramento City at No. 12 and Modesto who at No. 16 is hosting that play-in game for the shot at SRJC.

Last year the Sonoma State baseball team got off to a big start, and then lost ten of eleven which cost them a CCAA championship and a berth in the NCAA playoffs.

This year they are going the other way.  They are riding a seven game winning streak, which all have come over National Ranked teams.   This weekend they swept a four game series against No. 6 Chico State, it was the first sweep over them since 1993.

Sonoma State is 31-15 and when the National Rankings come out this week they should have a number by its name.

The more important number is the official Western Regional rankings.  Last week they were No. 3 and that was before the sweep of Chico.  The top six will qualify for the Western Regionals.

SSU ends its regular season this week at Cal State Dominguez.  The week after that will be the CCAA post season tournament, and if all that works out, next would be the NCAA Western Regionals.

We got a few comments on last weeks rankings and they weren’t compliments.

But we try again anyway.

No. 1 Casa Grande…No debate here.  They are on the verge of wrapping up the NBL championship.  A 7-1 win, a little boring don’t you think?  Actually what a relief that last four innings must have been after nine games of nail biters.

No. 2 Analy…Had some perfection as in the perfect game by Dominic Padella.  They are also perfect in SCL play and are also close to wrapping things up.

No. 3 Piner…This one has gotten some gulps, but they have earned it.  Nice win over a good Sonoma Valley team on the road.  Has Analy at home on Tuesday.

No. 4 Cardinal Newman…Impressive week in which they went on the road for two wins.  They have won seven of nine, with the two losses by one run to Casa Grande and Maria Carrillo.

No. 5 Maria Carrillo…Best week of the season with two big wins.  The Pumas had its biggest offensive output of the season in a 16-4 win over Windsor.  That was a day after they blanked Rancho Cotate 7-0.

No. 1 Petaluma…The Trojans don’t have much competition in the SCL.  They have outscored its last five opponents 56-0.  Only time will tell how that will affect them come NCS time.  Saturday they host Alhambra, whose is 15-1-1 on the season and also in Division 2.  Looks like winner will be No. 1 in NCS Division 2 playoffs.

No. 2 Maria Carrillo…The Pumas do have competition in the NBL and a big seventh inning rally gives them as big of win over Rancho Cotate. Just in case you were wondering Maria Carrillo has won eight of nine.  The loss was to Petaluma.

No. 3 Rancho Cotate…They have two league losses for the first time since 2009.  In both losses they went into the seventh with the lead.

No. 4 Santa Rosa…Five game winning streak including one of those seventh inning wins over Rancho Cotate.  They still play the two teams ahead of them in the standings and Casa Grande, who they are in a virtual tie for third place with.

No. 5 Cloverdale…Having the Eagles in this list got some comment also.  I guess it’s a small school so they can’t be here.  They have two losses, one to Petaluma, one to Salesian, who is 14-1.  Despite the win and the record, Salesian is behind Cloverdale in the Power Rankings.  In the NCS power rankings when you mix in all the schools together, Cloverdale is No. 21.  Santa Rosa is at No. 20, Rancho Cotate is at No. 19.

Santa Rosa at No. 1 Casa Grande…With a win Casa Grande cinches a tie for the league championship.   Add to it if Cardinal Newman losses the race is officially over.

No. 1 Casa Grande at Rancho Cotate…obviously a big game week for the Ranch.

No. 2 Analy at No. 3 Piner…Analy can all but put away SCL championship.

No. 4 Santa Rosa at Casa Grande…Neither team can afford loss if they are going to rally and win NBL.

NO. 1 SRJC HOSTS THE WINNER OF TUESDAY GAME BETWEEN NO. 17 SEQUOIAS AND NO. 16 MODESTO