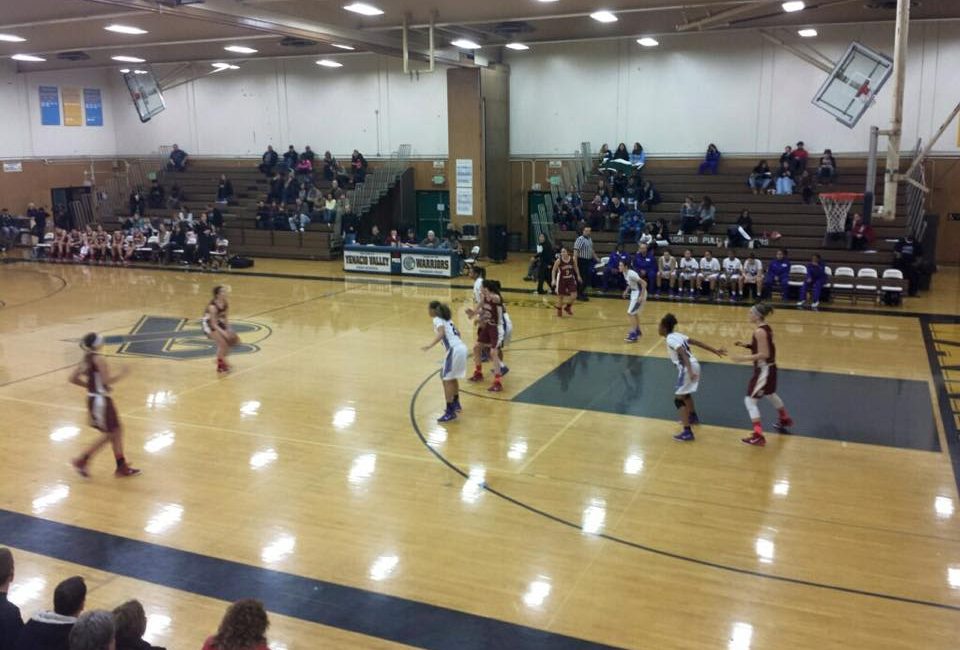 It was mostly a disappointing day for the local teams in the first round of the West Coast Jamboree.  Eleven local teams are in the tournament and on Day One they went 4-7.
Three of the top four teams in the YSN365.com rankings and four of five overall, lost.
The only ranked team to win was No. 2 Santa Rosa, who won despite playing without its leading scorer Devin Murray, who is still out with a concussion.  Santa Rosa hopes to have her back for its Pre-League finale against Heritage on Friday.
Emily Codding and Kylie Oden picked up the slack, combining for 47 points as Santa Rosa defeated Christian Brothers of Sacramento 63-57.  Codding was 7 of 11 from the field, including 6 of 7 from two point range.  The 6’ sophomore also pulled down 14 rebounds and had six blocked shots.
Oden was four of five from three point range, as Santa Rosa held on after letting a ten point lead slip away in the third quarter and raised its record to 6-3.
Santa Rosa will meet Lick Wilmerding, in the second round of the Onyx Bracket on Monday at 5 pm.  The game will be at Freedom High School.  Lick Wilmerding, a Division 4 school, defeated Centennial of Bakersfield 53-49 to raise its record to 5-2.  Centennial is a Division 1 team and drops to 4-5 on the season.
No. 1 Cardinal Newman was edged by Sacramento 52-49 to drop to 6-3 on the season.  The reward isn’t a pretty one, as up next in the Consolation round of the Diamond Division is Division 1 East Bay Power Berkeley.  The Yellowjackets dropped a 60-42 decision to Carondelet.  That game will be on Monday at 2 pm at Ygnacio Valley.
The other ranked teams that lost were No. 3 Casa Grande, No. 4 Ukiah and No. 9 Windsor.
Casa Grande, who is in the Opal Division, was edged by Chico 36-33.  Casa Grande outscored Chico 12-0 in the third quarter to take an eight point lead into the fourth.  Chico held the Gauchos to four fourth quarter points to pull out the win.  Junior Joy Jovick led the Gauchos with 18 points and eight rebounds.
It wasn’t all bad news in the Opal Division as Analy defeated McKinleyville 44-39 to get its record to .500 at 5-5.  Analy will meet the Division’s host school Alhambra in the second round on Monday, at 6:30.
Alhambra is also 5-5 on the season after a 58-35 win over Gelena of Nevada, in its first round game.
Casa Grande will meet Hayward at 11 am in the first game of the consolation bracket.
No. 4 Ukiah fell to 7-2 after a 68-46 loss to Crater, Oregon.  Crater is 7-1 on the season.
Ukiah will meet University of San Francisco Monday at College Park High School, at 11 am
No. 9 Windsor fell behind by ten at the half and then was outscored 19-5 in the third quarter as the Jaguars dropped a 48-28 decision to Fresno.  Windsor meets Exeter Monday at 11 am in a consolation game of the Ruby Division.
The teams that weren’t in the opening YSN365.com rankings did better than the ranked teams going 3-2.
Montgomery, Willits and Point Arena all won.
Montgomery jumped out to a twenty point first quarter lead and didn’t look back in a 48-15 win over San Lorenzo. Abbey Lea led the Vikings with ten points.  The Viking are another team at 5-5.
Montgomery will meet Acalanes in the second round on Monday at 5 pm.  The game is at Bentley school.
Acalanes is a Division 3 team and 9-1 on the season.  They have wins over Sonoma Valley, Maria Carrillo and Windsor to get to that record.  In the first round of this tournament they defeated Benicia 60-39.  Benicia is in Division 3 and went into the game 4-0.
Willits raised its record to 2-7, with a 58-12 win over Oakland Military Institute.  The Wolverines meet De Anza in the second round of the Pearl Division Monday at 3:30.
Point Arena is 5-3 after a 28-22 win over Holy Names.  They will meet the host school in the Garnett Bracket, Ygnacio Valley, Monday at 3:30.
The two unranked teams to lose were Cloverdale and St. Helena, who are both in the Topaz Bracket.
Cloverdale was defeated by Sierra 56-40.
St. Helena lost to Las Banos 45-31.
If the two teams do the same thing on Monday, they would meet on Tuesday in either the Consolation Final or the Seventh place game.
My email address is jacpasquini@comcast.net
west coast jamboree,ysn365.com
Share