WHY YOU SHOULD BE SAYING "GO CARDINAL NEWMAN" 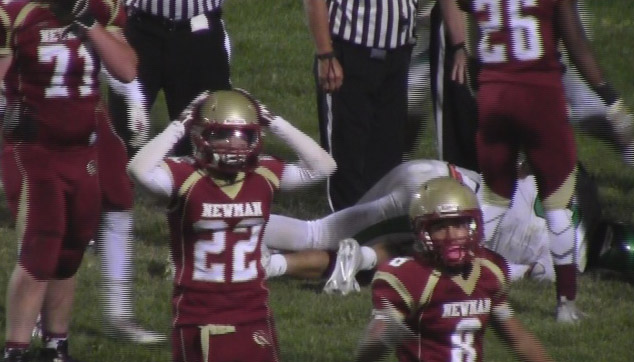 Cardinal Newman is at Clayton Valley Charter, who was one post shy of winning  a state championship last year and is not only considered one of the best teams in the North Coast Section, but in Northern California. A win by Cardinal Newman would help every team in the North Bay Area when it comes to seeding for the playoffs.
The local teams in most sports have claimed a bias for the East Bay when it comes to playoff seedings. That is hard to argue with, but in some ways the East Bay has earned it. They basically dominate this section. It starts with the jewel of the section, which is the De La Salle football team and goes from there. Most section champions and this is in most sports, are won by schools from the East Bay. For example four of the five section football championships last year came from the East Bay. The only one that wasn’t from the East Bay was Justin Siena, who is in Division 4.
Back to why you should be rooting for Cardinal Newman in its game against Clayton Valley Charter tonight. If Cardinal Newman could pull off the upset, it could have a trickle-down effect. The key word is “could”. A win by Cardinal Newman would look good for the whole area. It would make the North Bay League look better and with Analy playing three North Bay League teams in its pre-league schedule, and doing quite well, it could also help the Sonoma County League. Since NCL I teams have had success against SCL teams, it could roll all the way to them.
On the other hand if Cardinal Newman losses to Clayton Valley, the local teams can forget about a fair shake in the playoff proceedings.
That isn’t the only game to keep an eye on. Another one is Miramonte at Windsor. Both teams are in Division 2 and the NCS committee loves head to head when deciding seedings for the NCS playoffs. Power ranking wise, Windsor and Miramonte are No. 3 and 4 in the Division.


I am not a big fan of the state playoffs and never really was. The expansion of the state playoffs seems ill timed. The powers that be keep adding games to the season. Last season there was five state championship games, this year that number goes up to 13. Some teams will play as many as 16 games in a season that starts with practice in early August and will run through mid-December.
Football is under a magnifying glass because of injuries. There are new rules in place about how much contact there can be in practice. Cardinal Newman’s chances of an upset seem to have been hurt because of the concussion injury that is keeping starting quarterback Jordan Brookshire out of the game. High school football made unwanted headlines two weeks ago when a kid from Louisiana died from an injury in a game.
I’m not a big fan of the system either. Cardinal Newman has moved to Division 4 in football and there is a rumor that Marin Catholic is going to do the same thing. There are four NCL I teams in Division 4. There could be a playoff game between one of those NCL I teams and Cardinal Newman. That seems wrong.
It is what it is and if you are a fan of a local team and you are dreaming of a nice run in the state playoffs, for tonight at least, no matter how hard it is for you to do, it should be,”Go Cardinal Newman.”
My email address is jacpasquini@comcast.net
Share