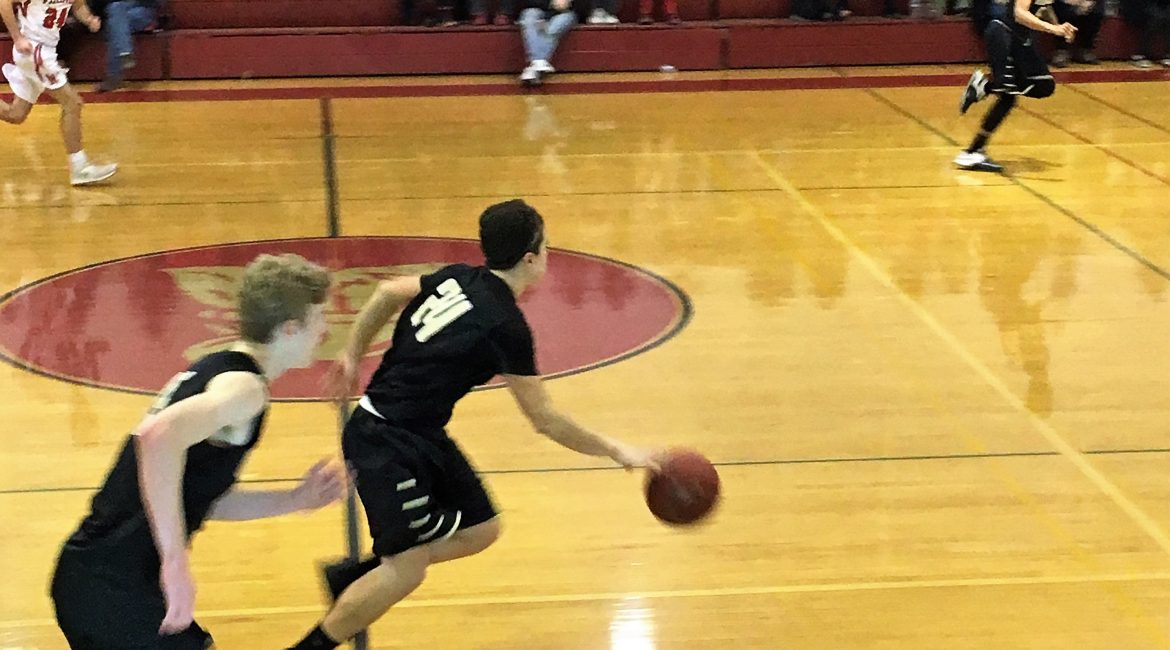 Boasting a 3-1 record in North Bay League play, the Montgomery Vikings clashed with the undefeated (4-0) Windsor Jaguars Tuesday night. In a back-and-forth game where both teams continually traded buckets and exchanged punches, it was Windsor that would emerge victorious with the 56-51 win that came down to the wire.
Vikings junior forward Evan Poulsen got off to a good start early on the offensive end, smoothly knocking down two 3-pointers. He also had a with a ferocious drive down the middle, taking the bump, and finishing for the beautiful and-1 layup with the left hand. Windsor’s Travis Carlozzi had two big buckets down low amongst the trees for the Jaguars to keep the game close. The physicality factor favored Windsor early as they forced the Vikings into the bonus early in the 2nd quarter, but Monty grasped onto a 12-11 lead at the end of 1.
After a trade of baskets, the Jaguars’ lethal 6’4” twin duo of Justin and Riley Smith began to put their offensive stamp on the game. Windsor retook the lead half way through the 2nd quarter at 19-16 after Justin got two clean looks from downtown and buried them both, momentarily silencing the rowdy Viking student section. But Monty sophomore Tyson Timko would stop the bleeding, taking the pass up top, jabbing right, dribbling right, and calmly stroking the straightaway three to tie it up at 19. Kobe Roman put the Jags back on top 21-19 before halftime with a nice post-up and hook shot; a huge momentum swing in a game where every bucket was huge. Neither team could quite pull away from the other.

After Justin Smith kicked off the 3rd quarter with a 3-pointer from up top, Kobe Roman seemed to have an easy putback off a missed shot, but the Vikings’ Ryan Merriken had other plans. Merriken timed his jump perfectly, skying to swat Roman’s shot out of bounds with authority, getting the home crowd on their feet. Riley O’ Neill carried the Vikings offensively in the 3rd quarter, pacing them with eight points, including soaring for an offensive board and sticking it back in, plus the foul. It was 31-29 Montgomery on top at that point, with 3:30 left in the 3rd. However, Justin Smith’s strong drive into the paint for the tough lay-in, along with a Roman 3-pointer, surged the Jags to a 34-33 lead heading into the final eight minutes.
Evan Poulsen began the 4th quarter with a sweet up-and-under scoop layup avoiding traffic, as Alex Soria’s crossover and step-back three, along with a nifty spin cycle and floater in the lane, put the Vikings up 42-41 early on in the period. A desperate Monty team began to press full-court after Windsor scored five straight points to make take the lead 46-42, and eventually ballooning to 50-44 with less than two minutes to play.
Poulsen got a steal in the full-court press, drove in for a layup, but was hammered hard by Riley Smith. He would make the first and miss the second. Monty then resorted to the foul game, Poulsen would later foul out as a result. Free throws proved to be crucial down the stretch, as Windsor was perfect from the line in the final minutes. Ethan Wright nailed two after he was intentionally fouled, while Riley Smith put the game on ice, calmly stroking the game’s final four free throws.
The game featured a total of six ties and a whopping 11 lead changes. Montgomery finished shooting 41% as a team, while Windsor yielded a better field goal percentage of 50%. The Smith twins carried Windsor scoring-wise, combining for 38 points. Montgomery was led by Riley O’ Neill and Evan Poulsen, who tallied 14 and 13 points, respectively. Alex Soria came off the bench to score 11 himself, eight of which came in the 4th quarter.
Montgomery now looks ahead to play Maria Carrillo in their next game. With the win, Windsor now sets up a highly-anticipated battle of undefeateds on Thursday night, when they take on Cardinal Newman at home. Both teams will enter this matchup 5-0 in NBL play with first-place on the line. Tipoff for that game is at 7:30 on Thursday at Windsor High School.
Share
Copyright (c) 2016 Splash.
Theme by StylemixThemes.