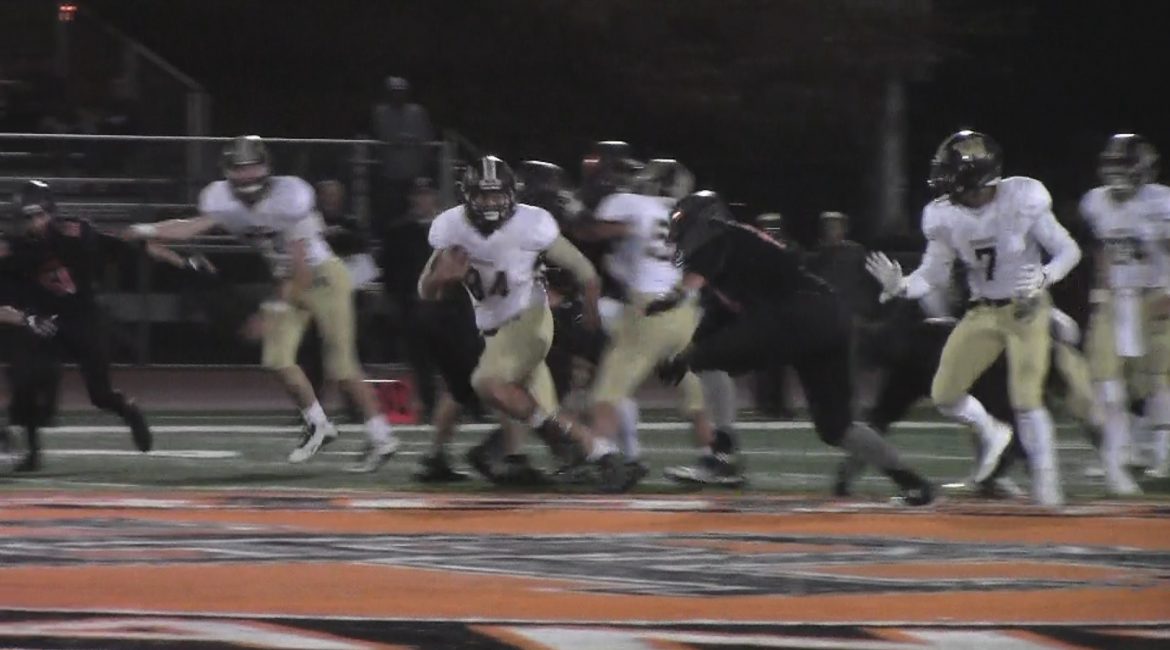 by Dale Watkins
“Operation Ground and Pound” was the name of the game for the Windsor Jaguars, overwhelming the Santa Rosa Panthers in a big 50-26 win on the road.


Running backs Jackson Baughman and David Escarsega made their presence felt from the get-go, as either of the two would receive the handoff and run free on every single play of the Jaguars’ opening drive. If it wasn’t one, it was the other, and Santa Rosa would have no answer for this dynamic duo. They marched 67 yards down the field, capped off by Escarsega punching it in from one yard out.

Panthers senior quarterback Isaiah Steele wasted no time leading his offense, as he fired it to a streaking Cassius Banks along the sideline on the very first play from scrimmage. Banks outran double coverage and was off to the races; an emphatic 64-yard hookup to tie the game.

On the next drive, Banks would take the handoff and bounce it to the outside and into the endzone, making it 14-7 Panthers with 11:20 left in the 2nd quarter.

But then, Jackson Baughman happened.
The senior began to wreck havoc on an otherwise stout Santa Rosa defense. He led the charge in which Windsor reeled off 36 straight points, putting up points as if their eyes were closed. Baughman would plunge ahead four yards for a touchdown to spark the comeback. Then holder Casey Horton would take the direct snap, roll out, and float one over to Joey Pignataro in the back of the endzone for a nifty two-point conversion.
Next, Baughman intercepted a tipped pass by Steele, setting up a screen pass as he evaded tacklers up the sideline to score yet again, this one a 39-yard catch and run. Quarterback Kobe Roman joined in on the action, finding the endzone on a QB keeper from nine yards out.

The Panthers looked up at the scoreboard halfway through the 3rd quarter suddenly finding themselves down 43-14; the air taken right out of the homecoming crowd’s sails.
Carlos Lemus’ shifty 20-yard run would set up a Banks touchdown as he plunged through the pile, while Steele ran it in himself on the next possession to make it a more respectable 43-26 ball game. Steele constantly faced pressure by a relentless Jaguar frontline, either being knocked down, forced to run, forced to throw, or being sacked for loss.

Panther penalties and time of possession both heavily favored the Jaguars as well, playing a huge factor. A Kobe Roman 1-yard touchdown would seal the deal for Windsor as they reached the half-century point mark, a season-high record.
Jackson Baughman proved to be a man amongst boys, racking up 137 yards on 21 rushes, which resulted in four touchdowns. Jaguar kicker Olin Piotter was automatic, nailing all seven of his extra point attempts. Isaiah Steele would still complete 17 out of 32 passes for 231 yards total despite the loss. The versatile Banks tallied 162 all-purpose yards with two touchdowns, as fellow wideout Kalei Aukai finished with 63 yards himself.
Share