With The Good Weather Back…Play Ball 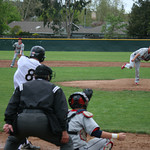 According to the forecast the baseball and softball seasons can resume for the foreseeable future without the worry about the weather.

There are still some make up still pending, but really, considering all the wet stuff we have had over the last couple of weeks, there isn’t as many as you might think.

Monday was makeup day, with two baseball and one softball games played, all from the North Bay League.

In the baseball games, the two winners stayed within range of the top of the league race.

It was also a good pitching performance for No. 8 Montgomery, as Anthony Prince went six innings in a 10-1 win over Windsor.

Montgomery took control of the game with a five run fourth, which gave them a 6-0 lead.

Both Casa Grande and Montgomery have one league loss.   No. 2 Maria Carrillo and No. 3 Cardinal Newman go into the week undefeated in league play.

Monday started what should be a full week, as league play gets some momentum.

The NBL has a two game week.  The schedule is set up with the top four trying to avoid losses on Wednesday to get back into the race, before trying to make it a wild race on Friday.

All four games on Wednesday are between top four teams against the bottom four.   The only one of the four leaders that will be home is Montgomery, who hosts Ukiah.

On Friday, the two undefeated teams going into the week meet the one loss teams, with No. 3 Cardinal Newman at No. 4 Casa Grande and No. 8 Montgomery at No. 2 Maria Carrillo.

Everybody plays, but NBL Baseball.  Here are the highlights.

The two teams are a combined 21-5.    Petaluma, who got hurt by the weater the least, is one of two teams undefeated in SCL play.   The only other team is Analy as the countdown to when they meet again resumes.

Petaluma will not be in a good mood after losing four straight over the weekend in a tournament in Livermore.

The game is between two of three undefeated teams in the SCL race.   The other one is No. 6 Analy who hosts Piner.

One of the Monday make up games was No. 1 Maria Carrillo edging Rancho Cotate 5-4.  Both Rancho Cotate and Cardinal Newman have one league loss and try to stay within yelling range of the undefeated Pumas and No. 4 Windsor.

NCL I SOFTBALL…No. 3 Cloverdale at Middletown

It is Cloverdale’s second game since March 18th.    Middletown should have been ranked this week.  The only reason they weren’t is because of incomplete results.  They have won six straight and are 3-0 in league play.