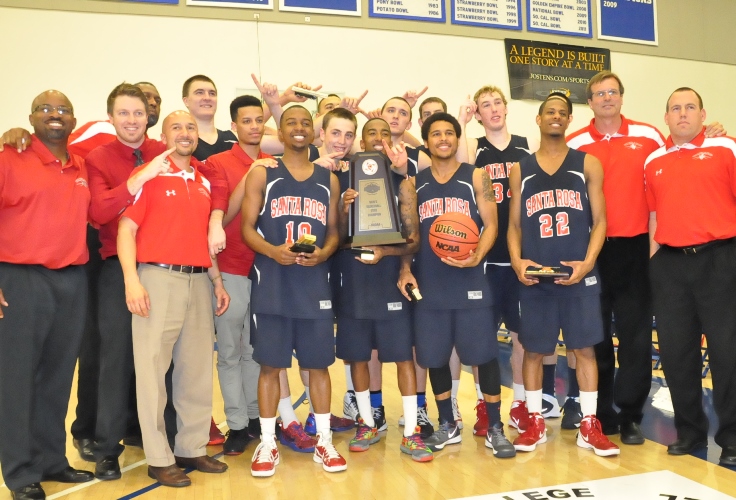 The basketball season version of the Year in Review, which included the story of the year.

November 15—Montgomery Boys and Santa Rosa Girls are ranked pre-season No. 1 basketball teams.  Both teams would end the season that way, although one would have some controversy.

December 4—In the season opener St. Vincent defeated Valley Christian 88-77 in the opening round of the Redwood Classic at Anderson Valley.  Zack Pierson scored 47 points which was the season high for the local players this season.


December 14—Willits defeats Ukiah 47-43 in the Boys REIBT Championship Game.  Two nights earlier they defeated Maria Carrillo 54-37 in the first round.  After a 2-2 start the win raised the Wolverines record to 6-2.   It also got the momentum going to a special season for Willits who wouldn’t lose again until the NCS playoffs.

January 6—The first official YSN365.com basketball ranking of the season and like the pre-season rankings nearly two months earlier, Montgomery is the No. 1 Boys team and Santa Rosa is No. 1 Girls Team.

January 7—The SRJC Men Basketball team opened its Big 8 league season defeated Modesto 72-66.   After a 3-6 start, they win their fifth straight game.  It is also the start of something special.

January 11—In one of the top games of the season, Analy rallied late to edge Piner 49-47.  It was the key game for Analy, as they went on to win another SCL Championship.


January 24—Gretchen Harrigan, who went to Casa Grande, scored an SRJC Womens record 51 points, as they defeated Diablo Valley 94-87.  It was part of a big year for Harrigan who was the state’s leading scorer, averaging 25.2 a game.   She is the first in SRJC player in history to lead the state in scoring.  In the same game her teammate at Casa Grande Stephanie Sack had a school record 15 assists.


January 27—Casa Grande defeats Montgomery 60-50 behind 24 points by Cetrick Yeaney.  It would be the Vikings only NBL loss of the season.   Later in the week Yeaney would become the fourth player in Casa Grande history to hit the 1,000 point mark in a career.

February 5—The Analy Girls wrap up the SCL Basketball championship.  They would finish league play 12-0 and it is their third championship in five seasons.    After winning two of the first three league games by two points or less, they won the rest by double figures.  Analy won the league by three games.

February 8—Analy wrapped up its fifth SCL Boys Basketball title in six years with a dramatic rally to defeat El Molino 46-42.  El Molino was close to a big upset, holding a 38-27 lead with four minutes left.

February 11—The St. Vincent Girls wrap up the NCL II championship going 14-0 in league play.   St. Vincent won the league race by three games.   It is the second time in three years that they went through the NCL II race undefeated.


February 12—Montgomery defeats Maria Carrillo 66-55 to wrap up the NBL Boys Basketball Championship.  It also was the Vikings 20th win of the season, the fourth time in five years they have reached that mark.   They won twelve of thirteen league games by double figures.

February 13—In the last NBL game of the season the Cardinal Newman Girls defeated Santa Rosa 62-53.   The two teams ended up tied for first in the NBL Girls race.  It was the second loss of the season for Santa Rosa.   The Panthers led 26-18 at the half but lost Co-NBL Player of the Year Morgan Bertsch because of a concussion late in the second quarter.  Cardinal Newman outscored Santa Rosa 13-2 the last 2:30 of the game.  Freshman Hailey Vice-Neat scored 23 of a season high 25 in the second half.

February 13—Cloverdale defeated Fort Bragg 53-35 to wrap up the NCL I Girls Basketball race.  Cloverdale would finish with a perfect 14-0 record.

February 14—Willits wraps up the NCL I Boys Basketball Championship.   The Wolverines went 25-3 on the season, which broke a school record for the most wins.  They had a twenty three game winning streak before losing their final game of the season in the second round of the NCS Division 4 playoffs.

February 14—Piner handed Analy its only SCL loss.  Keith Adams hit a three point with :06 left to give the Prospectors a 52-51 win.   The loss snapped a thirty game SCL winning streak for Analy.

February 18—The final YSN365.com basketball rankings are released and as they were at the beginning of the season the No. 1 teams are Montgomery for the Boys and Santa Rosa for the Girls.

February 20—Analy pulls away in the fourth quarter and defeats Piner 73-61 to win the SCL Boys Basketball Post Season Tournament.   Analy has won the tournament in five of the last six seasons.

February 22—Montgomery defeated Maria Carrillo 56-45 in the NBL Basketball Post Season Championship game.   Alec Raven, who was named NBL player of the year, was the game’s leading scorer with 20 points

March 5—The St. Vincent Girls defeat San Domenico 33-30 to advance to the NCS Division 5 Championship Game.  They were the only one of seven local teams to win in this round.   It is the first time in school history that they advanced to the NCS Championship game, which they lost to International of SF 51-41.

March 12—The St. Vincent Girls pulled away in the second half to defeat Ripon Christian 46-33 in the first round of the Nor Cal Division 5 playoffs.   It was the first time in school history that they hosted a Nor Cal playoff game.   The Montgomery Boys and the Cardinal Newman and Santa Rosa Girls also won on the same night.   All four teams would lose in the second round the following Saturday.

March 16—SRJC Men Basketball team wins its first ever state title defeating San Bernardino 73-67 in the championship game.  SRJC ended the season with a 13 game winning streak and with a record of 24-8.   The win was also a milestone for head coach Craig McMillan who won his 300th career game at SRJC.