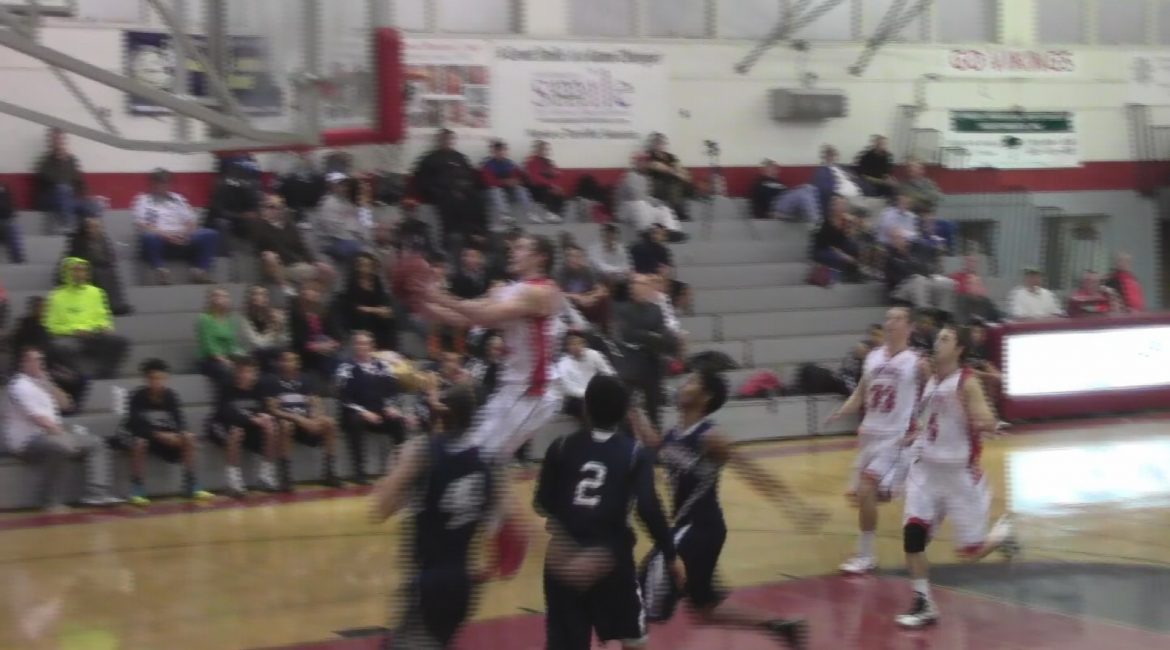 A lot of the reporting that goes on here is taken from box scores.   Sometimes, especially if I am not at a game, there just isn’t much other information to go on.  In football a box score is pretty safe haven.  A football box score includes the list of scores, so you can tell if a team had a big lead that was followed by a late rally that made it seem closer than it was or vice a versa.

A basketball box score it is a little difference.  You usually see the score by quarters and that doesn’t tell the whole story about a game, because a lot can happen during the beginning of a quarter and the end.

An example of that was the Friday Boys game when Santa Rosa traveled to Windsor, a game that I attended.    The first half was Windsor domination, mainly because of Center Sadik Sufi looking like a Man among boys, scoring 22 of his 31 points as they ran to a 36-15 halftime lead.

If you base everything just on the box score you would assume that not much happened in the second half as Windsor went on for a 64-40 win.   If I wouldn’t have been there that is what I would have assumed.

The game was totally different in the second half.  For a few moments it looked like Santa Rosa might make a dramatic comeback.   The Panthers were behind 49-40 with three minutes left and had two shots to get it closer.    Windsor then scored the last 15 points of the game to make it look like a routine second half.

That is one reason why I send out requests to get as many update as I can I game.   The other of course is so we can post on our facebook/twitter page.    The more the scores, the more you can tell what kind of game it was.   If you want to help, my email is at the bottom of this post.

There were eleven games (six boys, five girls) involving ranked teams vs. ranked teams and the lowest ranked team went 6-5.   Take away the No. 1 team and they went 6-2.

That means one of two things:

2—These rankings don’t know what they are talking about.

There are nine changes in the Top Ten for the Boys and eight for the Girls.  On the Boys side six went up, three went down and one with one of the teams moving up a new team.   For the Girls six went up and two went down with two news teams.

No. 1 Montgomery (10-4)(Last Week No. 1)…As expected two one sided wins to start league play.  The Vikings meet two ranked teams this week.

No. 5 Windsor (10-4) (10)…Dodged a bullet in league opener at Rancho Cotate. Almost like a sigh of relief, they followed that up with one of its best games of season.

No. 6 Ukiah (9-4) (5)…Followed up disappointing home loss to Cardinal Newman with a clutch last second win at Maria Carrillo.

No. 8 Piner (7-7) (9)…Probably still trying to figure out how the Analy game got away.  They can’t think about it too long with trips to Elsie Allen and Sonoma Valley coming this week.

No. 9 Elsie Allen (10-4) (NR)…More wins than any of the last three seasons.   A 2-0 start in league play and now a where we are at week with a home game against Piner, followed by a trip to Analy.

No. 10 Casa Grande (7-7) (2)…They take a big drop after tough start to league play.  As tough of the start, the schedule not to easy either.  First four games on the road including trips this week to Windsor and Ukiah.

No. 2 Windsor (11-3) (2) …Until further notice a team losing to Santa Rosa isn’t going to be punished in the rankings here.  They had two other league wins to balance out the week.

No. 4 Sonoma Valley (7-8) (10)…Biggest jump for either Boys or Girls.  The tough pre-season schedule seems to have worked out to prepare them for league play.   Win over Petaluma gives them favorite role in SCL race.

No. 6 Montgomery (7-6) (7)…Moves up one despite the loss to Santa Rosa.   This is the Girls version of Cardinal Newman after being hit by graduation.  Test of a week with Ukiah, Windsor and Cardinal Newman up next.

No. 7 St. Vincent (9-5) (9)…One of those small schools that makes you wonder how they would do in the Big School world.   Maybe undersold at this spot.  Two losses are to NCS Division 5 teams.

No. 8 Analy (6-8) (NR)…Similar to last season, off to slow start, but win over Petaluma puts them on this year’s map.  Last two league wins by a combined three points.

If Windsor can beat Casa Grande on Wednesday, that will set up a 3-0 battle at home with Montgomery on Friday.  That is if Montgomery wins their Wednesday game in Ukiah.

There are big games all over the place in the SCL Boys race.  Tuesday night Piner is at Elsie Allen and on Thursday Elsie Allen travel to Analy while Piner goes to Sonoma Valley.   Piner has one league loss; the other three teams mentioned have none.

It is a three week game for the NBL Girls.  Montgomery has home games against Ukiah and Windsor before ending the week at Cardinal Newman.

The SRJC teams, both 2-0 in league play, have a home game against Sierra on Tuesday and travels to Sacramento on Friday.   Both teams made a nice jump in the State Rankings after the two wins.

The Women have two other teams at 2-0 and one of those is the Sierra team they meet Tuesday Night.   They jumped from No. 19 to No. 12 in the state.