THROWBACK: Armijo clamps down on Petaluma for a big win

YSN 365 > News > Basketball > THROWBACK: Armijo clamps down on Petaluma for a big win 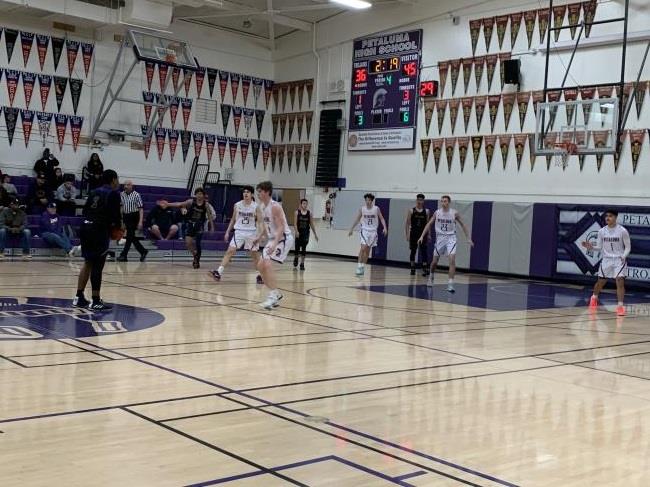 PETALUMA, Calif – Armijo-Fairfield came into Petaluma wanting to play team defense. They did just that, holding the host Trojans to just 36 points, and two in the fourth quarter in a 52-36 win Saturday night.

“Our team defense throughout the whole night is what really stepped it up for us. It was excellent holding a good team like this to 36 points,” said Armijo head coach Christian Stoll.

Petaluma’s Esteban Bermudez made a quick shot to open the scoring, but Armijo would respond emphatically. The Royals ended the quarter on a 15-1 run.

Jalen Moore and Christian Garcia would be huge components for Armijo’s run. Their defense turned into offense, with a pair of three’s from Garcia, and a few fast break layups, and a dunk from Moore had them off and running early on, and was too much for Petaluma to overcome.

“He did a great job shooting the ball tonight. He was also battling inside getting some key rebounds for us,” said Stoll.

Leading by 12 after one, Armijo kept the pressure on, with Silas Scott highlighting the Royal attack. After some weaving around Petaluma players on the court, he repeatedly was able to get to the rim and get some good looks.

Petaluma was able to get some offense going. Ryan Sullivan was able to drop in five points, including a three, and nearing the end of the half, Ryan Giacomini hit a three from the corner to inch the Trojans closer, but still trailed 25-15 at the half.

Things began to get very interesting in the third quarter. Petaluma suddenly got hot from beyond the arc. Bermudez hit a couple three’s to help pull the Trojans to within five. After Armijo extended its lead, aided by Dominic Chavez and K’Maurier Jenkins hitting a few three’s, Ivan Cortes was able to knock down a shot, then Sullivan was able to get to the rim for a layup and-one, hitting the free throw. Then, after an Armijo miss, Liam Gotschall hit a three to cut it to just a three point deficit after three quarters of play.

Moore and Jenkins began to take over on both ends of the floor in the fourth quarter, with their stifling defense leading to transition buckets. They both were able to get in an alley-oop layup on designed plays, something they had tried to do a couple times already but were unsuccessful.

Petaluma was held to just two points in the final stanza, provided by Gotschall on a putback layup. The Trojans missed all four free throws attempted in the fourth quarter

Moore finished with 15 points tonight for Armijo, with Jenkins dropping in 14 points with him.

Bermudez, Giacomini, and Sullivan each had eight points for Petaluma.

Armijo (6-9) continues non league play with a game at Concord on Monday night.