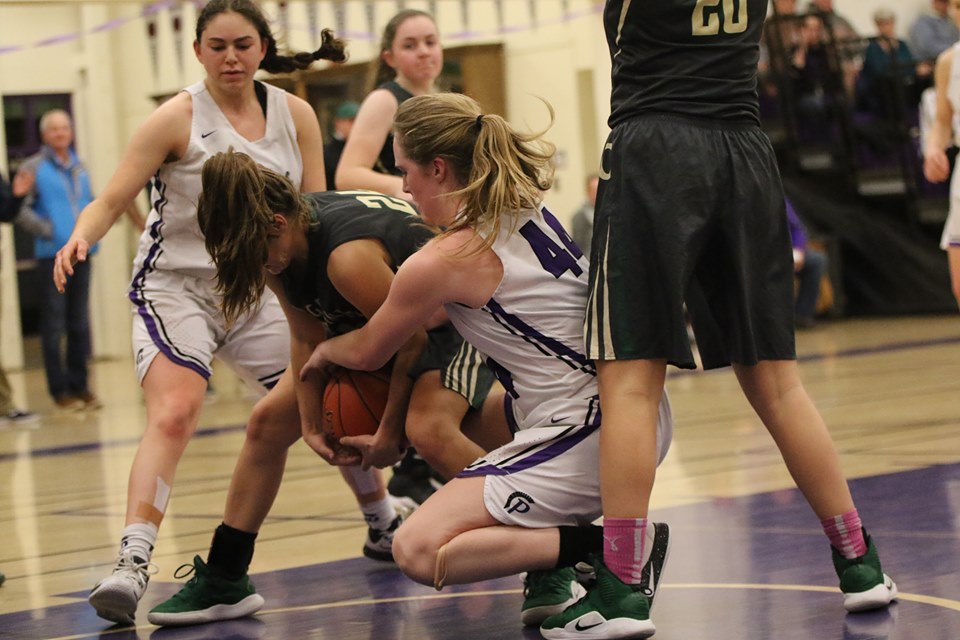 Due to COVID-19 our sports committee decided to not select players to make up all league teams as they usually would. We reached out to coaches and they nominated players and most coaches also wrote messages about each player. All coaches were emailed and those who did respond by the deadline set were able to get their athletes recognition.

First Team:
Lexi Hunt – Sophomore
From Coach Paul: “Lexi is a multi-sport athlete and was juggling three sports (volleyball, basketball and track) during this shortened covid-19 spring season. Her stats reflect her appearing in 8 of the 10 games we played and if we had the opportunity to choose an MVP she would be it.”

Katrina Gorauskas Skas – Junior
From Coach Paul: “Besides her offensive contributions, Katrina was one of our defensive standouts causing most players to think twice before entering the paint for a shot.”

Second Team:
Leyna Gorauskas – Freshman
From Coach Paul: “Leyna was very impressive for an incoming freshmen and would get a hustle award from anyone who coached her. She has a non-stop motor and will be a big part of the Lady Pumas Basketball program for the next three years.”

Oli Parlato – Junior
From Coach Paul: “We feel Oli is deserving of this because she is an outstanding defender and makes great plays when they’re needed.”

First Team:
Grace Boyle- Junior
From Passalacqua: MVP: she was our point guard and had an outstanding year. She averaged 13.3 points per game. Came up big in our last game v Analy with 20 points, helping us to go 2-0 against them and finished 5-1 in league play, just above Monty who was 4-1 I believe. Grace really elevated her play this year and became a strong outside shooter, and truly was the quiet leader of our team.

Meredith Gilbertson – Junior
From Coach Passalacqua: “ She played center but is more of a power forward. She average 12.2 points per game and 10.2 rebounds per game. She had an outstanding season and was returning all-league player.”

Second Team:
Maddie West – Junior
From Coach Passalacqua: “Also had a very nice year on both offense and defense. She sat out her sophomore season rehabilitating a separated shoulder that she had surgery on in 2020. She averaged 8.5 points per game and was a key piece to our strong season.”

First Team:
Sarah Tait – Senior
From Coach Anderson: “Ms. Tait would be a 4th year starting varsity basketball player for Piner High School this upcoming school year. She is a two-time 1st team all-league player (last year, her junior year there were no all-league awards due to COVID or else she would’ve gotten another all-league nod), and she was the girls Press Democrat Athlete of the Year recipient for Piner High School her sophomore year. Ms. Tait is a position-less player, she plays wherever the team needs her, if I had to designate her to one position, it would be “guard”. Sarah averaged 23 points a game, 10 rebounds, and 5 assists a game last season. Ms. Tait broke the all-time Piner Girls scoring record (in her junior year) and sits at 1,039 points in her career, the next highest points scored for Piner is at 875 points. Next personal challenge which she is taking head on is breaking the all-time Piner scoring record for boys/girls which would be held by Luke Devenny at 1651 points, Ms. Tait is 612 points away; team challenge Sarah has reiterated to me multiple times- she wants to win a league title for the school and girl program.”

First Team:
Lexi Rosenbrand
From Coach Bettencourt: “4.5 ppg, 5.4 Reb/Game. Was our best player consistently throughout the season and the leader of our team. She was an incredible team defender and led the team in overall rebounds. We are nowhere near the team we were this past season without her consistent play and leadership. Much more than stats can show.”

Second Team:
Charmaine Griffin
From Coach Bettencourt: “7.4 ppg, 3.3 Rebounds/Game. Charmaine led us in scoring and was a major factor in some of our biggest wins, including scoring 22 in our win over American Canyon. She also had double digit games in wins over Healdsburg (16) and Sonoma (11). Her defensive intensity and effort are incredible. Also led the team in 3-pointers made.”

Sofia Tinnon
From Coach Willis: “Sofia Tinnon participated in both Track and Basketball this year at the same time due the shift in sports seasons this year. Tinnon was our go-to offensive player whenever we needed a basket. When Tinnon got going downhill it was incredibly hard to stop her and teams were constantly having to double and triple team her in the paint and she still found ways to score. Tinnon ended the season tied for 3rd in the Vine Valley League in scoring with 11.2 points per game. She had a total of 145 points on the year while playing in 13 out of 15 games this season and shooting 43% from the field. She also averaged 6.7 rebounds, 0.8 assists, 1.4 steals and 0.5 blocks per game to go along with two double-doubles this season.”

Second Team:
Maizy Armstrong-Brown
From Coach Willis: “Maizy had a very solid all around year for us, she was second on our team in scoring with 7.2 points per game, fourth in rebounds as PG with 4.3 rebounds per game, and second on the team in blocks with a total of 10. She led the team in both assists and steals with 2.4 and 3.3 respectively, which placed her fifth in the league for assists and second for steals. Maizy also played the high pressuring top position of our zone which required her to always be quick on her feet guarding the opposing team’s point guard.”

First Team:
Lizzie Qui – Sophomore
From Coach Donohoe: “Lizzie filled up the stat sheet every night, averaging 10.9 points per game, 5.9 rebounds per game, 3.9 assists per game and 2.4 steals, she had a very solid Sophomore year.”

Kate Kerr – Junior
From Coach Donohoe: “ Kate was a scoring threat from all 3 levels averaging 9.3 points per game, 9.6 rebounds per game (4.0 offensive rebounds) and 2.4 steals per game. She made big strides offensively her Junior year.”

Second Team:
Livia Hedberg – Junior
From Coach Donohoe: “Liv was out her Sophomore year with an injury, she worked very hard to get back into the rotation, she really came on the 2nd half of the season, averaging 7.7 points per game, 4.8 rebounds per game, and 2 steals per game.”

First Team:
Rose Nevin – Senior
From Coach Bihn: “Rose averaged about 13 rebounds per game this season and received 200 of our 479 rebounds total. Rose was our highest rebounder for the past 2 years and highest rebounder of the 2020-2021 season.”

Mallory O’Keefe – Junior
From Coach Bihn: “Mallory averaged 12 points per game this season and was our only point guard to bring the ball up the court. We really relied on her when it came to being pressed and starting our offense. If Mallory had played softball this year we would have struggled as a team when controlling the game”

Second Team:
Taylor Iacopi – Senior
From Coach Bihn: “Taylor shot lights out on her senior night scoring 25 points which was her game high! She brought intensity on defense and always communicated with her teammates as a senior leader.”

First Team:
Jazmine Fontillia – Sophomore
From Coach Davis: “Point guard for team. Great at reading the floor and making getting the ball to the right person at the right time. Makes her teammates better. Leading scorer for our program and the league this season. For the season she average 14.1p/g(1st in league), 6.3 rebounds, 4.4 assists and 2.3 steals.”

Trinity Billingsley – Junior
From Coach Davis: “Plays point guard and shooting guard for us. Explosive player who can get to the basket at will and has also become an outside threat by improving her midrange shooting. For the season she average 10.7 p/g(6th in league), 6.8 rebounds(6ht in league), 4.2 assists and 2.5 steals.”

Second Team:
Destiny Evans – Junior
From Coach Davis: “Plays forward/center for us. Was the most improved player for us this season. Out of the 12 games played she had a double double in 6. Gave us a physical presence inside and increased our second chance opportunities with her rebounding ability. For the season she average 11.2 p/g(3rd in the league), 12.6 rebounds (1st in league) and 1.8 blocks.”

Amaree Bennett – Senior
From Coach Davis: “Plays shooting guard for us. Loves the game of basketball and puts in an enormous amount of work to be great at the game. Stretched the floor for us this season with her 3pt shooting. For the season she averaged 8.3 p/g(10th in league), 3.3 rebounds and 1.8 steals.”