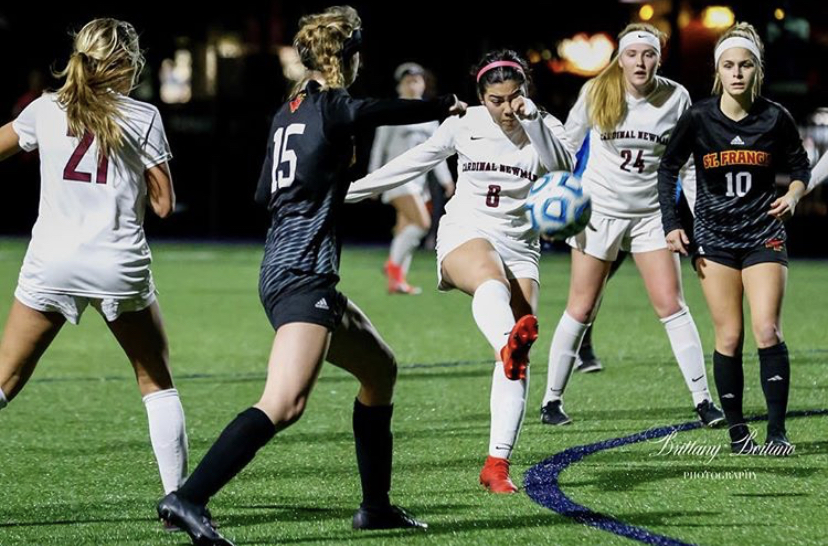 Winston Churchill once said, “Success is not final, failure is not fatal: it is the courage to continue that counts.” Elizabeth Tosti, known by her family and friends at home and around campus as “Biffy”, is filled with that courage Churchill was talking about.

Tosti grew up in Long Beach, California before moving to Sonoma County and attending St. Rose. She played sports like volleyball, soccer and even played baseball with the boys, but soccer always stuck. The Santa Rosa United stud made the varsity soccer team her freshman year and was flying high with the Cardinals until it happened. “I was playing a game (at Newman) and hit a pot hole,” Tosti recalled. “I overextended my left knee and heard a pop.” She knew immediately that it wasn’t good, having to be carried off the field by her Dad and coaches. Tosti had torn her left ACL, and for a split second, the then 14-year-old thought her soccer career might have been over.

An ACL injury is a tear or sprain of the anterior cruciate ligament (ACL) — one of the major ligaments in your knee. ACL injuries most commonly occur during sports that involve sudden stops or changes in direction, jumping and landing. Most, if not all, require some sort of surgery and the recovery process can range anywhere from eight to sixteen months.

The injury would sideline her for the remaining half of her freshman season and the rehab process would take up her sophomore year as well. She had never been seriously injured like this before and had no idea the type of journey she was about to embark on. Her surgeon recommended taking things nice and slow, citing studies that showed the risk of reinjury drastically decreasing with a longer rehab process. After surgery, she elected to take things slowly, traveling to USC where her running gait was studied. “The biggest challenge was cutting,” Tosti explained. “It was exciting to run again but cutting was scary and challenging. You basically have to learn how to balance, walk, run and kick a ball again.”

After a year of rehabilitation, she returned to live action playing with Santa Rosa United. That’s when it happened again. This time her right leg. “I got taken out,” Tosti remembered. “I thought to myself, are you kidding me? I was just in disbelief it happened again.” If there was any silver lining to tearing another ACL, it was found knowing that she had come back from the injury once before. “I waited a little bit longer to start the rehab process to weigh on the safer side,” Tosti said. “I went to Dr. Powers at USC and tested my running again.”

A cornucopia of cataclysmic events hit all at once. Her family home burned in the October 2017 wildfires. Tosti’s junior year consisted of rehabbing in Fremont twice a week and a total of 12 moves as the family continued to temporarily relocate. Not even that could stop her. She managed to keep up her work in the classroom despite the uphill battle she faced on a daily

basis, “I’m not the type of person to slack just because something like that happens to me.” Tosti noted.

A tough junior year paved the way for what would become a sweet senior send off. Tosti remembers what it felt like to first return to the field, “It felt pretty amazing since I hadn’t finished a season with my team. High school soccer is special,” Tosti stated. “Everyone truly cares about each other and they aren’t just playing for themselves. Playing for them and myself was amazing.” Tosti would score a hat trick in the first round of the NCS playoffs and registered another goal in each of the next two playoff games.

While she hasn’t decided if she wants to play in college, her dream spot would be in Boulder, Colorado. The future business major has already been accepted to Oregon and is waiting to hear back from Boulder and Cal Poly. If soccer isn’t in the plans, she would consider a career in either marketing, commercial real estate or another entrepreneurial path.

Tosti knows there are lessons that other athletes, both younger and older, can take away from her journey, “In the moment it’s awful. Your heart literally breaks. But you just have to think about how much you love the sport and how much you’re willing to sacrifice for it,” Tosti said. “It really is a hard process on you mentally and physically, but it’s a good time of reflection to think about what you’re doing it for.”