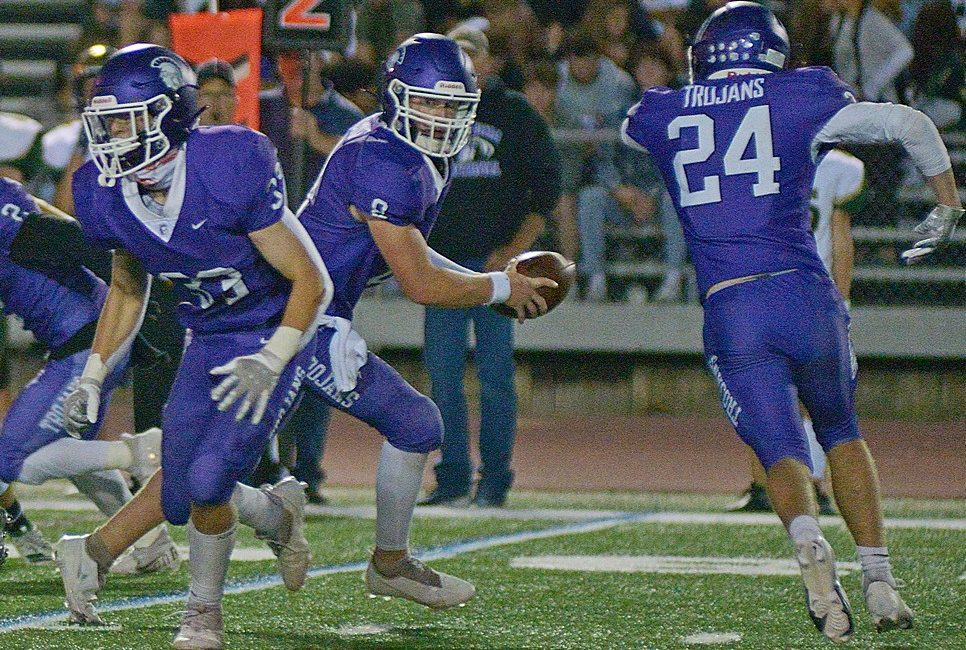 On Friday, the #4 Vintage Crushers (1-3, 0-1 VVAL) traveled to Petaluma to take on the #5 Casa Grande Gauchos (3-1, 1-0 VVAL) in a high scoring game with the Gauchos coming out on top,  48-46. The Gauchos were led by their senior quarterback Jacob Porteous who in four games, has accumulated 1364 yards and 17 touchdowns. Against the Crushers, he threw for 269 yards on 26 completions and three touchdowns. The Gauchos defensively were led by senior linebackers Joe Ellis and Antonio Bernardini. They had a combined total of 27 tackles in the win. For Vintage, most of their offense came on the ground as they rushed for a total of 346 yards and five touchdowns. Leading the Crushers in rushing was senior quarterback Tytan Bradley who finished the game with 123 yards and 3 touchdowns. Also helping him in the backfield was senior running back Dylan Smith who added another 97 yards and a touchdown for the Crushers. Their ground game was not quite enough as the Gauchos squeaked out the win handing the Crushers their first ever VVAL loss, snapping an 18-game league winning streak.

Also in the Vine Valley Athletic League, the Justin-Siena Braves (2-3, 0-1 VVAL) hosted the Petaluma Trojans (5-0, 1-0 VVAL). An exciting back and forth match that ended in a three point win for the Trojans as sophomore kicker Asher Levy nailed a game winning field goal as time expired. Petaluma got contributions from junior quarterback Henry Ellis who threw for two touchdowns and was 6-11 for 120 yards. Lucas Vanderlind rushed for 63 yards on nine carries.

The #7 St. Vincent Mustangs (5-0, 0-0 NBL-Redwood) defeated host Ukiah (1-4, 0-0 NCS-Oak) in a defensive battle that ended in a 15-8 win for the Mustangs. The Mustang offense struggled but got a big contribution from junior running back Kai Hall rushing for 94 yards on 25 carries as well as converting a two-point conversion. Senior linebacker Jake DeCarli led the St. Vincent defense with nine tackles, two sacks and an interception returned for a touchdown. Sophomore defensive back Nico Antonini had eight tackles, junior linebacker Nathan Rooks with seven and senior defensive end Killian Collins with six, including a pair of sacks.

#1 Windsor (4-0, 0-0 NBL-Oak) also kept up their winning ways defeating Eureka 41-6 Saturday. Senior quarterback Chase Vehmeyer was 13-15 for 194 yards in the air, however the Jaguars scored all of their touchdowns on the ground. Their 227 yards rushing was spread around six players with three all reaching the end zone. Senior running back Damian Escarcega scored three times, senior Makhi Johnson twice and sophomore Rickey Campos once.

Montgomery’s Mason Hallin is making noise this week as he is tied for third in the nation in interceptions with 7. There are three tied for second with eight interceptions. The player with the most interceptions in the country is Connor Ladd of Smith-Cotton High School (Sedalia, MO) with 11.