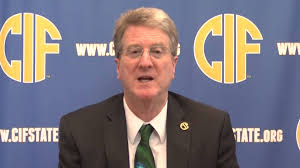 Blake to Step Down at Conclusion of 2018-19 School Year

SACRAMENTO, CALIF. – Roger Blake, the CIF Executive Director since 2012, has informed the CIF
Executive Committee his intent to retire at the end of the 2018-2019 school year.

“It has been an honor and privilege to serve CIF, our schools and students for the past two decades,” 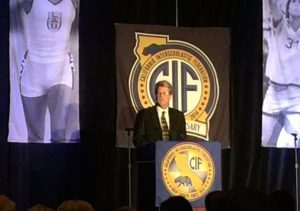 stated Blake. “When I joined the CIF staff, I could not have imagined a more challenging and satisfying
journey and to finish my educational career as the CIF Executive Director has been extremely rewarding.”

Blake, who turns 65 this month, will conclude a 43-year career in secondary education including the final
21 years with the CIF. During the past two decades, Blake held leadership positions within the CIF as
Director of Education & Training (1998-2001), Assistant Executive Director (2001-07) and Associate
Executive Director (2007-2012) prior to being selected as the Executive Director. A 1976 graduate from
California State University, Fullerton he began his teaching and coaching career at Sonora High School
(Fullerton – 1976-77) and Cajon High School (San Bernardino – 1977-78). Next, Blake spent 24 years in
the Lake Elsinore Unified School District as a teacher, coach, and administrator prior to joining the CIF
State Office staff.

Since assuming duties with the CIF, Blake has vigorously promoted the values of education-based athletic
and activity programs and has helped expand opportunities for boys and girls statewide. Blake has been a
leading voice and recognized within the State Capitol and the Legislature during his tenure testifying and
advocating on behalf of education-based athletics and activities. For more than two decades Blake has led
the organization’s focus on risk minimization in sports with an emphasis on education and training of
coaches and rules modifications. In 2013, the CIF entered into a partnership with California Special
Olympics and the U.S.A. Paralympic Committee to expand and increase opportunities for students with
disabilities that now includes participation in State Championship competitions.

“It is a credit to the leadership in California high schools and school districts that I have been able to
witness and be a part of the significant growth in education-based athletics over the years,” Blake stated
when asked about the growth in high school sports. “In 1998, the CIF had 1,144-member high schools and
584,590 participating student-athletes compared to the 2018 census that listed 1,606-member schools and
more than 831,000 male and female participants, a phenomenal growth of 42%.”

“We want to thank Roger for his dedication and service to education-based athletics and the studentathletes of California over the years,” stated CIF President James Perry. “For last two decades, Roger has
guided the CIF through new challenges with foresight and integrity. The CIF has been very fortunate to
have such an enthusiastic and persistent leader and we will miss him at the helm. We wish him the best of
life in retirement.”

The CIF Executive Committee will begin the search for the new candidate immediately with an application
deadline of March 29, 2019. It is anticipated that a new CIF Executive Director will be announced in May
2019.
–