Clash of the Cats 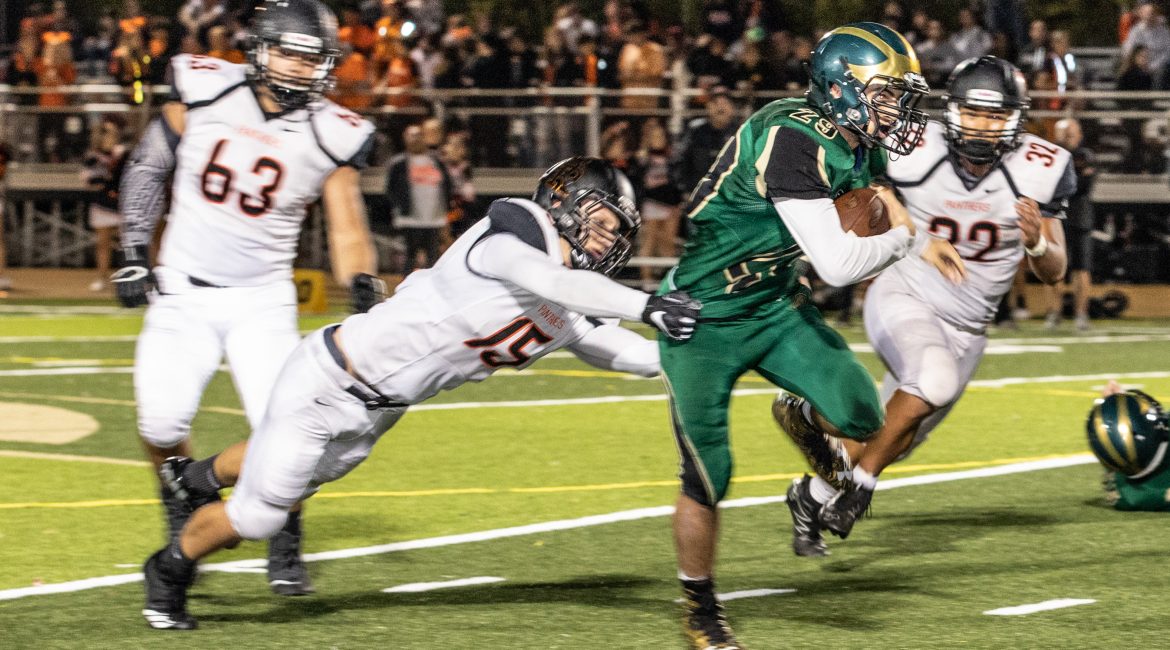 There was a clash of the cats on Friday night as Santa Rosa traveled across town to take on Maria Carrillo.

Maria Carrillo took the opening kickoff to their own 41-yard line before fumbling the ball back to Santa Rosa. A quick 5 play scoring drive was capped off by a 23-yard touchdown run from Chandler Andrew (Sr.). Santa Rosa would convert the 2 point after attempt and jump out to a quick 8-0 lead less than 2 minutes into the game. After another fumble, Carril

lo’s defense held strong forcing the Panthers to punt. Maria Carrillo head coach Jay Higgins was not concerned about the early turnovers, “It’s unfortunate, no one likes turnovers. They were kind of fluke plays and both were the result of extra effort on account of our guys. But it didn’t distract the team from reasserting themselves.” The Pumas would march down the field and end the first quarter still down 8-0, but knocking on the Panthers goal line.

Carrillo quarterback KC Kelly (Sr.) started the second quarter with a sneak and score, however, a failed 2-point conversion would keep the Panthers ahead 8-6 with 11:56 remaining in the half. Santa Rosa would then embark on a 15 play, 80-yard scoring drive that featured runs from both Andrew and Jayvee Long (Sr.) before culminating with a 10-yard touchdown run from Long. The Panthers would convert another 2-point attempt and would lead 16-6 with 5:15 left. The Pumas would respond quickly, within 2 minutes Tyler Van Arden (Sr.) would power his way into the end zone for a score and convert 2 point after attempt of his own. Santa Rosa held onto a slim lead with 3:34 remaining in the half, and after a quick three and out, the Pumas would get the ball back with 2 minutes left in the quarter. Kelly would connect with receiver Logan Kraut (So.) for a 45-yard touchdown strike, giving Carrillo a 21-16 lead going into halftime.

The start of the second half saw the Panthers stringing together a strong 8 play drive, but the Panthers would fumble. Carrillo would capitalize as Kelly would toss a 25-yard touchdown pass to Mason Adams (Sr.) with 5:59 remaining in the third. Santa Rosa would strike back fast with Long on a 48-yard run that set the table for Andrew’s 22-yard touchdown scamper, his second of the night. Carrillo would march down the field and appear to have scored with 52 seconds remaining in the third, until officials gathered and overturned the call, ruling a touchback saying Van Arden had fumbled the ball into the end zone.

Fourth quarter action began with a Santa Rosa drive that would eventually result in a punt. Carrillo would go on an 8-play scoring drive that concluded with Van Arden’s second touchdown of the night. With 6 minutes left in the game and down by 12, Santa Rosa went to air the ball out but Carrillo’s Jackson Petty (Sr.) tipped and picked a pass at the line of scrimmage and returned it nearly 40 yards for the score. Carrillo lead 41-22 with 5:41 left in the game and would pick off another pass on the following drive, leading to a 5-yard touchdown run from Jack Sherman (So.).

Santa Rosa head coach Russell Ponce spoke on what needs to be addressed before starting league play, “In the second half, we didn’t execute our fundamentals. The good news is that they are easy fixes. We have to get back to the basics. We are together six days a week and we have to get better every day, we can’t waste a single day.”

Santa Rosa (3-2) will have some extra time to work on fundamentals during their bye week and Maria Carrillo (3-1) will head to Montgomery next Friday.