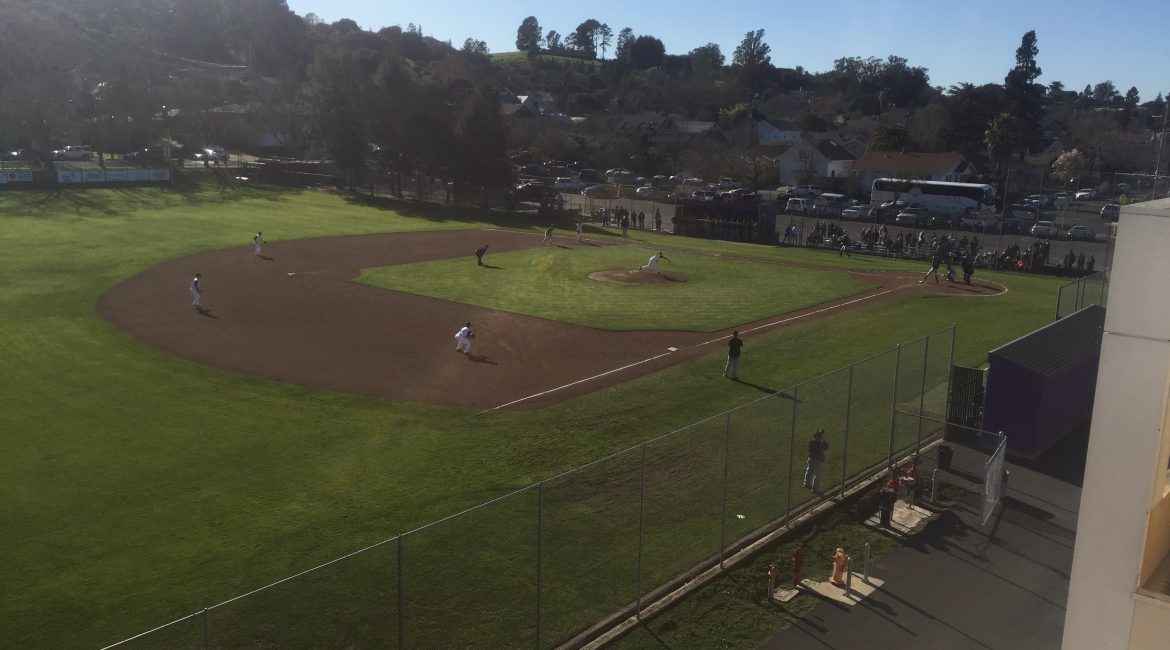 Doyle Park played host to a NCS Division 5 match up between the Sonoma Academy Coyotes and Fremont Christian Warriors.

In the top of the first inning, Sonoma Academy’s starting pitcher John Salmonsen (Sr.) would struggle to find a rhythm allowing two RBI singles and a sac fly which would give the Warriors a quick 3-0 lead. The

Coyotes would then run themselves out of the bottom of the inning with the first out coming in a run down and the last on a steal attempt.

The second inning wasn’t much nicer to Salmonsen as he would walk a batter, hit another and allow two more runs to cross the plate. The Coyotes would go three up three down in the bottom frame.

In the third inning a walk quickly turned into two stolen bases and Sonoma Academy was left trying to fend off another score. A sac fly would bring the runner home and Fremont Christian would take a 6-0 lead into the bottom of the third. Colin Dewees (So.) would draw a walk, take second on a passed ball and move to third after a botched pick-off attempt. Nathan Huber (Fr.) would knock in Dewees with an RBI triple and Gabe Gelsman (So.) would bring in another runner with a sac fly a few batters later. After three innings, Fremont Christian led 6-2.

The top of the fourth saw Byron Spars (Sr.) come in for relief duty, ending Salmonsen’s night with 3 IP, 2 BB and 4 ER. The top half was relatively quiet until Ben Vogel (Sr.) tracked a deep shot to center field, making a spectacular diving catch and immediately bouncing right back up to get the tagging runner at second for an inning-ending double play. The Coyotes would proceed to have a second three up three down inning in the bottom half.

The fifth inning is where things started to get away from Sonoma Academy, Aaron Knuth (Fr.) would get two quick outs but ultimately give up two runs and leave the bases loaded before being replaced by Ben Weaver (Fr.). Weaver would hit back-to-back batters before getting a strikeout to end the inning. After a third three up three down inning for the Coyotes, Fremont Christian led 9-2 after five.

Chance Colbert (Sr.) would take the mound for the top of the sixth and only allow one run to cross, down 10-2, Sonoma Academy was starting to feel the pressure going into the bottom frame. New pitcher Bubba Gomez would allow one run for the Coyotes who now trailed 10-3 after six.

Nathan Becker (Sr.) would come out to finish the game and after loading the bases with two walks and an infield single, would record three consecutive strikeouts to end the inning. The Coyotes were unable to get anything going in the bottom of the seventh with their fourth three up three down of the game.