Dylan Smith leads Vintage to a rout of Casa Grande 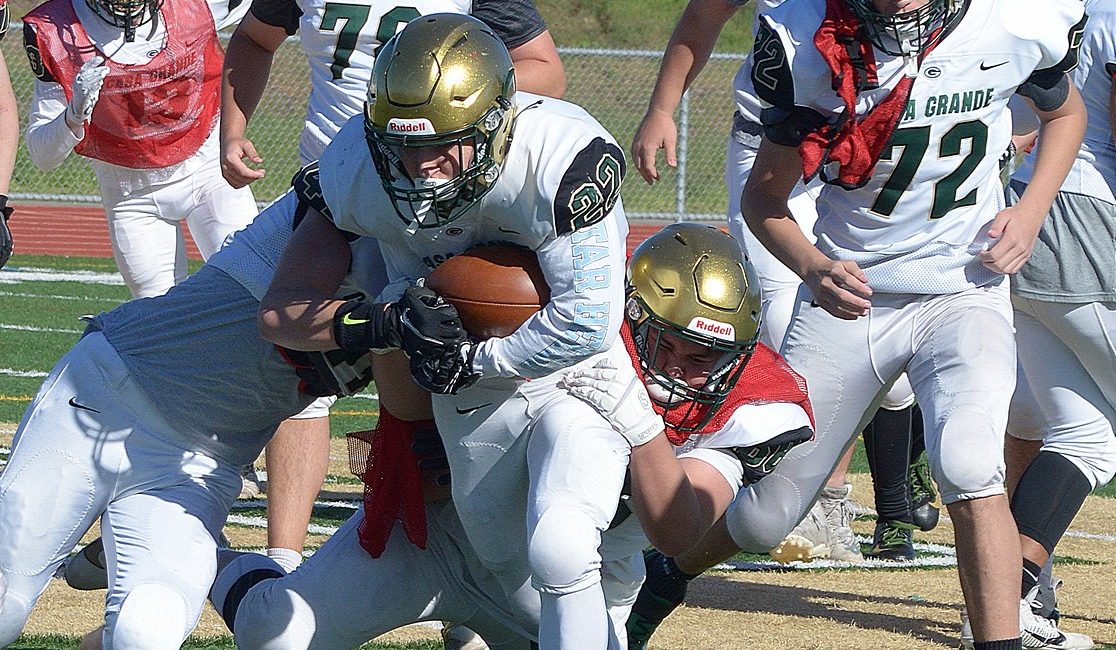 With the first action of league play, and the first sign of football in the Vine Valley Athletic League since 2019, the Vintage Crushers came out ready to play in a 53-6 win over host Casa Grande Friday night 53-6.

The game started just as Vintage would have wanted it to when senior kick returner and wide receiver Reid McCaffery took the kickoff to Casa Grande’s 19-yard line. The big return would soon lead to a four yard touchdown run by star Vintage Junior Running Back Dylan Smith to go up 6-0.

Vintage wasn’t going to let up. On the next drive Vintage forced a three and out with the help of a two yard tackle-for-loss by Senior Linebacker Edger Navarro. On the offensive side, Smith was just getting it going. The next possession, he took the ball 45 yards for a touchdown. A failed two point conversion made the score 12-0. Casa Grande struggled to create any offensive momentum and had to punt again.

Smith was ready to go back to work. On the first play of the possession, he ran for a 42-yard touchdown and a successful two point conversion made the score 20-0.

At the end of the first quarter, both Casa Grande and Vintage forced fumbles. Casa Grande’s sideline was ecstatic as junior lineman Esteban Sierra made their first big play of the game and it appeared they had some momentum going in the right direction.

The Vintage Crushes had just as much dominance in the second quarter as they did in the first, starting it off with a 31-yard touchdown run to go up  27-0.

Vintage then got the ball back and in two big plays from senior tight end Nick Schuttish including a 38-yard reception and a 35-yard touchdown run, Vintage was not looking back anymore.

Senior wide receiver Logan Nothmann started off the drive with a 53-yard reception and Smith topped it off with a 22-yard touchdown catch. With a successful point after touchdown, the Crushers took a demanding 40-0 lead going into halftime.

Casa Grande’s first drive of the half looked promising as they were able to string together some plays including a big reception on second down and a fourth down conversion but had to eventually punt. On the next series, the Crushers forced three straight plays for a loss of yards including a four yard sack and then an incompletion, as Vintage got the ball back on a turnover-on-downs.

Vintage was able to get all the way down to the Casa Grande nine yard line with the help of a 44 yard run from junior running back Mosaati Schaumkel but they fumbled the ball and Casa Grande took over.

To start off the fourth, the Gauchos would have to punt it away, but they botched the punt and it ended up in a turnover-on-downs. Vintage took over on Casa’s 31-yard line and in one play and a 31-yard reception that resulted in a touchdown to push the score to 46-0.

Vintage would then get the ball back and string together some run plays which would result in a two-yard touchdown run. Sophomore kicker Jacob Segura-Delgado’s extra point was good making it 53-0 in favor of Vintage.

Vintage Head Coach Dylan Leach commented on it after the game saying, “Jacob is more than a backup kicker to us,” Leach stated. “We just adore him and everyone wants what is best for him and for him to get that opportunity, we couldn’t just be more proud.”

In the final minutes, Casa Grande would get two big plays that included a 34-yard pass and a 12 yard run that would lead to a 29 yard touchdown pass to Junior Wide Receiver Shane Runyeon as time expired.

“We are young, we are really young, juniors and so that’s where we want to be, we know our tackling looks like; we haven’t tackled since 2019,” Antonio said. “We’ve been doing what we’ve supposed to be doing, not running football drills and stuff.”

For Vintage, Senior Lineman Connor Smith when asked about how it feels to be back on the field, he said, “We’ve been waiting so long, it’s been 10 months and this day could not have come sooner, we were losing hope but this day really brought our spirits up.”

Dylan Smith was the star of the show for Vintage totaling for 198 yards and four touchdowns.

At the junior varsity level, Casa Grande was able to defeat the Crushers 28-14

Petaluma lost to Justin-Siena, in a defensive battle, 7-0