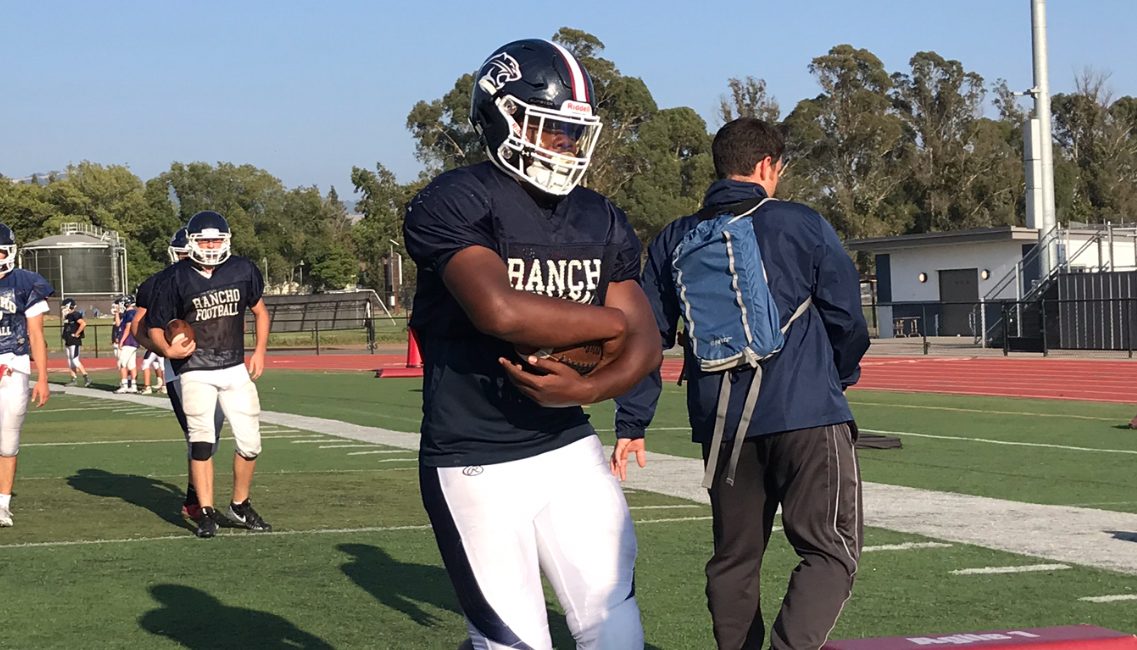 As we previously reported last October, the North Coast Section voted to move around some leagues here in the North Bay. The Sonoma County League is no more and the North Bay League now has two divisions; “The Oak” Division and “The Redwood” Division. New alignment means new expectations, here’s what you can look for from the new North Bay League.

The Tigers are one of those schools that are making the jump from the SCL to the NBL and look to prove themselves with a strong first impression. A successful 2017 campaign saw the Tigers finish 6-4 overall going undefeated in league to claim what was to be the final SCL title. Head Coach James Foster is optimistic about the upcoming season, “I’m excited for the season to come. It comes with new challenges with the shifting of the leagues. We played Maria Carrillo, Cardinal Newman and Rancho Cotate last season during our non-league schedule. Playing those teams this year in league will be fun.”

The high scoring offense that averaged just under 35 points a game last year will be led by quarterback Nic Visser (Sr.) who was voted to the first team all-league selection as a wide receiver last year. Visser will be looking to connect with wide receiver Tyler Nebozuk (Sr.) to maintain and build upon that high scoring threat. The defense has 6 returning starters with include linebacker Anthony Lepori (Sr.). Lepori will be an important factor for a more experienced defense that surrendered around 28 points a game last year.

The Cardinals are a perennial threat in the NBL, proving so by going undefeated in league last year finishing 10-3 overall. When asked about the upcoming season, Head Coach Paul Cronin said, “We have a really good team this year with a lot of experience.”

He’s not kidding either, experience is something they have a great deal of. The team will be led on both sides of the ball by 4-year starter Dino Kahaelelio (Sr.) along with Chauncey Leberthon (Sr.) and Porter Tett (Sr.), who return for their 3rd year of varsity ball. An offense that averaged 47 points in 2017 will be accentuated by Jackson Pavitt (Jr.) and Jake Woods (Sr.). The 2017 defense gave up 25 points a game will be bolstered by returning starters Nick Wall (Sr.), Julio Angel (Sr.), Noah Stevenson (Sr.) and Dylan Farrar (Sr.).

Cronin also mentioned how excited he is to have newcomers Giancarlo Woods (Jr.) and Shane Moran (So.) on the team this year. Quite simply, the Cardinals could be a problem for other schools in the NBL during 2018.

If there is one team that could slow down the Cardinals quest to go back to back, it is Rancho. Last year the Cougars finished second in league going 10-2 overall. The offense that put up 45 points a game lost 9 seniors, but that doesn’t look like it will slow them down in 2018. Head Coach Gehrig Hotaling feels good about their chances, “Quarterback Jared Stocker (Jr.) is ahead of schedule and could have a break out year. Rasheed Rankin (Jr.) and Connor Barbato (Sr.) should keep the offense going until we really get in a rhythm. We will be underdogs in almost every game this year and we enjoy that role.”

If they are in fact underdogs, it won’t be because of their defense. The defense that only surrendered 17 points a game in 2017 has a very talented and proven defensive front seven returning. The standout is linebacker Elias Rantissi (Sr.), who has an offer from San Jose State on the table. Rantissi will be accompanied by seniors James Parker, Trevor Lee and Eric Hupp who are looking to wreak havoc on opposing offenses all year long. This is a team playing with purpose and inspiration thanks to Trevor Barella, the team’s hydration technician.

New Head Coach Brad Stibi has his work cut out for him in 2018. Last year Windsor finished tied for 4th in the NBL going 5-6 overall. The offense will have to improve upon its 21 points a game during 2017 while the defense will have to keep opponents from averaging 27 points if they want to make this a season to remember. A tough non-league schedule that includes Casa Grande, Freedom and a trip to Del Oro will have the Jaguars ready for the Oak Division. An interesting league match ups to look out for will be when they take on Cardinal Newman at home on October 12th and when they travel to Maria Carrillo on October 26th.

2017 didn’t go exactly as planned for Carrillo. The Pumas finished tied for 4th in league going 4-6 overall. The offense averaged a solid 27 points a game, but the defense gave up 35 on average in the process. A non-league schedule against Redwood, Benicia and Casa Grande should have the Pumas primed for league play. League games to look out for include a tough end of season stretch against Rancho Cotate on October 12th, at Cardinal Newman on October 19th and when they host Windsor on October 26th. 3 Star Divison 1 prospect Tyler Van Arden (Sr.) will lead the Pumas through it all in 2018.

Jonathon Dewey is looking to build on 2017’s success. Ukiah finished 3rd in league going 6-5 overall. The offense averaged 27 points a game, but the defense will need to improve upon letting opposing offenses average 30. A tough non-league schedule includes Willits, Eureka, Redwood and Fremont. If the Wildcats can claw their way through those schools, there’s no reason as to why they couldn’t hold their own in league. NBL games to look out for include hosting Cardinal Newman on October 5th and when they travel to Rancho on October 26th.

The Lions join Analy in making the SCL to NBL jump. Head Coach Randy Parmeter is tasked with building upon last year’s 4-6 overall record that resulted in a 5th place league finish. El Molino’s offense averaged just under 24 points a game while their defense let opposing schools average 27 in 2017. We will find out just how serious of a contender the Lions will be after a non-league schedule that includes St. Bernard’s, Sonoma Valley, Lower Lake and Petaluma. League games to look out for include Santa Rosa on September 28th, Piner on October 5th and a trip to Montgomery on October 19th.

Elsie Allen returns to the NBL after a brief hiatus. The Lobos look to put an abysmal 2017 campaign that saw them going 1-7 overall and finishing last in league behind them. The offense managed to scratch across 18 points a game, but the defense was where most of the issues lied as they surrendered around 40 points a game. A long non-league schedule that includes Cloverdale, Hoopa Valley, St. Vincent’s, McKinleyville and Vacaville Christian will have the Lobos ready for league as they begin rebuilding the program. League games to pay attention to are against Healdsburg on October 5th and Piner on October 19th.

The Greyhounds have their work cut out for them in 2018. They too will join Analy, El Molino and Elsie Allen making the move from the SCL to the NBL. Last year the Hounds finished 6th in league going 3-6 overall. Head Coach Dave Stine is managing expectations, “We are a young team with only five seniors. We lost a couple of key players who have either moved or are just not playing this year. We have some talent and I think we can be a pretty good team, but it will depend on our attitude and how we jell as a team. It can go either way, it’s up to our kids to decide what they want out of the season and to work hard for it. I think all of the schools will present us with a challenge, but as a coaching staff we expect the team to work hard and compete this season.”

Quarterback Brian Garcia (Jr.) looks to lead a team that only managed to score 10 points a game last year. Stine speaks fondly of him, “He is a strong leader, directing the team on both offense and defense. He is smart, has a strong arm and quick release.”

Garcia will be accompanied by Jake Edmunds (Jr.) who the Hounds plan on using at running back and wide receiver. The defense that allowed roughly 30 points a game last year looks for a resurgence with leaders like Enrique Lopez (Jr.), Andy Castro (Jr.) and Chris Dow (So.) who according to Stine, worked real hard in the weight room this offseason, “He has a great motor and is fun to watch.”

Head Coach Vertis Patton looks to right the ship in 2018. “Since taking over in May I feel we have been working really hard on building a culture and foundation for Montgomery with setting expectations for our players. I feel we have a lot of good athletes and all their hard field work and early 6 a.m. morning strength and conditioning commitments to the team will pay off. I feel that we will come out this year and be very competitive.”

Last year the Vikings finished tied for 7th in league going 3-6 overall. The 2017 offense averaged just under 27 points a game while the defense let opposing teams average just under 34 a game. The Vikings join the likes of Cardinal Newman and Rancho Cotate, as they have a ton of veteran leadership. Matt Carr (Sr.), Clayton Franklin (Sr.), BJ Johnson (Sr.), Gavin Lemos (Sr.), Jevon Heard (Sr.), Joe Martinez (Jr.), Cole Hallin (Jr.) and transfer Kham Perkins (Sr.) all look to lead the Vikings in the 2018 season. When asked about who he thinks will have a breakout year, Patton responded, “I think wide receiver/defensive back Devin Ramirez (Jr.). His work ethic in the weight room and his drive on the field have the coaches excited to see what he can do on game day. We expect big things from him on both sides of the ball.”

The final team joining Analy, El Molino, Elsie Allen and Healdsburg in making the leap from the SCL to the NBL is Piner. A big move calls for an even bigger introduction, lights! This is the first year that Piner will have lights at their field and all games will be live streamed as a part of the Piner Broadcast Club. Last year Piner finished 4th in league going 4-4 overall. Piner’s offense averaged just under 21 points a game while conceding 24 to opposing schools. Head Coach Tom Harris like’s his team chances in the Redwood division this year, “I think that all of the teams in our league are really well coached. I feel good about the progress we are making, we are working hard every day.”

An experienced offensive line returns for 2018, highlighted by Tommy Izard (Jr.), Antonio Marquez (Sr.) and Colton Roy (Sr.) who will help clear the way for running back Nick Gonzales (Sr.). Some players poised to have break out years are quarterback Yonaton Isack (Jr.) and wide receiver Michael Collins (So.) A long non-league schedule that features games against Rodriguez, Novato, Drake, Tamalpais and Lowell will have the Prospectors ready for league in 2018.

The Panthers 2017 season was less than ideal as they finished tied for 7th in league and went 2-7 overall. The good news is that this is the start of a new year in a new division with a chance to set a new standard. The 2017 offense averaged just under 23 points a game with a defense that allowed opposition to put up 27 a game. The only non-league game on the schedule is week 2 against Petaluma. A league heavy schedule, where they face off against Oak division schools as well, will tell us all we need to know about the Panthers in 2018. Leagues games of not include Ukiah on August 31st, Windsor on September 7th and a trip to Carrillo on September 14th.