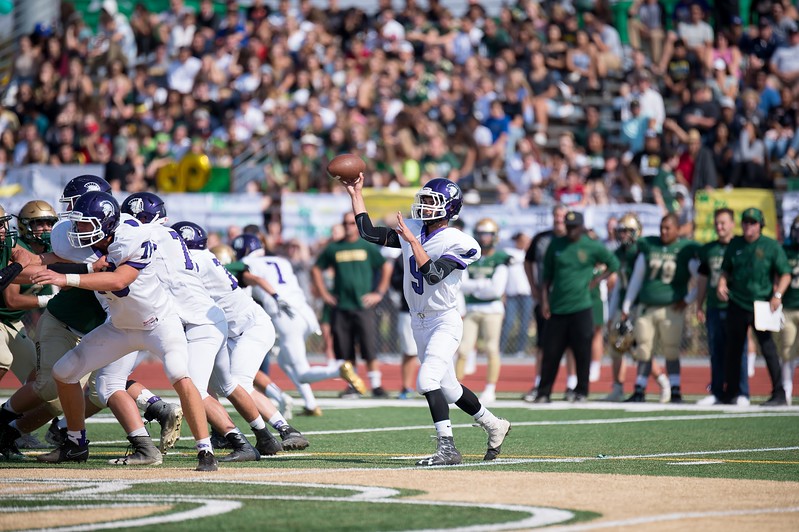 Week 10 of the high school football season is upon us. While some teams may have their last game of the season this weekend, most of the Sonoma County teams will be heading for playoff football.

This is rivalry weekend in the VVAL. Napa takes on Vintage, who is looking to win the inaugural VVAL Championship. This is dubbed as “The Big Game” and will be played at Memorial Stadium, where both teams share a home. This game will be Friday night. The other rivalry game will be the Egg Bowl between Casa Grande and Petaluma. This is a key game for both squads for NCS Playoff rankings. If Casa Grande loses on Saturday their playoff chances could be affected, since they are on the boarder of eligibility right now. the Gauchos are playoff eligible because they have guaranteed a .500 record in league play. A Petaluma loss greatly hurts at a middle of the pack seed, with a potentially more winnable playoff game. The third and final game in the VVAL this Friday night is Justin Siena @ American Canyon. Justin Siena is playoff eligible, despite a 1-4 league record. They are 2-1 against other Division 4 teams.

For the first time since 2007, the Analy Tigers will not be playing playoff football. They will finish their season at juggernaut Cardinal Newman, who may in fact be getting a little consideration for the open division. This is a long shot, but it would be special to see the Cardinals have the chance to battle some of the best teams in Northern California. Windsor travels to Maria Carrillo. Whoever wins this game will become playoff eligible, because one of them will have a .500 record against their division. Rancho Cotate hosts Ukiah in a game where both teams hope to  boost their NCS standing. Rancho Cotate is looking to grab a top 2 spot in the Division 2 bracket, while Ukiah is hoping to host a first round game and possibly a second round affair too.

championship, their first since they won the old NBL in 2009. They have a bye this week and will be preparing to most likely host a first round NCS playoff game. El Molino hosts Elsie Allen. The Lions need to win this game to become playoff eligible for the Division 4 bracket. Piner hosts Santa Rosa under the lights. Both teams have clinched playoff eligibility, but a big question is, will Piner be left out of the Division 3 bracket? The D3 bracket is very deep, but could slide in should any teams not become playoff eligible. Acalanes is very intriguing. They beat potential VVAL Champion and D1 Opponent, Vintage, yet they are not playoff eligible. Piner could slip in as a 16 seed in the D3 bracket since the Dons will not be participating.