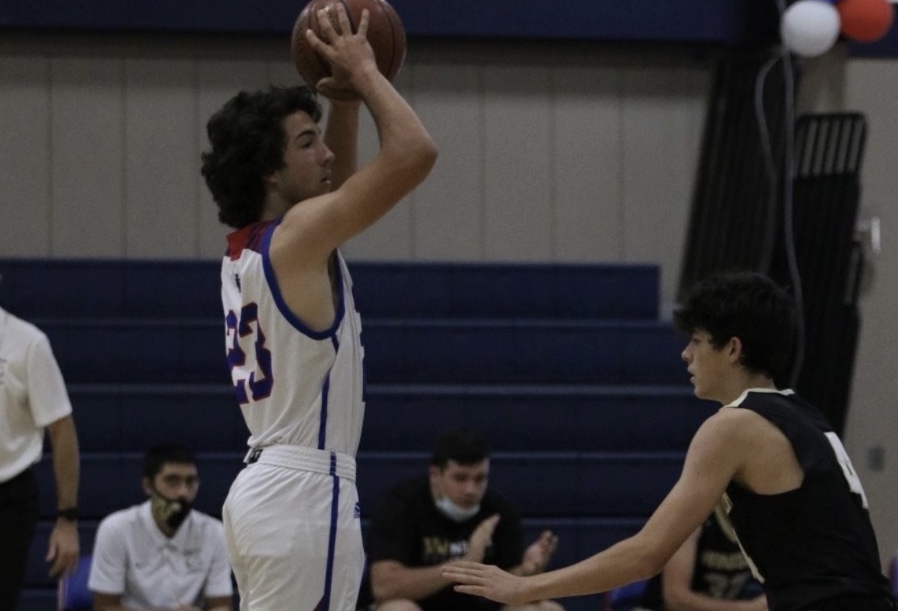 The St. Vincent de Paul High School boys basketball team is coming off a pandemic-shortened season that resulted in just two wins. Of their 11 losses, however, seven were by 12 points or less and five were single-digit losses. With nearly everybody returning for a normal season this year, things could be looking up for the Mustangs.

“It was really tough with the pandemic, we couldn’t coach them in the offseason, we have three-sport athletes, and we didn’t have the proper base going into our season,” head coach Tom Bonfigli said. “The kids stayed committed considering I had guys playing basketball and baseball at the same time and they could not be in practice for either sport.”

The Mustangs won their third game of the season before suffering a nine-game losing streak as they battled through the North Bay League-Redwood schedule.

With an enrollment of around 220 students, they were playing schools with anywhere from 500-1,700 students.

“We remained pretty competitive and improved as the season went along,” Bonfigli said. “The record of 2-11 I don’t think is indicative of the improvement. We had a really tough schedule in a new league against large schools.”

The team was not discouraged. In their final game of the season at Rancho Cotate, the Mustangs upset the Cougars 45-42 on the road. After a season full of adversity, Bonfigli felt a hint of relief.

“I was most happy for the players and parents because we hadn’t had a lot of success and it was a long season,” Bonfigli said. “It was difficult for parents and athletes but the response by the players after the game validated that if you can work through things together, you can be successful.”

“The Rancho win was a good takeoff win for us,” Iacopi said. “The kids saw that they can compete against larger schools not only in that game but down the stretch of the season.”

“I’ve learned a lot from the coaches I’ve been able to work with,” Iacopi said. “They are all coaches I have a ton of respect for and have benefited from their knowledge of the sport.”

Whether coaching with or against him, Bonfigli has always thought highly of his lead assistant.

“I always thought Nick [Iacopi] was one of the best coaches in Petaluma and probably in the area,” Bonfigli said. “With him being a local guy, he was a priority to be on my staff because he has a huge upside as a coach, the kids love him and he’s a great motivator.”

Bonfigli and St. Vincent placed an emphasis on hiring top-level coaches to develop players to be ready for when they suit up on varsity.

“Coaches need to promote your culture, teach your values and expectations, and Iacopi and [John] Molinari (assistant JV coach) do that fantastically well,” Bonfigli said. “When kids move up, they will understand that there is a St. Vincent’s way to do things.”

The Mustangs lost just one senior from last year and look to a bright future. With Piner and West County (formerly known as Analy) moving down to the NBL-Redwood and Windsor moving back up to the NBL-Oak, their league schedule poses many challenges. That is why they have scheduled smaller Division V schools in their non-league portion of the schedule.

The Mustangs will look to qualify for the North Coast Section Division V playoffs in 2021-22, something they have not done since 2017. Their nine games against Division V opponents will be critical to reach that goal. Whatever the season outcome, they will still be building for something bigger.

“We have the tools to be great, but everyone needs to get on board,” sophomore guard Hudson Stipp said. “It’s not going to happen right away, but we can get there, keep learning and be consistent.”

Stipp and others will look to learn from the three seniors St. Vincent de Paul will have back in Dante Antonini, Killian Collins and Jake DeCarli.

“Dante is committed to our basketball program as much as he can be even though he will likely be a scholarship football player, Jake is a great kid and a leader by example,” Bonfigli said. “Killian has been tremendously committed; he hasn’t missed anything. We have three good seniors to lead us.”