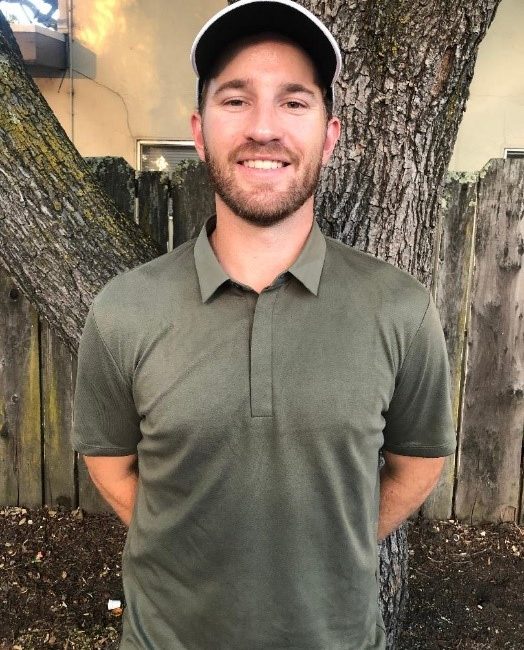 Patrick Steiner is an assistant pro at Windsor Golf Course and, it would appear, a young man with a bright future in the game.

According to Patrick, “this scholarship will help me greatly by easing the financial burden of traveling to Florida for my Level 2 testing, in purchasing material for my Level 2 and Level 3 courses, and would help me tremendously as I love forward to pursue my dream of being a head PGA professional in the sport I love.”

He goes on to say, “My immediate plan in the PGA is to become a Class A Member by 2021. In the future, I plan on going where the golf road takes me in order to become a head professional. I plan on being a PGA Member for life and hope to grow the game and meet good people along the way.”

Pat has been playing golf since he was 12 and started working outside services at Windsor GC when he was 17. Following graduation from Windsor High, he played two years while attending Santa Rosa JC and one year at Cal State Monterey Bay.

“At the age of 21 I started working in the pro shop as an assistant professional at Windsor. I then got lucky in getting a role in the Footjoy Hyperflex commercial which played on The Golf Channel for a year or so in 2015,” says Patrick. “After that I decided that I wanted to do golf for the rest of my life and worked on getting my three levels done in the PGA program (which I’m in the middle of) to ultimately get my Class A card in order to become a head professional at a course someday.

“I’ve been the assistant pro at Windsor GC for the past 6 years, and I’m planning on finishing all three PGA levels by the end of next year (2020) and grow from there.”

Patrick had plenty of endorsements by fellow golfers.

From Windsor head pro Jason Schmuhl: “I have known Patrick for over 10 years. During this time I have always been impressed by the way Patrick carries himself and his passion for the game. When Patrick told me that he wanted to get in to the golf industry and become a PGA Professionals I knew that he would make a good one.

“He possesses all the skills that one needs to succeed as a PGA Professional. He works well with others, is great with customers, well organized, a leader, a problem solver, and loves the game of golf. It is rare to have an employee and person that possesses all of the qualities Patrick has brought to Windsor GC over the years.”

From Foxtail head pro Matt Anderson: “I first met Patrick about 5 years ago through our local church and later connected again through golf. In those 5 years, I’ve seen Patrick’s passion for the game grow as well as his own game sparkle. Patrick has been a staple to Windsor GC operations and from what I’ve seen, he is willing to do whatever the course needs to be successful. I believe Patrick would make an excellent asset to The PGA and would be instrumental in growing the game in Sonoma County.”

“I’ve worked in the golf industry since I was 17, and I quickly saw how golfers behaved in such a professional and courteous manner. My experience with former and current PGA members has always been memorable and that’s what made me interested in the PGA,” explains Patrick.

“The PGA as a whole has so many great attributes to golf that I couldn’t see myself doing anything else at this point in my life other than becoming a PGA Member and working in golf.”

If you like golf and like enjoy outstanding writing with a humorous touch,  check out “Commander in Cheat,” by golf writer Rick Riley.

If you’re a supporter of Donald Trump, you may not appreciate what Riley chooses to divulge about Trump and his golf game, but most if not all of the details are substantiated . . . and revealing.

Riley chronicles and documents many of the stories about Trump and his well-known tendency to bend the rules . . . or more simply, cheat.

There are too many really good revelations to even start mentioning here, but let’s just say while you may or may not be surprised, I don’t know how you would not be amused.

Caddies at Winged Foot GC have a nickname for Trump and his efforts to improve his lie by kicking his ball out of the rough and onto the fairway  . . . the nickname they gave him is Pele’.

There are stories about Trump taking three or more shots off the tee – and not counting them — when he doesn’t like his first efforts.

Riley goes on to talk about Trump taking his golf cart ON the green, an incredibly thoughtless violation.  He also talks about Trump, if he’s behind a group about to tee off, simply driving his cart on the tee and teeing it up himself, then playing on.

There is a segment about him taking an 80-year old British family crest and making it look like a Trump crest by adding his name and some other words. He replaced the original word on the British crest “integritas” (integrity) with the word “Trump” and had it displayed on flags, signs, towels, golf balls . . . even on toilet paper!

He never asked permission to use the crest, which belonged to the Davies family. Joseph Davies was a former ambassador to Belgium and a special envoy to Harry Truman.

He might have had to asked permission of Davies’ grandson, Joseph Tydings, a Democrat and former U.S. Senator from Maryland. Tydings, when asked about the situation, indicated “you don’t sue Trump . . . you could be in court for years.”

Our current president is famous for his “Trump Bump,” which can magically turn a 79 into a 72.  Trumps claims to be a 2.8 handicap but is more a 10 or 11 by most accounts, which in itself is a handicap a lot of golfers wouldn’t mind claiming.

Trump once played with legendary Lee Trevino, who shot a 72. When Trump later introduced Trevino, he said “this is the great Lee Trevino . . . he just shot a 70.”

As the day went, on Trump kept changing Trevino’s score, first to 68, then 66.  According to Trevino, “I figured I had to get out of there before I broke the course record!”

Hey, I’m only halfway through the book and really looking forward to the rest of it.

You certainly don’t have to read the book or agree with it, but if it’s a little bit true that golf can reflect the kind of person you are, Riley seems to have done an exceptional job portraying the subject of “Commander in Cheat.”

Rooster Run PGA pro Dave Johnson continues with his summer junior golf camp schedule.  His camps are in their 15th year. The last half- and full-day camp is Aug. 5-9.

Also, to accommodate horse racing during the Sonoma County Fair,  Fairgrounds GC will be closed after play Sunday, July 28, and re-open Tuesday, Aug. 13.

Plans call to aerate greens, add greens to all bunkers and do additional work on tee areas, fairways and the rough.

It should be noted that Jessica, now living in Texas, is a former student of local LPGA teaching pro Jessica Reese Quayle.

Thanks again for comments, questions and suggestions. I love to get them and would really like to get more. If you have information about anything golf-related, including upcoming activities or tournaments or sales, please let me know. And if you have questions, complaints or compliments about golf in our area, I’d love to hear them.

If you have a golfer you know who you think would be an interesting story. Tell me about it.

And if you have any thoughts on the pending Oakmont GC sale, let me know what you think.

And we would be proud to include you as one of our sponsors – thanks to Bill Carson at Wine Country Golf for his continued support – so if you care to get some details about being a sponsor of GOLF 707, email me at [email protected]