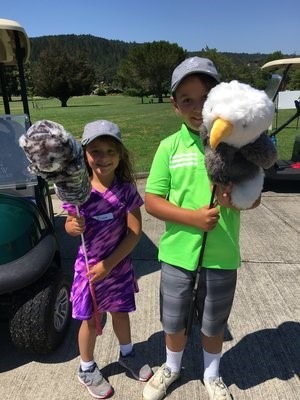 Greg Anderson has made a lot of stops in his golfing career, and he’s hoping his latest move will be another good one.

Anderson, a 1978 Cardinal Newman grad, has taken over as general manager and head golf pro at Oakmont GC, which features a regulation 18-hole layout and an outstanding 18-hole, par 63, executive course.

Greg was most recently director of instruction at Bennett Valley GC, where he developed a successful Junior Linksters program along with longtime BV pros Bob Borowicz and Jim Knego.

He’s not sure about the future status of that program and BV Teaching Center, although he may try to create a similar situation at Oakmont.

“Bennett Valley was a good experience, but when I heard about the position opening up at Oakmont, I realized it was a great opportunity to get back into the administrative end of the business.”

He has served as director of golf at Braemar CC in Tarzana and for Kendall Jackson Wine Estates. That’s where Greg and Jess Jackson attempted to build a course off of Bennett Valley Road in the mid-90s.

Greg took me on a a bumpy but interesting tour of that marvelous site on an ATV. It was a great location in the foothills that might have developed into one of the best layouts in Northern California, but zoning and environmental problems rendered the plan unworkable.

“We never moved a piece of dirt because of environmental issues,” recalled Anderson.

He’s been the head pro at Tilden Park (Berkeley), Foxtail and Sea Ranch. He and his wife Lori decided to move from Sea Ranch to Santa Rosa because their 17-year-old son, Rich, who was home-schooled, was taking extension classes at Santa Rosa JC.

While involved in golf, Anderson was has also been active in his Golf Vino business, which offers wine-and-golf tours in California. His clients have often been fellow golf pros who organize trips for their members.

With all that’s going on he plans to phase out Golf Vino. Interestingly enough, the 10 years he spent with Jackson taught him a lot about wine, and he actually passed the test to become a sommelier.

His move from BV to Oakmont was fairly sudden, according to Anderson.

“I heard about it on a Wednesday, applied Thursday, had a phone interview Saturday, interviewed with the Oakmont board of directors Thursday and was approved Friday, May 28.”

He replaces John Theilade at the Kemper-leased facility, with Theilade moving on to Petaluma G&CC.

While he has plans to upgrade the golf end of the business, he is concerned about improving the food and beverage portion as well.

“It (food and beverage) needs more attention on service,” explained Greg, adding that he wants to get the word out more effectively that the dining facilities “are not private!”

He said he has talked to people who think the golf course is private and that so are the restaurant facilities.

“We want people to know this is a daily fee course, open to the public,” he said. “It’s a great facility in so many ways, and also an outstanding wedding venue.”

Greg said he has good amount of “budgetary freedom” he hopes to exercise, including hiring of new employees in food and beverage as well as golf.

While he will initially be head pro, and available for lessons on a limited basis, he wants to hire a No. 1 assistant who will eventually take over as head pro so Greg can concentrate on the whole operations.

“This is a good facility but I want to make it better . . . we should really have more customers and make everyone aware of what we have and that we are open to the public.”

This is a homecoming of sorts for Anderson, who was “a cart dude” at age 16 at Oakmont.

He will be working with Pat Kerrigan and KSRO for a special celebrity tournament Oct. 1. Soon after that is a special event focusing on the October 2017 fires – foursomes will include one first responder – then the following week is the Santa Rosa City Tournament.

“I’m really excited and optimistic about this move, because I feel there is a lot of room for improvement here,’ said Anderson, 58. “Oakmont has a lot to offer and we want all golfers to know that.”

Format is two-person better-ball play over 36 hoes. The number of flights depends on the number of entries. The NCGA point event will also have a senior flight.

Cost is $250 per team and includes green fees for both days. Deadline is June 15, and a minimum of 72 teams will be required including the senior division, to proceed with the event.

The Junior Champions Challenge, for ages 11-17 is scheduled starting in June with Johnson putting together a week-long program for the experienced young golfer who is serious about developing their golf game.

To sign up or get more details, email Dave at davejohnson@roosterun.com

There will be a variety of activities including a tournament the last day of camp. Cost $175 per junior.

Call 284-3520 or go to taylorbattaglia@comcast.net

Jessica and Rebecka also, say, Label “everything,” including golf equipment; do not bring valuables to camp; cell phones should stay in your golf bag unless there is an emergency; golfers should bring a collared shirt with dress shorts (no jeans or cut-offs), soft-spike shoes or tennis shoes; golf clubs (although clubs are provided with advance notice); golf glove; hat or visor; sun block; water bottle.

We love getting comments and suggestions from golfers, pros and amateurs, so if you have

information about anything golf-related, including upcoming activities, please let me know.

If you have items of interest or questions about golf courses or golf businesses or anything golf-related , send them to be at bmeadows4sports@aol.com