GOLF707- Not Your Average Freshman ! 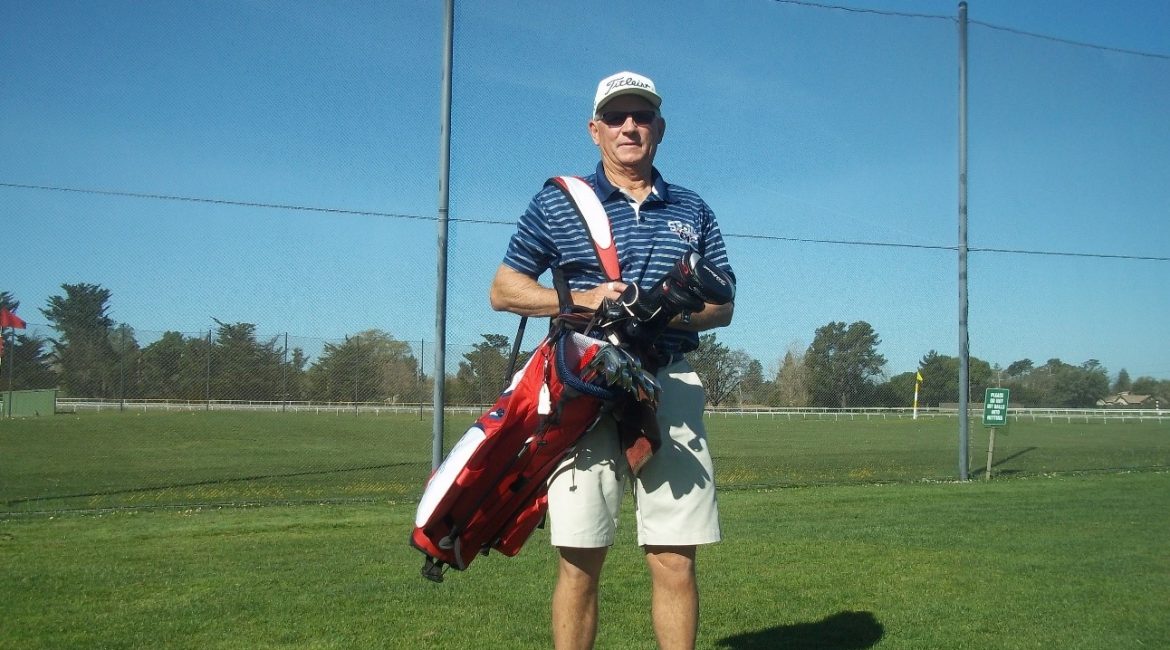 Not Your Average Freshman !

Santa Rosa JC’s Dave Herrington has been coaching the Bear Cub golf team for more than 20 years, but admits he’s never seen anything like it.

That would be the presence of Ron Myers on the 2018 squad.

Myers, a highly successful Bear Cub baseball coach before serving as interim Athletic Director and dean at the school, is currently playing in the No. 4 spot on the team  —  at 63 years of age.

“He’s locked in and playing well and the kids love him,” says Herrington. “I’ve never seen or heard about something like this before.”

Myers, who retired at SRJC last year, had thought about possibly playing for the team, but a series of events this year got him going.

Two potential returning players did not come back, mainly because of fire-related issues, and the general turnout was far less than usual.

“They usually have 10 to 15 guys try out but there were only seven this time,” says Myers, who attended SRJC and played baseball for the Bear Cubs (1972-74) before taking his academic and athletic talents to Fresno State, where he also earned his Masters in Physical Education. “I was shocked so see so few players.”

So Myers decided to give it a shot.

“I’m a decent player, not a great player,” he admits, but he has played well enough in weekly challenges to earn the No. 4 spot . . . six players make the weekly travel team and five scores are counted. And only once has his score not been one of the five counted.

He said he really started working on his game, getting his scores down to a point he felt comfortable competing for a spot.

“Dave had a meeting and he introduced me,” recalls Myers. “The kids have treated me great – zero negativity –  a fantastic experience.”

This is not some charity effort . . . the only way Myers can compete each week is if he is one of the top players, and so far he has been.

“I went out for the team not knowing if I was good enough,” said Myers, whose son DJ previously played for the Bear Cubs after being an

All-Empire player at Windsor High. “I always followed the team, and in past years I might not have made it, but this year the situation was different.”

Ron, who has had two knee replacements, didn’t start playing seriously until he was coaching at SRJC, and even then it was a part-time effort. He coached the baseball team for 22 years.

“When I was coaching baseball, I would never play during the season so it was pretty much a June through the fall game for me,” he says.

The team is currently in fourth place in the six-team division of the Big Eight Conference, but very close to third place. The top three teams advance to NorCals, something Herrington’s team do on a regular basis.

“I’m not as long as a lot of the guys we play against, but I can put it in the fairway and have a good short game,” says Myers, whose theory is “let the other guys make mistakes . . . bogeys won’t kill you.”

Ron said his wife Carrie and his three kids – DJ, Christa and Casey – support him, and DJ, who lives in New York “texts me after every match.”

He’s done a little research and as far as he knows, he is the oldest guy playing golf for a California community college.

“My friends, the guys I usually play with, tell me ‘you’re a hero at Windsor,’ but everybody supports me,” says Myers. “They tell me to keep it up, that I am doing it for the old guys.”

SRJC Athletic Director Matt Markovich, says “it’s great to see Coach Myers come out of retirement and play for the college. It’s been great for him and our team.

“He has been one of the most competitive individuals I know. Our student-athletes love playing with him and appreciate his dedication and support.

“I haven’t heard of this happening before, but being part of a college athletic team is a huge commitment and Coach Myers has been giving it his all since Day One of the season.’

Myers and Herrington have their sights set on making NorCals and possibly going beyond that. Both think the team is good and getting better.

“He might be the old man,” jokes Herrington, who himself is 70. “But he’s a good golfer and deserves to be playing. He’s a great example, usually is the first one at practice.”

And so far, that has been good enough.

Silverado Resort and Spa are offering two “demo days” in April. The events will be held on Saturday and Sunday, April 14-15.

Participants will be able to “test drive” the latest golf equipment from all the top brands at Silverado’s driving range at no cost to golfers. Sessions will be from 10 a.m. until 3 p.m. each day.

There will be equipment offered from Taylor Made, Titleist, PXG and Scotty Cameron on Saturday, and Callaway, Cobra, Mizuno, Nikashima and US Kids Golf on Sunday.

Matt Munoz is leaving Foxtail and heading to Napa Golf Club at Kennedy Park to fill the role as Head Golf Professional.

Matt Anderson, formerly Head Pro at Tayman Park in Healdsburg is now on board as Foxtail’s new Golf Operations Manager.

“We will miss Matt (Munoz) but it’s closer to home for him and we are excited to have Matt Anderson as a part of our team” says GM Mark Brouwer.

The Sonoma County Amateur will be at Foxtail May 19-20.  There will be a Championship Flight, Open flight, Senior flight, Super Senior flight, and a Women’s Flight. Check out the registration form for details.

Tentative plans are being made for a 2-Ball Championship at Foxtail  Sept. 9. with similar flights to the So Co Amateur – details still being worked out.

North course aerification was completed in early March and Brouwer notes, “The North course is in terrific shape right now and the rain has certainly helped,” adding that aerification on the South Course is scheduled to start April 30.

Also, Foxtail has planted 20 new trees on both North and South courses, Brouwer explaining, “We’ve had several trees die out from the drought a few years back and we are replacing them as we find them.”

Benefits include golf lesson discounts; $50 range cards for $25; a 10% discount on golf programs for family members, and “a chance to participate in fund, non-competitive golf tournaments.”

Cost for five lessons is $85, 10 lessons $140, with drop-in lessons available at $20 per lesson. You can also join the very beneficial Youth on Course program for $18, which is optional. There is also a Teen Golf program with similar fees.

Junior Linksters, ages 6-12, as well as the Teen program, was scheduled to start April 7, with one-hour time slots offered at various days of the week.

“The junior golf program at Bennett Valley Golf Course is gearing up for a great season. Our year-long program for children, Junior Linksters 365, is becoming the talk of the town as we continually grow in numbers and the kids mature as golfers and learn the great values of the wonderful game of golf,” according to Anderson. “If you are already a member, please spread the word. New participants are surely to have a wonderful time as we partake in a number of fun golf activities throughout the year.”

Greg, who espouses the philosophy that “every good golf instructional program foundation starts with junior golf,” said the Junior Linksters started with a good group in September of 2017 but then came October and the terrible fires and things stalled.

“I’m currently active with 25 kids and things should explode this spring and summer and more and more kids get involved every day,” adding that besides the PGA Junior League and North Bay Junior League, Junior Linksters “is looking to start a league of our own this summer . . . a lot of great things going on at BV.”

For additional details, go to bennettvalleygolf.com or contact Greg at greganderson@pga,com or call 707-696-1621.

“Our ‘Kids Play Free’ initiative has been in effect for just over three years,” explains Napa Golf Course’s Sean Silva, noting that age requirements are for juniors 17 years of age or younger.

“We don’t see that much play from the program, despite advertising and promotion,” adds Sean, who also sends out email blasts throughout the year and other methods.

Silva isn’t aware of any other course in the area that offers this program, that enables kids to golf for free when playing with a paying adult any day of the week, all year long, after 3 p.m.

Check it out and maybe ask your golf course if they have any thoughts of introducing a similar program.

We say this a lot, but kids are obviously the future of golf so the more of them we get out on the golf course, the better it will be for everyone. 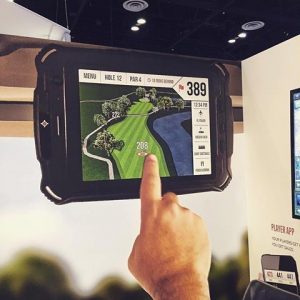 Quietech EFI is reportedly the first-ever Independent Rear Suspension on a golf cart and combines the quietness of electric with the profitability and dependability of gas.

Tayman Park Golf Group’s course in Healdsburg has also added the system, and Frank Johnson reports, “Our guests are really enjoying the technology.”

If you’ve had a chance to try the system, and have an opinion, let me know.

Monica Borowicz will be back in Mesquite, Nev., April 21-24 for the women’s national long-drive competition.

There are five 2018 competitions, including Mesquite; May 11-15 in Phoenix; June 4-5 in Atlantic City; Aug. 12-13 in Kingsport, Tenn., and Sept. 5 in Thackerville, Okla., the championship final. NBC will be televising women’s long-drive events.

Monica is hoping to gain sponsorship so she can compete in as many events as possible. She can be contacted through Bennett Valley GC.

Rebecka wants to help your putting

You can check it out on her website, www.rebeckaheinmert.com/info

For more details, call or text the Class A instructor at 408-616-0226 or go to www.rebeckaheinmert.com

With golf season getting into full swing, I hope to post GOLF 707 columns more often than during the wet months.

That being said, I would love to hear your comments, about anything golf-related as well as news about upcoming tournaments, clinics, sales, etc. and any new projects in the works at local courses.

Also, if you have a problem with a local course, let me know about it and I will see what I can do to figure out the best way to deal with it.

And, as usual, I would love to find additional sponsors for GOLF 707, such as Bill Carson of the Wine Country Golf Group. If you think you might have an interest, email me at bmeadows4sports@aol.com and we will take it from there.

I appreciate and need your support.