“I closed my eyes when I kicked it.” The third female kicker in 16 years for Petaluma High School has already made a huge impact on and off the field.

YSN 365 > News > Football > “I closed my eyes when I kicked it.” The third female kicker in 16 years for Petaluma High School has already made a huge impact on and off the field. 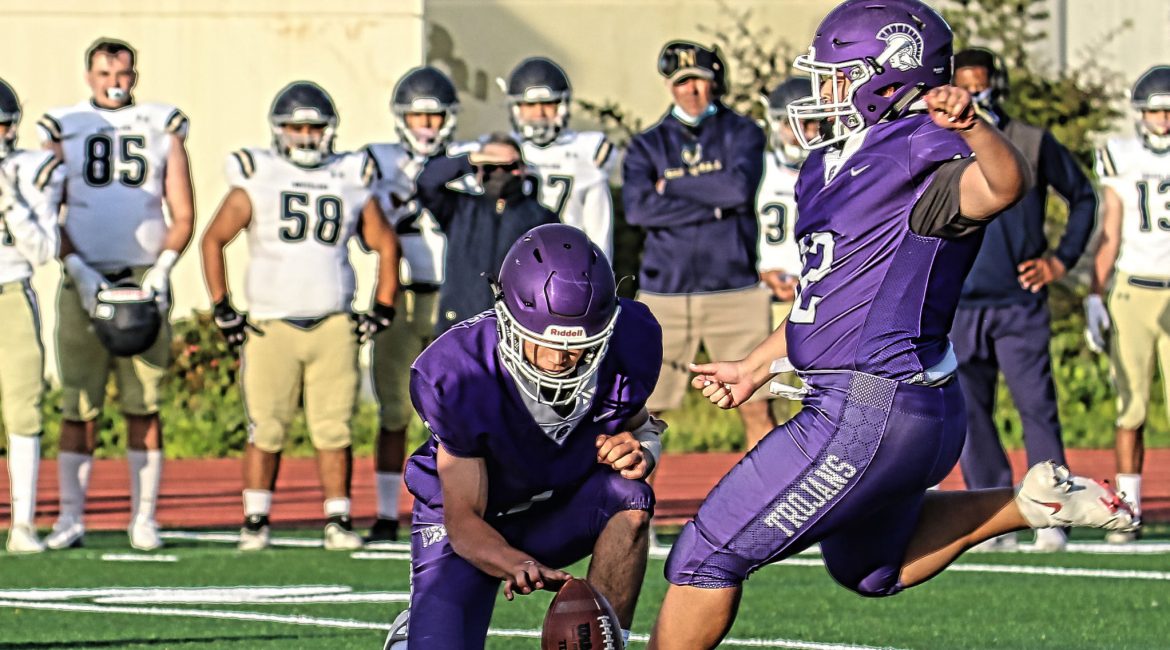 For Petaluma High School Head Football Coach Rick Krist, it wasn’t about a girl being his kicker, she was just another player.

“She earns the respect of her teammates,” Krist said of kicker Mackenzie Soper. “She’s a dedicated kid.”

Soper, someone who has played soccer for the last 13 years of her life, decided to try her hand at kicking for the Petaluma junior varsity team in 2019 as a sophomore. She is the third female kicker to don the purple and white since Sarah Peters in 2005 and Jordy Baddeley in 2009. It was that season that changed her outlook on the sport.

“That was so much fun, it was just my classmates, and I was all connected with them,” Mackenzie Soper said. “He {head JV coach Nick Emanuel] gave me a lot of confidence and was the reason why I came back for varsity.”

With plans for club soccer beginning to fall apart for Soper, Emanuel was given the go-ahead by Krist to bring her aboard, although it did come with concern.

Her mother, Jennifer Soper, originally had wanted her two children to attend Cardinal Newman High School for a more academic experience. A promise of an honors and AP classes loaded on Mackenzie’s schedule shifted the conversation to Petaluma High School where she will become a senior this fall.

When the COVID-19 pandemic struck the United States, California did not allow youth sports to be played. While all football teams could do were non-football workouts, Soper was still dedicated.

“She never missed a workout during COVID,” Krist said. “She was also a leader with our incoming freshman who we slowly got acquainted with our program.”

When the season got under way in March, Soper didn’t waste any time getting in on the action.

“She proved herself to the point where during the season she would jump in on scout team and compete,” Krist said. “She never backed down to anybody.”

Petaluma was outscored 65-0 in their first two games while all she could do were kickoffs. Soper had a conversation with defensive coordinator John Crudo the week leading up to their third game against Napa.

“Coach Crudo guaranteed we’d score and that this was going to be my opportunity,” Mackenzie Soper said. “In the first half my only chance was a field goal that I missed, and I was so upset, and I thought someone else was going to be put in if we scored now.”

With the Trojans trailing, two touchdowns tied the game at 13 apiece. Then came in Soper to try and win the game on the extra point.

“I closed my eyes when I kicked it, I could not even watch it,” Mackenzie Soper said. “When I opened them, I saw {Petaluma players} Tanner Starrett and Casey Pectol running at me and then I realized the kick went in.”

Krist was thrilled she had that moment.

“She totally earned it and the kids were all really excited about it,” Krist said. “She’s their teammate and it takes a special kid to come in and do that.”

The frenzy swept into the bleachers where a limited crowd was trying to make all the noise they could.

“I don’t think any of the parents had their voices after that Napa game, we were screaming so much,” Jennifer Soper said.

Following another victory over Sonoma Valley, the time had come for the Egg Bowl, the Petaluma-Casa Grande crosstown rivalry. With a rivalry that has been increasingly intense over the years, the uncertainty of how other schools would react to Soper’s situation returned.

“It’s fun but also always nerve wracking because you don’t know what the other teams will do especially with the social media back-and-forth,” Jennifer Soper said. “But it’s the most exhilarating sport to watch her play.”

Soper got two more chances to kick extra points, nailing both. The Trojans would hold on for a 20-14 victory over Casa Grande to win back the Egg Bowl trophy for the first time since 2017.

“That was so nice because last year we got beat up pretty good and they thought they were going to come out and beat us again and that didn’t happen,” Mackenzie Soper said. “I also loved that I made my two kicks.”

Soper plans to return to the gridiron for Petaluma this fall. She credits starting on the JV team for paving the way for her success to this point.

“Starting on JV made it way more comfortable for them and myself and laid the foundation for this year,” Mackenzie Soper said. “I was nervous to play with the seniors last year because I didn’t know what they thought of it, but they were all great to me.”