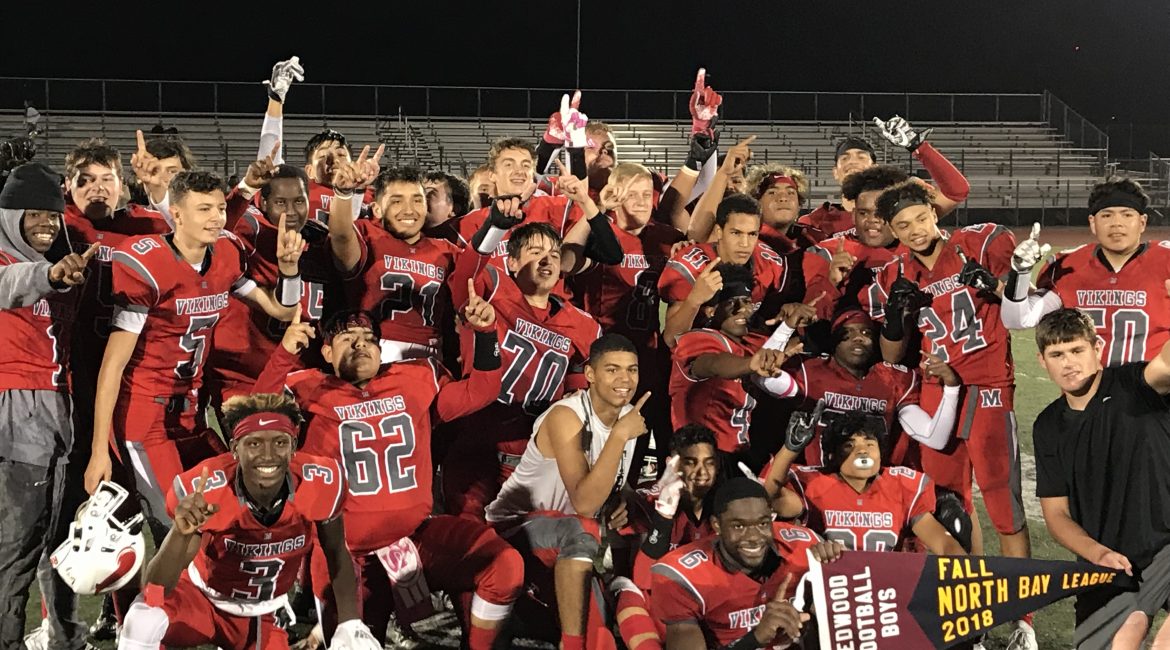 The Montgomery Vikings hosted the El Molino Lions Friday night in a game that had NBL Redwood League Title implications. If Montgomery won, they took the division. If El Molino won, the door for a potential three-way tie between Montgomery, El Molino and Santa Rosa would have been opened.

El Molino would strike first after a 27-yard field goal put them up 3-0 with 9:42 left in the first quarter. Montgomery would answer when quarterback Khameron Perkins (Sr.) found receiver Kaih Johnson (Sr.) for a 66-yard touchdown toss putting the Vikings up 7-3 with 5:54 left in the first. Both teams would trade subsequent drives and the first quarter ended with Montgomery leading El Molino 7-3.

Montgomery would have the last laugh after a pair of 18 yard completions put them in prime field position and Perkins would scramble 11-yards for a touchdown as the half ended. The Vikings led the Lions at half 21-17.

The Vikings opened the second half much like how they closed out the first—scoring. Running back Gavin Lemos (Sr.) would take a hand off 48-yards for a touchdown, extending the Vikings lead 28-17 with 11:09 remaining in the third. Montgomery would catch El Molino off guard by recovering an onside kick and Perkins would find Johnson for his third score—this time from 48-yards out. The Vikings now led 35-17 with 10:03 left in the third. El Molino kept responding and just 5 plays later Hilson took a handoff 15 yards for the score. Montgomery now led 35-24 with 8:56 in the third remaining. Montgomery’s ensuing possession would be a 7 play, 70-yard scoring drive that culminated with another touchdown pass from Perkins—this time 30 yards to BJ Johnson (Sr.). The score was now Vikings 41 Lions 24 with 5:48 left in the third quarter. The action packed third quarter would continue and with 40 seconds left on the clock El Molino rolled out a trick play where Strinfellow pitched the ball out to Wilson, who then tossed a 60-yard touchdown pass to Jackson Dunkle. Montgomery would lead 41-30 at the end of three.

The Vikings would seal the deal after a 5-yard touchdown scramble from Perkins would put the score at 48 to 30 with 9:07 left in the game. This touchdown would lock up the NBL Redwood League Title as El Molino would have another chance to get something going but were forced to punt with 6 minutes left in the game and Montgomery would run out the clock.

When asked what it was like to win a league title in his first year at the helm, Montgomery coach Vertis Patton took the focus off himself and concentrated it on the culture, “Feels good. I knew coming into the job that we had a lot of talent on the team and we wanted them to buy in and build a team atmosphere. Once we did that and started to see it manifest after each game, I felt like that’s when everything clicked.” Patton also mentioned how he will remember this NBL Redwood League Championship team, “This is a team of fighters. After the Carrillo game they believed, they believed in each other, they believed in us as coaches. Once they bought in to what we were preaching, it’s been amazing, they just keep fighting for each other. One guy goes down, it’s the next man up and we keep rolling.”

Montgomery will have a week off to prepare for the NCS playoffs due to Healdsburg cancelling the rest of their varsity season earlier this year and El Molino will close out the year next Friday when they host Elsie Allen.