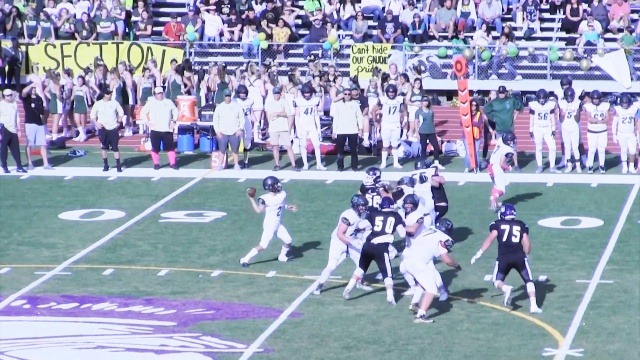 a. Immediately after the conclusion of the fourth quarter, officials will instruct both teams to retire to their respective team areas. The officials will assemble at the 50-yard line and review the tiebreaker procedures.
b. b. The officials will escort the captains to the center of the field for the coin toss. The referee shall toss a coin at midfield in the presence of not more than four field captains from each team and another game official, first designating the field captain of the visiting team to call the coin toss. The winner of the toss may not defer the choice and shall choose one of the following options:
1. Offense or defense, with the offense at the opponent’s 25-yard line to start the first possession series.
2. Which end of the field shall be used for both possession series of that overtime period.
c. The loser of the toss shall exercise the remaining option for the first extra period and shall have the first choice of the two options for subsequent even-numbered extra periods.
d. Extra periods: An extra period shall consist of two possession series with each team putting the ball in play by a snap on or between the hash marks on the designated 25-yard line (unless relocated by penalty), which becomes the opponent’s 25-yard line. The snap shall be from midway between the hash marks, unless the offensive team selects a different position on or between the hash marks before the ready-for-play signal. After the ready-for-play signal, the ball may be relocated after a charged team timeout, unless preceded by a Team A foul or offsetting fouls.
e. Possession series: Each team retains the ball during a possession series until it scores or fails to make a first down. The ball remains alive after a change of team possession until it is declared dead. However, Team A may not have a first down if it regains possession after a change of team possession.
f. Scoring: The team scoring the greater number of points during the regulation and extra periods shall be declared the winner. There shall be an equal number of possession series, as described in (e) above, in each extra period, unless Team B scores. Beginning with the third extra period, teams scoring a touchdown must attempt a two-point try. Although not illegal, a one-point try attempt by Team A will not result in a score.
g. Fouls after a change of team possession:
1. Penalties against either team are declined by rule in extra periods (Exceptions: Unsportsmanlike conduct fouls, dead-ball personal fouls and live-ball fouls treated as dead-ball fouls are enforced on the succeeding play).
2. A score by a team committing a foul during the down is canceled. (Exception: Live-ball foul treated as a dead-ball foul.)
3. If both teams foul during the down and Team B had not fouled before the change of possession, the fouls cancel and the down is not repeated.
h. Timeouts: Each team shall be allowed one timeout for each extra period. Timeouts not used during the regulation periods may not be carried over into the extra period(s). Unused extra-period timeouts may not be carried over to other extra periods. Timeouts between periods shall be charged to the succeeding period. Radio and television timeouts are permitted only between extra periods (first and second, second and third, etc.). Charged team timeouts may not be extended for radio and television purposes. The extra period(s) begins when the ball is first snapped.