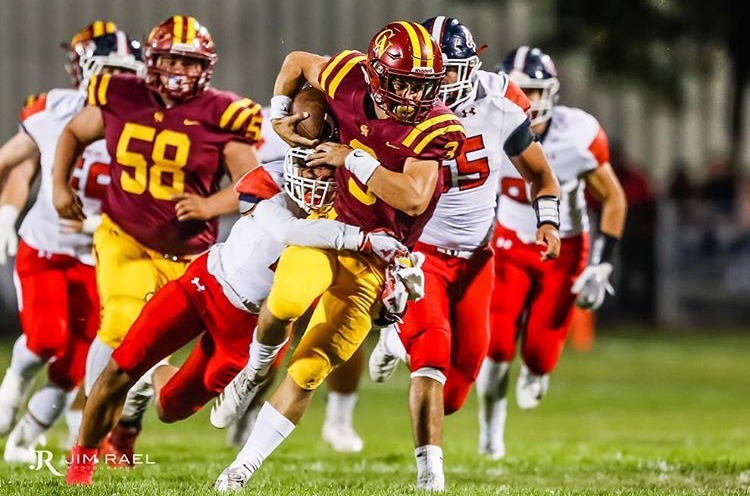 The Cardinal Newman Cardinals and Rancho Cotate Cougars opened league play on Friday night in a game that would see the winner join Ukiah atop the NBL’s Oak division.

It didn’t take long for the Cardinals to strike first as Giancarlo Woods (Jr.) took the opening kickoff 95 yards for a touchdown. Both teams would exchange a couple drives, bending but not breaking, until Shane Moran (So.) took a handoff and went 36 yards for a touchdown. Newman would take a 14-0 lead with 3:52 left in the first quarter. Rancho would try to respond, but a penalty and a sack would derail the efforts. After a punt that gave Newman the ball at their own 44, quarterback Jackson Pavitt (Jr.) would hold on for a 4-yard keeper that would set the table for a 52-yard touchdown pass to Julio Angel (Sr.) on the very next play. At the end of 1, Newman led 21-0.

The Cougars would respond, opening the quarter with a 53-yard run from Rasheed Rankin (Jr.), followed by a Jared Stocker (Jr.) 16-yard touchdown pass to Riley Cronin (Sr.). With 8:56 left in the first half, Newman led 21-7. Newman would respond with a 10 play, 80-yard drive that would end with Moran’s second touchdown of the night. Down 3 scores with 5:11 left in the first half, Rancho would begin to manufacture a drive until a high snap left them facing a 3rd and 19 from their own 13. On the very next play, Stocker would be intercepted by Jake Woods (Sr.), who would take it to the house and extend Newman’s lead to 35-7 with 2:03 left in the half. A quick 3 and out from Rancho gave Newman the ball back and they would capitalize yet again. Moran would score his third touchdown of the night—this time from 34 yards out. Newman would take an enormous 42-7 lead into halftime.

The woes continued for Rancho early in the second half, a missed field goal with 7:35 left in the quarter killed any momentum that may have been building. The third quarter would be relatively quiet, both teams would exchange blows in a battle of field position, but scoring was scarce. Early in the fourth quarter Rancho’s Sumari Jones (Jr.) would take a 3-yard handoff and find the end zone. Rancho trailed 42-14 with 8:32 left in the game. Newman would give Clayton Woo (Jr.) a steady diet of handoffs and pitches as they would try to kill as much clock as possible until Rancho would get the ball back with roughly 5 minutes left. The Cougars would scratch across another score when Bryce Potter (Sr.) took a handoff for a score with 58 seconds left.

After suffering their first loss of the season, Rancho Cotate coach Gehrig Hotaling knew his team had to hit the drawing board, “We just need to get back to basics. We hurt ourselves more than anything tonight. Just getting back to the basics; snaps, tackling, alignment and good things will end up happening for us. Just stay positive and good things will happen.”

Both teams will be back in action next Friday; Rancho will regroup and host Windsor, while Newman will travel to Ukiah and clash for sole possession of the NBL’s Oak division.