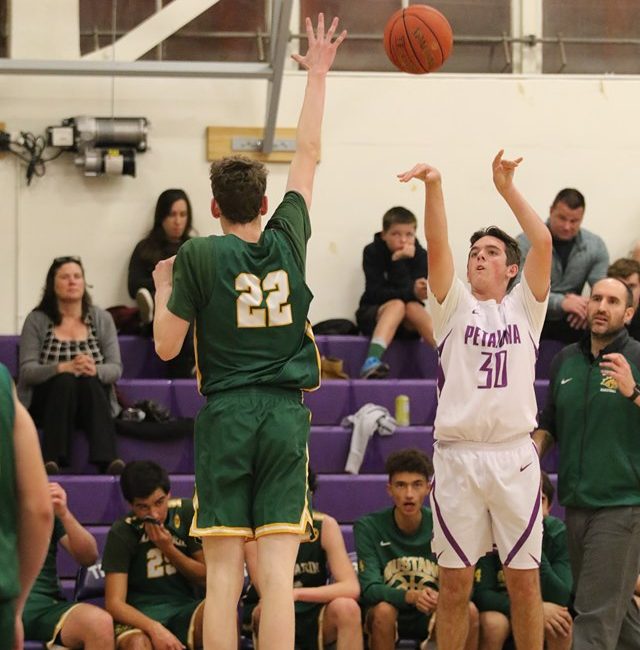 On Thursday the Petaluma Trojans took on the Sonoma Valley Dragons in a boys basketball matchup as the Trojans took their second win of the season and their first league win 68-48.

The first quarter got off to a slow start for both teams and it was back and forth for the most part. At the end of the quarter, Sonoma’s star junior guard Dom Girish hit a shot from beyond half court at the buzzer to give the Dragons a two point lead and some momentum.

Sonoma Valley's @domgirish hits one from way downtown to end the first quarter. With 2 mins to play in the first half: Sonoma 23 | Petaluma 21 pic.twitter.com/V8Gzbl7nWk

Sonoma carried the momentum into the second quarter and got the lead up to nine points but Petaluma’s senior guard Reece Lakritz put an end to it when he hit three straight three pointers to give Petaluma the lead. Lakritz would finish with 15 points shooting 5-9 from behind the arc. Petaluma would storm back from down nine to up four to end of the first half leading 31-27.

Junior forward/center Cole Garzoli started off the second half hot with three hard drives which resulted in five points and senior guard Eric Perez had two mid range buckets to extend the lead. When Sonoma went into a zone defense, junior center Salim Arikat hit three buckets from outside, including two three pointers. In total the Trojans scored 19 points in the third quarter to elevate their lead to 13 points.

In the fourth quarter Lakritz would add on two more three pointers to close out the night.