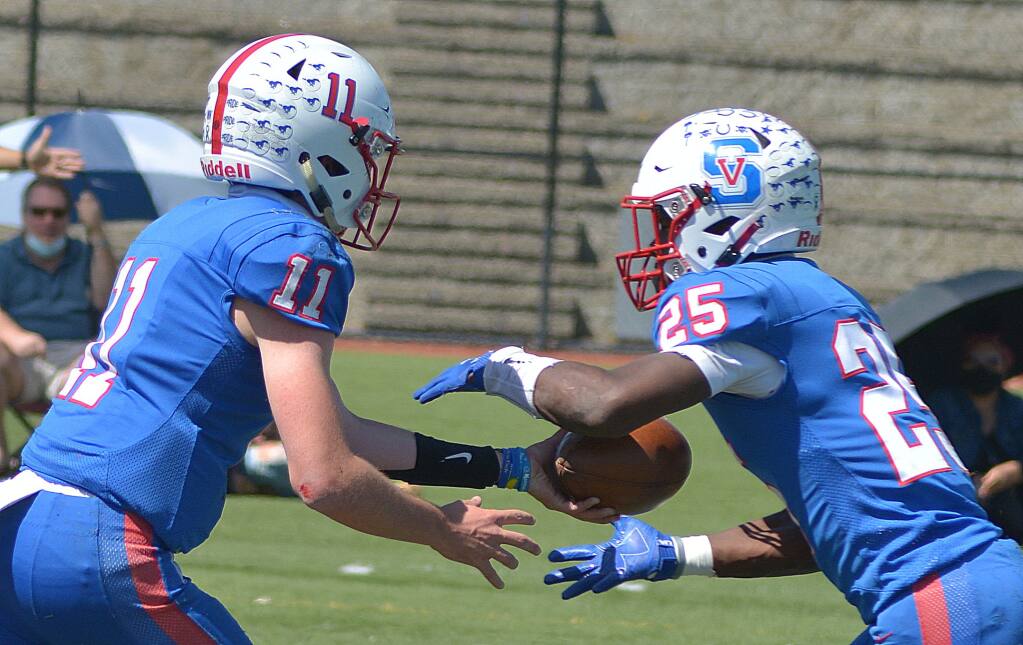 As football season starts up this Friday for the Vine Valley Athletic League and North Bay League, YSN365 is here to cover the preview for this season. As COVID-19 affected last year’s season and allowed for no preseason games, Coach Rick Krist of Petaluma High School discusses the importance of preseason games, especially this year.

Last season in the VVAL, the Vintage Crushers dominated the league going 6-0 and in those 6 games, only allowing 27 points. Offensively, they were very run heavy behind Dylan Smith who will be a senior this year and Louie Canepa who racked up 11 pancake blocks in the last season.

Casa Grande will look to improve this year as they had a very young team last year with only 7 seniors. They will be led by senior quarterback Jacob Porteous who had a 108.3 QB rating with 9 touchdowns and only 3 interceptions last season. Expect Ryder Jacobsen, Ethan Bucy and Antonio Bernardini to carry the load on the ground. Look for Marcus Scott and Shane Runyeon to be Porteous’ main targets. Scott was the second leading receiver with 213 yards receiving on 13 catches and a pair of touchdowns. For Runyeon, it was 13 catches for 187 yards and three trips to the end zone.

Petaluma is going to give the reins to their offense to junior Henry Ellis. Ellis replaces Jack Hartman who was the leader of the Petaluma offense over the past two seasons. Ellis will continue the Trojan tradition of the option offense but may have the arm to throw it in the air a bit too. Doran and Dawson Shaw look to be two of the main targets for Petaluma passing the ball.

The NBL-Oak was stacked with competition this past season and Cardinal Newman looks to do exactly what they did last season but Windsor and Rancho Cotate are going to put them to the test. Windsor will be led by senior quarterback Chase Vehmeyer who threw for 908 yards and rushed for 241 yards. Look for Damien Escarsega to lead the rushing attack after he ran for 237 yards on 38 carries. Second leading receiver Makhi Johnson returns after putting up 199 yards receiving in the spring for four touchdowns. The Jaguars will feature new coach Paul Cronin after making the shocking move north. Windsor held their own for the most part with Cardinal Newman  in the spring but we will see how far the gap is closed when the two meet on October 22 at Windsor.

For Rancho Cotate, they will be led by senior quarterback Ryan Kane who, last season, only passed for 522 yards on 42 completions but also rushed for 233 yards and 6 touchdowns. The very athletic Sailasa Vadrawale will likely be the top target for Kane since he was the second leading receiver in the spring. Vadrawale caught 13 passes for 233 yards but just one touchdown. The Cougars defense took a big hit this year losing Mihalis Santorineos who was an All-NorCal Linebacker and averaged 12 tackles a game.

The big loss for Cardinal Newman was Tsion Nunnally who caught seven touchdown passes for 520 yards in the spring. With their top three receivers from the spring all now out of the mix, new targets will be needed for Newman’s passing game. The Newman defense will be led by Santino Acevedo who was second on the team in total tackles as a sophomore at 41 while also picking off a pair of passes in their 28-21 win over Vanden on March 26. Cardinal Newman will host San Leandro on Friday night with that game broadcasted live on YSN365. Dave Cox and Jerry Robinson will be on the call!

West County, rebranded and formerly known as Analy, went 3-1 with the lone loss to El Molino in the final Apple Bowl, 35-27.

St. Vincent de Paul finished 2-2-1 last season behind a young core with junior running back Kai Hall and senior wide receiver and defensive back Dante Antonini. Hall rushed for 536 yards while scoring eight touchdowns in the five games the Mustangs played in the spring. Antonini caught 24 passes for 509 yards and seven touchdowns last season. Defensively, he also led the team in total tackles at 38 with junior linebacker Nathan Rooks tallying up 10 tackles for losses and 35 total tackles. Antonini was named to the All-Bay Area Football Preseason Second Team by West Coast Preps.

“I really feel Dante [Antonini] is the best player in the Redwood Empire,” St. Vincent de Paul Head Football Coach Trent Herzog said. “I think Vadrawale from Rancho is right there but I think Dante on both sides of the ball and moving him around makes him a top five player I’ve ever coached in 28 years.”

Hall, also an All-Bay Area Football Preseason Second Team nominee, was named the 37th ranked player in the Bay Area, also by West Coast Preps. Cameron Vaughn will anchor the offensive line as a junior. Jaret Bosarge, Dom Minton, Killian Collins and Jack Davis are expected to contribute on both sides of the ball. The Mustangs return nine starters on defense and eight starters on offense.

The two best teams in the North Bay over the last three years will finally do battle in what will be first year head coach Richard Sanchez’s third game of his Newman coaching career. The only aspect that may have made this game a little more exciting (like it needed more excitement?) is having the game at Memorial Stadium in Napa. We will have to expect that wish will come true in the fall of 2022 but for now, get ready for a county line battle in Santa Rosa in just a few weeks.

Michael Baribault contributed to this story.