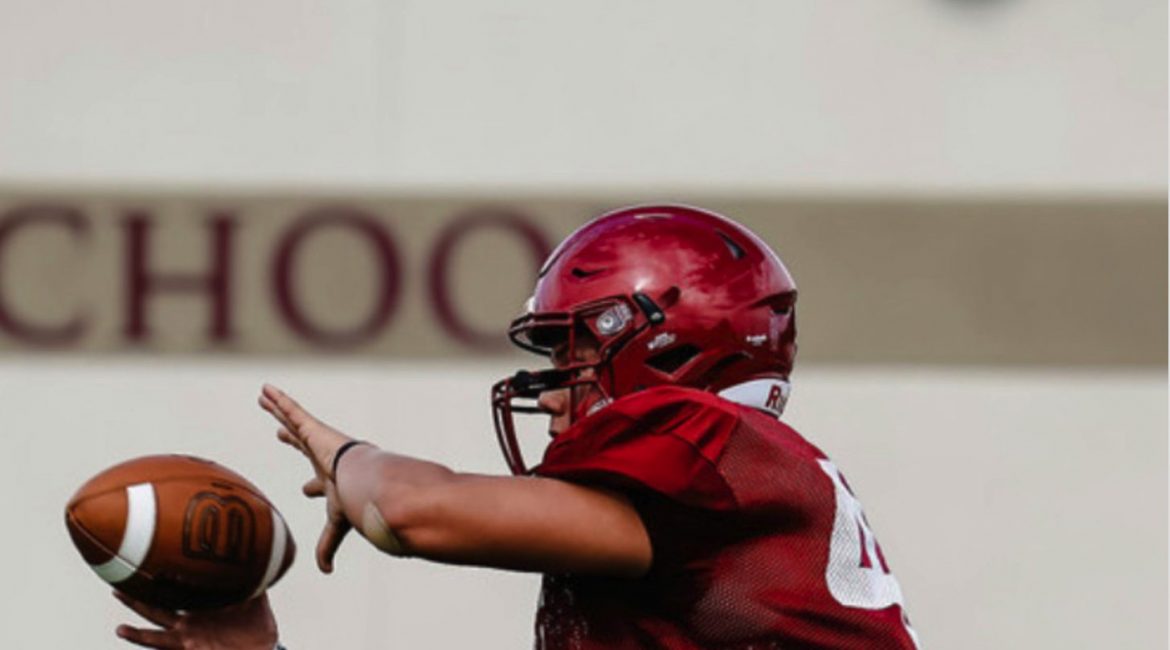 Last year was a rocky year with game postponements and cancellations due to COVID-19, but it was a good year. Fans sat on the edge of their seats around the county as Rancho stopped a 2 point conversion attempt by Windsor to clinch the Oak Title for the first time in seven years. Newman had won it 6 years in a row since the 2014 season and were coming off a 2019 State Championship season under Head Coach Paul Cronin. Cronin, however, left Cardinal Newman for Windsor and Newman hired Head Coach Richard Sanchez who had a great resume and did well in his opening season at Newman. Newman went 8-4, came 2nd in league and went all the way to the NCS D4 Title game where they lost to Marin Catholic. Cronin led Windsor to a great season, going 11-2, finishing 3rd in the Oak with a 3-1 record, winning the NCS D3 Title but losing in the Nor Cal Championship to Vanden. Analy finished 5th in league with a 1-4 record and had a 4-6 regular season record. The questions this year are: Will Rancho repeat?, Will Newman return to the top?, Will Windsor have another great season?, Will Santa Rosa and Monty get to the top in their first year?, and Will Analy be a dark horse and rise from a 1-5 league record in 2021 to the top in 2022?

Analy Tigers
Season Prediction: 5-5 (2-3 in League)
The Tigers are coming off a 4-6 season, but lost star WR/SS Ian Hocheder and MLBs Anthony Pacheco and Cassius Bradbury. The Tigers still have WR/DBs Giovanni Visintin and Solomon Hall. Hall had 19 tackles in 7 games and caused a fumble last year, but also had 12 catches for 241 yards and 2 TDs. Visintin was All Oak First Team last year, catching 21 passes for 286 yards and 3 TDs and also carrying the ball 10 times for 107 yards and a TD. He also threw an 80 yard TD pass last year and was 3rd on the team in all purpose yards. QB Sammy Long was 87 for 163 in 7 games, passing for 1,383 yards, 14 TDs and 9 interceptions. He is due for a great season and will have great protection from his offensive line which includes 2021 First Team All League OL Ty Scheffler. The Tigers will also have their RB1 returning. Jaden Brady had 112 carries for 534 yards and 8 TDs laat year for the Tigers and will make the Analy offense look scary. The defense lost some of their top MLBs, but still have their top MLB Lucas Castleberry who led the team in tackles per game last year with 34 tackles in 5 games, (6.8 per game). MLB Liam Drake led juniors in tackles last year with 36 in 8 games and also had 2 catches for 26 yards and a TD.
Santa Rosa Panthers
Season Prediction: 3-7 (0-5 in league)
A new addition to the Oak, the Panthers are coming off a great season in the Redwood. Despite losing star RB Carlitos Pardo and QB Julian Astobiza, the Panthers still have 2021 First Team Redwood All League WR/FS Nolan Frost who led the team in receiving yards, TDs and interceptions. Frost had 20 catches for 439 yards and 4 TDs, but also was great option for the Panthers on the ground, carrying the ball 45 times for 249 yards and 4 TDs. He will be a great dual-threat for the Panthers offense and will do well on the defense, too. Last year, he had 32 tackles last year along with a team leading 5 picks.

Despite losing big defensive contributors like Manuel Garcia who led the team in sacks last year and Ryan Hsez who averaged four tackles a game for the Panthers, the Panthers still have their 2021 First Team Redwood All League junior LB Adan Lemus. Lemus led the team in tackles with 70, averaging 7 per game with 3 of them being TFLs. He also had 2 sacks in his sophomore season. Lemus is a threat on the ground for the Panthers and will most likely be taking a bigger role in the Panthers runnung game after they lost their top 3 RBs. Lemus had 19 carries for 140 yards and 2 TDs. If Frost, who averaged 5.5 yards per carry and Lemus who averaged 7.4 yards per carry, become bigger contributors in the run game, the Santa Rosa offense will look very good.

Some other players who could become massive contributors are 2021 2nd Team All Redwood MLB/RB Louwegie Arriaga and Senior QB Henry Younger. Arriaga had 29 tackles in 9 games and also had 9 carries for 105 yards and 2 TDs, averaging 11.7 yards per carry. He could become the RB1 in 2022 and share carries with Lemus and Frost. Younger was the QB2 for the Panthers last year, throwing just 6 passes, completing 3 of them for 23 yards and a TD. He is expected to step up and be the QB1 in his Senior season, but will also have to compete with junior QB Nolan Bankston.
The Panthers start their schedule with San Rafael on August 26th and face Petaluma, Archie Williams, Ukiah and Maria Carillo before starting League against Windsor on October 7th.
Montgomery Vikings
Season Prediction: 6-4 (2-3 in League)
The Vikings are coming off a great season, but lost top playmaker and California leader in interceptions (11) Mason Hallin along with playmakers WR Justin Merriken, OLB Jaxson Howley, OLB Jaydon Shaw and OLB Dominic Olivo. Despite losing some playmakers, the Vikings still have star QB Lucas Foye, WR/FS Keegan Peterson, DL/RB Samuel Valenti, TE/LB Colton Whitestine and WR/DE Izeyah Wright. Foye threw 132 passes, completing 72 of them for 1,132 yards and 17 TDs last year. Despite losing 2 of his top WRs, Foye still will have top WRs to throw to like Keegan Peterson and Izeyah Wright. Peterson had 26 receptions for 514 yards and 8 TDs, and also rushed the ball 13 times for 109 yards and a TD. On defense, Peterson had 26 tackles and 4 picks last year. Izeyah Wright was the WR4 for the Vikings in his sophomore season last year, but made a big impact and is slated to be a top WR for the Vikings this year. Wright had 8 catches for 100 yards and 4 TDs, and had 11 tackles and 2 QB hurries on defense. Colton Whitestine and Samuel Valenti will be forces to be reckoned with this year on defense. Whitestine had 67 tackles, averaging 6.7 a game, a stat column he led the team in, and a pick last year for the Vikings. Valenti led the team last year with 7 sacks, had 3 hurries, had 55 tackles and was 2nd on the team in tackles per game with 6.1.
The Vikings open up their season with Ukiah on August 26th and play Bethel, St. Bernards, Casa Grande and St. Vincent de Paul before opening up League play at Cardinal Newman on October 7th.
Windsor Jaguars
Season Prediction: 7-3 (3-2 in League)
The Jags are coming off a historic season, but lost a ton of talent like Chase Vehmeyer (Playing for College of Idaho), Nick Fa’agata, Makai Johnson (Cal Poly), Damian Escarcega and Cayden Homan. They also lost head coach Paul Cronin, but hired DJ Sexton after he had a 9-0 season as the JV coach at Windsor. Windsor’s new QB is Judson Anderson, a 6’2″, 215 pound dual threat QB who led the Windsor JV team coached by Sexton to their 9-0 season. He is set to have a great season and will have some good recievers supporting him like Hayden Anderson who had 50 catches for 998 yards and 9 TDs and Gunnar Erickson who had 7 catches for 67 yards last year. Erickson also had 22 tackles and a forced fumble last year while Anderson had 37 tackles, a forced fumble, 4 picks and a blocked punt. Conner Contreras will be back also this year after having 31 tackles and 2 sacks for the Jags on the D-Line last year.

The Jags have a tough season and open it at home against Tamalpais and face Escalon, Campolindo, Lincoln and Skyline before opening league play against Santa Rosa.

The Cardinals are coming off a good season where they went 8-4 and finished 2nd in the NCS Division 4. Despite losing QB Lucas Knechtle, RB Albert Beerbower, WR Nick Beste, WR Cooper Kohut, WR Jacob Carinalli, OL/DE Dylan Wagner, OL Michael Gonzalez, OT Matt McCormack and OL Gabriel Bardis, the Cardinals still have explosive playmakers like Santino Acevedo, Nick Ayre, Jesse Myers, Zack Homan, Kaize Steverson, Santiago Adan and Jamari Gentry. Acevedo was the Oak Player of the Year last year, leading the league in rushing yards and TDs with 135 carries for 1,153 yards and 23 TDs. Acevedo also had 23 receptions for 241 yards and a TD and on the defensive side, had 76 tackles, 8 TFL and 3 sacks. Ayre was the Cardinals return man and had 24 kickoff returns for 490 yards and 15 punt returns for 251 yards. He also had 6 catches for 98 yards and 2 TDs. Zack Homan had 54 tackles (45 solo) last year, 5.5 sacks and 2 caused fumbles, and on offense, Homan had 3 receptions for 30 yards and a TDs. Kaize Steverson had 77 tackles (53 solo), a pick, a caused fumble and 1.5 sacks. On offense, he had 38 carries for 287 yards and 3 TDs along with 3 catches for 39 yards and a TD. Jesse Myers had 37 tackles, 11 TFL, 10 sacks (led League) and won NBL Oak Freshman of the Year. He is due for a great sophomore season. Santiago Adan had 21 catchesfor 237 yards and 3 TDs last year and could have a breakout season at Tight End. In 8 games as a freshman for Newman’s Varsity Team, Jamari Gentry had 21 carries for 218 yards and 2 TDs along with 13 tackles and a pass deflection. Gentry is due for an explosive sophomore season which will show off his speed and talent.

The Cardinals started with 4 home games last year and this year they start with 4 away games. After a scrimmage against Tamalpias, they open up on the road against San Leandro, Vacaville, Vintage and De Anza. They have their first home game against St. Mary’s on the 23rd of September before starting league against Monty on the 7th of October.
Rancho Cotate Cougars
Season Predction: 9-1 (5-0 in League)
The Cougars are the defending champs of the Oak and have most of their top playmakers returning. They are a top team not just in the Oak, but in the whole North Coast Section. Despite losing RB/LB Ryan Kane and DL/TE Giovanni Mencarini, they still have 3 star Cal Commit ATH Sai Vandrawale, QB Liam Keaney, 3 star ATH Ananias Walker, ATH Nick Fa’agata, ATH Tupotu Hale, ATH Jacob Pruitt, ATH Tyler Nixon and more. Sai Vandrawale plays WR and DB and had 18 carries for 139 yards and 3 TDs while catching 61 passes for 941 yards and 8 TDs on offense last year. Vandrawale had 40 tackles, 4 picks and 3 fumble recoveries on defense last year. Sai was Co-Player of the Year last year. Liam Keaney was 165 for 256 for 2,254 yards, 21 TDs and 10 picks. Keaney is a dual threat Rancho with 62 carries for 434 yards and 7 TDs. He is also the reigning Oak Offensive Player of the Year and is back for his senior season after leading the Cougars to the NBL Title.
Ananias Walker was a first team all league DB last year after putting up 32 tackles and a pick. Walker also had 31 catches for 428 yards and 4 TDs which led him to receive offers from Cal, Oregon State and Colorado State. He is a 3 star junior and could be an incredible contributor this year for the Cougars. Nick Fa’agata transferred from Windsor after a great junior year for the Jaguars where he was All-League last year. Fa’agata had 22 catches for 328 yards and 2 TDs on offense while having 21 tackles, 4 picks and 2 pass deflections on defense. Tipotu Hale had 39 carries for 160 yards and 2 TD and also caught 12 passes for 190 yards and a TD. He is entering his junior year and is expected to have a great year at Rancho this year. Jacob Pruitt had 26 carries for 171 yards and 2 TDs while having 18 tackles, a pick and 2 fumble recoveries on defense. He could be a great contributor this year for the Cougars. Tyler Nixon led the teams in tackles per game after putting up 78 tackles, 7.1 a game, a sack, 3 picks and a fumble recovery.
The Cougars have a tough season and open with Las Lomas away and play Redwood, Sacramento, Vanden and Pleasant Valley before starting League against Analy at home.