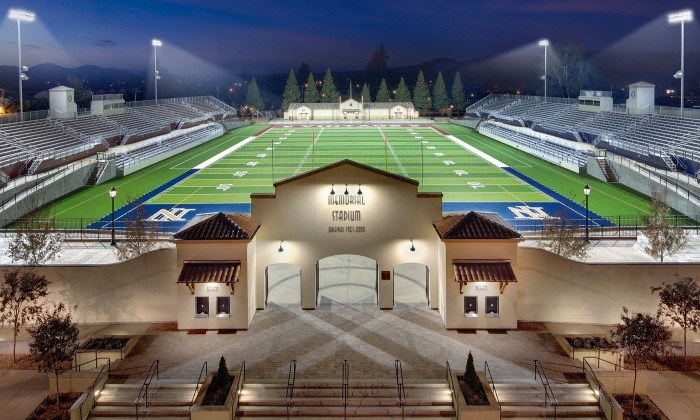 PETALUMA, CA – A cold night at Ellison Field didn’t stop the Petaluma Trojans from dominating the Napa Grizzlies, 41-22, in their penultimate game of the season.

Garrett Freitas shook off two early fumbles to put on one of the best running display’s you’ll see. He danced his way through Grizzlies before being brought down inside the 20 for a 28 yard run. Cole Powers kept himself for a 16 yard score to effectively put the game away early.

Play was a little sloppy for the first five minutes of the game. Napa (0-9, 0-5) had a quite a few dropped passes that led to a frustrated quarterback, Isaiah Newton. Petaluma wasn’t much better. Freitas fumbled for the first time in his high school career. Napa would get it back and move the ball, but penalties killed the Grizzlies and stalled their drive.

Petaluma (6-3, 3-2) got the ball back and Colton Prieto broke off a 67 yard touchdown run to erupt the crowd and the marching band, and put his team up 7-0.

Defense played a role throughout the rest of the quarter, but Petaluma started the next one at the Napa one yard line, and fullback Derrick Pomi pushed across for the score to  make it 14-0 Trojans.

Freitas added onto the momentum the Trojans would take into the half with a 25 yard touchdown run with 32 seconds left in the half as it was 28-0 home standers at the intermission.

“We were locked in during the first half. We were hungry.” said Petaluma coach Rick Krist.

Napa began to put up a fight. It started with Kalani Posey breaking off a 57 yard touchdown run down the sideline for a Grizzly touchdown. Two point PAT was good to make it 28-8.

Freitas would add more stats to his impressive season with a 52 yard touchdown run to answer right back. The Petaluma offensive line was seemingly dominant all game long over the Grizzlies defense.

Brock Bowers would take the end around all the way to the end zone for Napa’s second score of the game. The two point PAT was good again making it 35-16.

“We came out flat in the second half. We haven’t had a complete game all season.” noted Krist.

The fourth quarter was mainly for subs, and for Petaluma, on senior night, had most of their seniors in there. Powers called his number one last time for the final score for the Trojans, making it 41-16.

Newton would scramble his way for a touchdown at the end of the game to bring the score a little closer.

Napa finishes their season next Friday night at Memorial Stadium in “The Big Game.”

Petaluma ends the regular season in “The Egg Bowl” next Saturday afternoon.

“We are going to have to play a complete game to beat Casa Grande” Krist said.