Petaluma rallies back in the fourth quarter to upset Napa 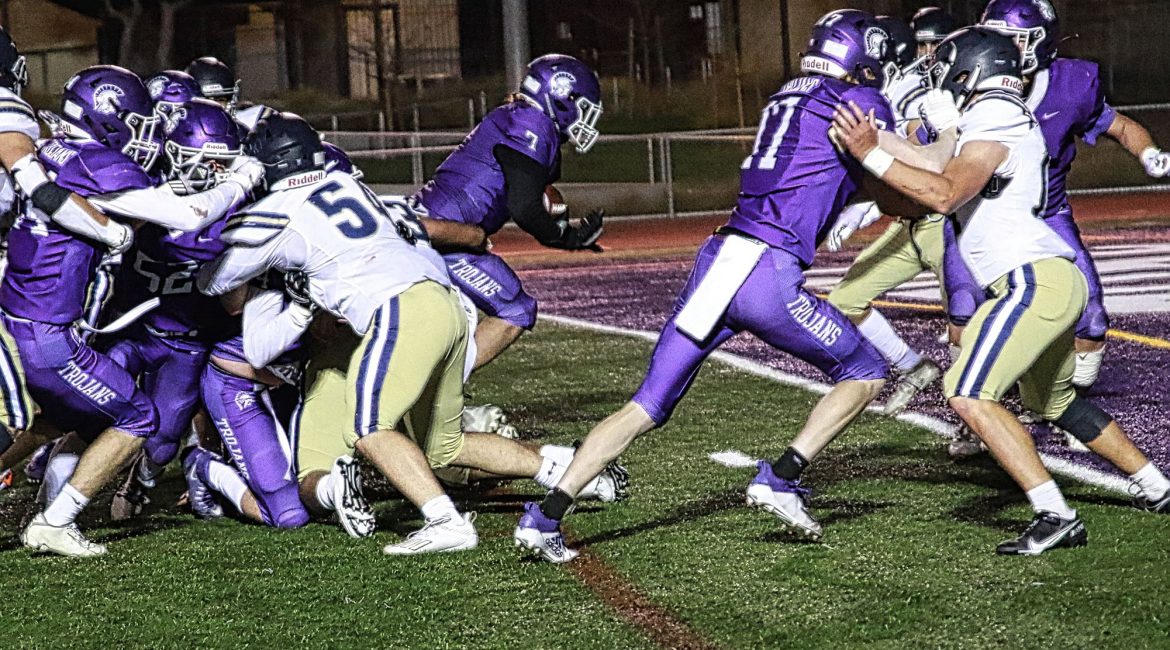 After having to cancel their game last week the Petaluma Trojans got their first win of the season in comeback fashion defeating Napa 14-13.

The game started out in an odd fashion as there was a miscommunication between the officials and the Napa sideline which allowed Petaluma to receive the kickoff at the beginning of the game and at halftime. The first half was very run heavy as there were only six total pass plays. The game remained scoreless going into the half.

At the beginning of the second half the Trojans would again receive the ball but they quickly gave it back to Napa on a three and out. The Grizzlies rallied by their star senior running back Benito Saldviar who ran for 46 yards on that drive and topped it off with a touchdown to give them a 7-0 lead. Petaluma hadn’t scored yet all season long and now looked like it was their best opportunity. After a resilient kick return from junior kick returner, cornerback, and running back CJ Powers for 30 yards, the Trojans couldn’t make anything of it as they punted on a three and out. Powers finished the game with 144 rushing yards on 23 attempts and a touchdown on top.

When Petaluma Head Coach Rick Krist was asked about how fortunate he is to have a player who can do it all such as Powers, he said “It’s hard to ask him to rest. You want him on the field at all times and that’s the biggest thing. He’s a playmaker and early on he was making tackles from the corner position on the opposite side of the field so he’s just all over the field.”

On top of his monstrous game offensively, he also finished with two interceptions and 243 total all-purpose yards.

Powers’ first interception at a big time as Napa had brought in a new quarterback and looked to bring a new approach to their offense but unfortunately, he would then fumble it on the first play of their new drive and give Napa the ball right back. Napa would then have a slow and methodical drive which included only running plays from Saldviar and their backup senior running back Manuel “Rabbit” Infante. After eight run plays Saldviar would end up in the end zone for his second touchdown of the night. Napa would botch the snap on the point after touchdown and their lead would stay at 13-0 with under six minutes left in the game.

Petaluma’s starting quarterback, Jack Hartman, who was supposed to sit this week due to a dislocated thumb, came into the game and in under a minute and a half, marched his team down inside of Napa’s 13-yard line and on 4th & 1 on the four-yard line, Powers plunged into the endzone for a touchdown and with a successful point after by junior kicker Mackenzie Soper cut Napa’s lead to 13-7.

Napa was able to recover the onside kick and now needed to try to chew some clock. Petaluma would hold Napa and the Trojans would get the ball and with just under four minutes to go.

The drive started off slow as Powers ran for about one yard and Hartman got an intentional grounding call setting the Trojans back but on 3rd & long, Senior wide receiver Rocco Palmini came up with a big toe drag catch on a perfect throw from Hartman. With the clock stopped and a big fourth down coming up, Hartman dumped off a short pass to Senior Receiver Tanner Starrett for the first down and then some. He would pick up 13 yards and Coach Krist would then call a timeout to stop the clock and talk it over with his team.

This next play that the Trojans ran, Coach Krist said that he got it from his 1972 playbook and that they had never practiced it before. Hartman completes the pass to Starrett, who draws in the cornerback and then dumps the ball off to Powers for a total gain of 35 yards. The hook and ladder now put the Trojans in the red zone with a little under a minute to play. The Trojans continued to pound the rock to Powers and their senior fullback Mario Zarco who would bring them all the way down to the two yard line with 33 seconds left. Zarco would score the Trojans’ second touchdown of the night to tie things up. Soper’s extra point was good to put Petaluma up 14-13.

Petaluma would get their first win of the season pushing them to 1-2 as Napa would pick up their second loss and they would fall to 1-2 as well.

Other scores around the Vine Valley Athletic League:

Casa Grande held on for a 49-46 victory over American Canyon after the Wolves made a furious comeback.