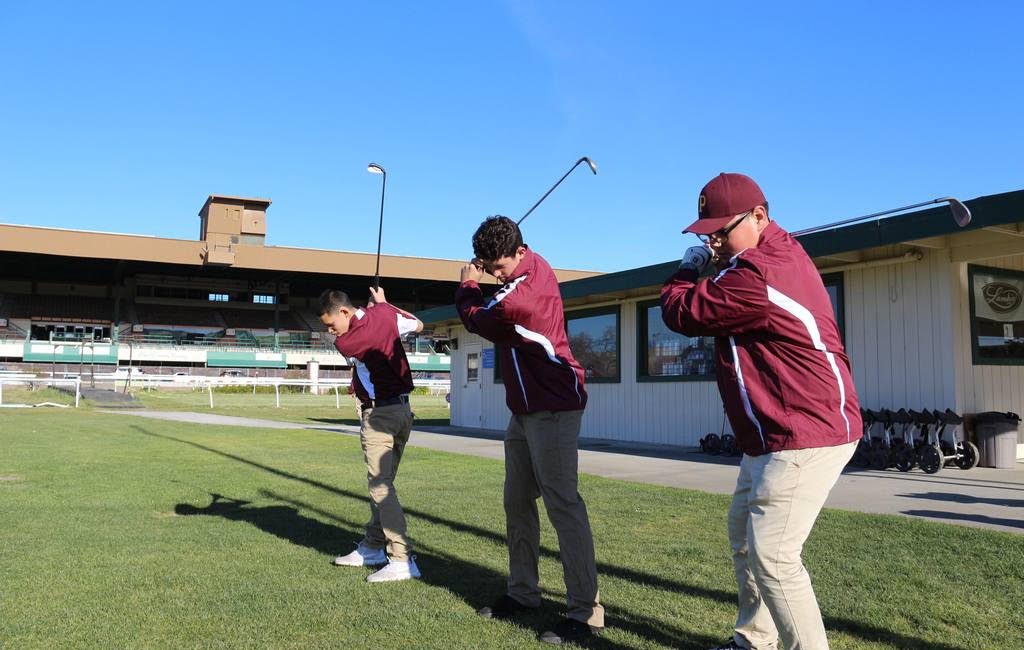 Piner High School’s Boys Varsity Golf finished with a winning record for the first time in 20 years. With 7

student athletes on the roster, the Prospectors’ completed a 6-4 season before coming up short in the SCL Championship tournament. The reason for their success lies with Head Coach Richard Gregus.

Gregus first took the job in 1998. In that 20 years of coaching, he has overseen this program make great strides. Just four years ago, Piner made headlines for knocking off an average of 20 strokes per player. When probed about the culture change that has taken place Gregus modestly responded, “My approach has always been the same, just stick to the basics: the grip, the stance, the swing and the finish. If you stay with the basics of golf there’s always going to be improvement.”

The improvement was rather noticeable and Gregus spoke about his team with great admiration, “Most of our guys shot in either the mid to high 40’s or low to mid 50’s. My most improved player started with a score of 73 and in his last match he shot a 53, a drop of 20 strokes.” Advancements ranged from the individual scores to the overall team score. The overall team score—an aggregate of the team’s top five scores—was as high as 296, during the season it dropped to as low as 253, a drastic 43-stroke difference.

Gregus previously taught for 32 years before turning to coaching. I asked about the similarities between the two and he said, “I find teaching in the classroom and coaching on the golf course similar. If you take the time to explain things, whether it be a theory in economics or how to hit a chip shot, you always stick to the basics and go over it again several times until it sticks. Then review it again.”

Sticking to the basics sounds easier said than done, especially when one considers having players who show up without their own set of clubs—which is a challenge that he has encountered during his time at the helm. “To make sure that everyone has clubs, I have either bought them on my own or have received donations from people that I meet in the community who know that I coach golf. I probably have, between my house and my golf locker, 20 to 30 sets of golf clubs.”

When questioned about other challenges his team faced during the season Gregus answered, “The wind at Bodega Harbour (Piner’s home course) can be a daunting challenge. There were times where you would literally get pushed back by the wind when you were standing in the tee box. We also had a match up in Healdsburg in a downpour rain. All that said, we were fortunate in the sense that we could always get the players to the matches either by coaches driving or having those with licenses helping out.”

Despite all the challenges that one may face on and off the course, the team remained focused and

motivated. Gregus recalled some of his favorite moments from the year, “Watching the smiles on their faces when they played really well. They would get excited if they got a birdie on a hole, chipped in on a hole or when they shot their best score of the season.”

Gregus certainly has an effective and humbling way of connecting with his teams. His philosophy stems from the movie The Legend of Bagger Vance, “Golf is a game that’s not won, only played.” This modest approach is evident by his appreciation for his Assistant Coach Jeff Goering, “Without his experience and assistance, we wouldn’t have had the season we did.”

His approach to the game of golf will continue to positively affect players for years to come. He looks forward to building upon this seasons’ success with five returning players ready to add additional experience and memories out on the course.