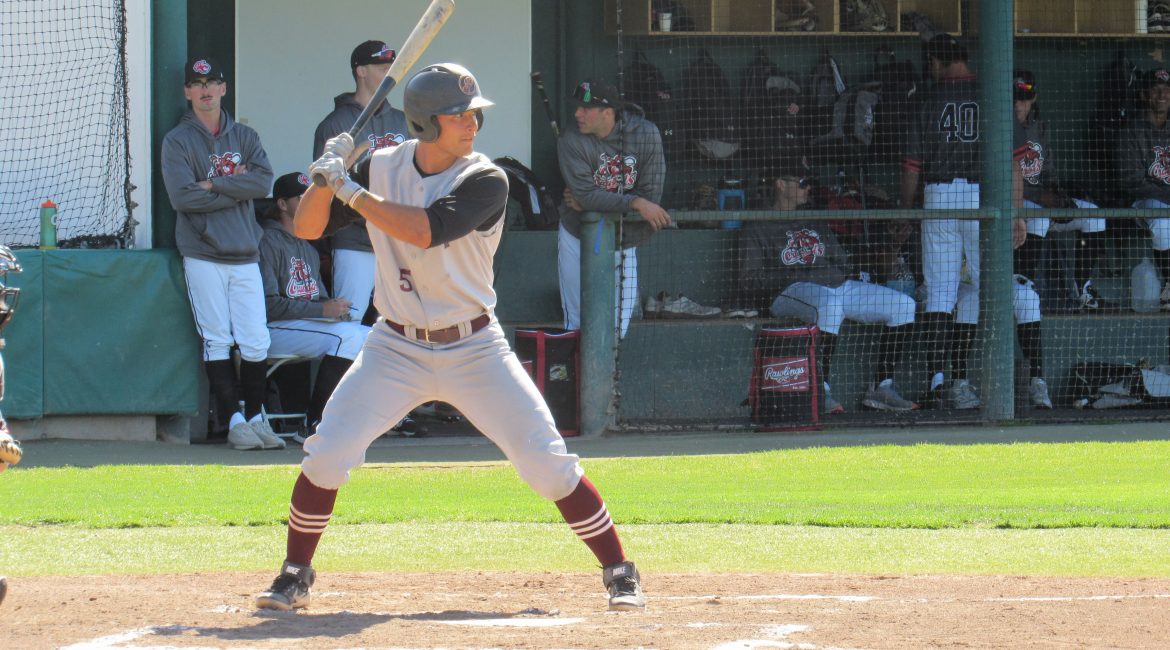 The fans at last Thursday’s Healdsburg Prune Packers vs Lincoln Potters game were told by public address announcer Dick Bugarske that their second baseman, Jason Dicochea, was playing his last game as a Prune Packer and a collegiate baseball player. He signed a contract to play professional baseball with the Boise Hawks of the Pioneer Baseball League.

“I’m super excited for it,” Dicochea said. “I got a call while I was at the gym and they said there was a spot out in Boise and Joey [Gomes] was pumped for me.”

Perhaps the people most excited for Dicochea’s opportunity were his teammates.

“He was the heartbeat of this Packers team and we’re all really happy that he’s playing professional baseball,” Prune Packer shortstop Ian McMillan said. “He deserves it.”

“He cares, he’s high character, everybody loves him and I think he’s every young kid’s favorite player here with kids buying his jersey,” Prune Packer manager Joey Gomes said. “He cares about his teammates and he’s been a big part of the culture that’s become this place.”

Dicochea gained the respect of not only his teammates at Santa Clara University, where he just graduated, but also his teammates in Healdsburg. McMillan, who played alongside Dicochea for two seasons, saw firsthand what he is like on a day-to-day basis.

“He treated himself like a pro before he was one and that’s his edge which will make him really successful because his preparation made everybody better since it’s contagious,” McMillan said.

Dicochea had high praise for the small wine country town where he spent his past few summers developing his game for the next level.

“I can’t say enough about Healdsburg and Joey, it will always have a special place in my heart,” Dicochea said. “It really is special in the Burg’ and I hope more players can play in front of these fans and play in this community.”

In fact, he enjoyed his time here so much he dubbed the team as the “best summer ball team in the country.”

“I appreciate him sharing that sentiment in how he feels about this place, it’s humbling,” Gomes said. “We get high character, tough and talented guys like Jason and they come to the Burg’ and thrive.”

The tough factor was seen firsthand as Dicochea was hit by seven pitches in the first nine games of the season, including getting hit three times in the Packers’ opening day victory over the Solano Mudcats.

Physical mistakes happen in sports and in the game of baseball, failure is a part of the game. However, excuses were not in Dicochea’s DNA.

“He held himself super accountable for everything. It’s easy to make excuses but he never did,” McMillan said. “When he made a mistake, he never made it twice.”

HAWKS RETAKE THEIR LEAD! After Ogden tied it up at 2 in the bottom of the first Boise gets a run on a Jason Dicochea Sacrifice Fly and they lead it 3-2 in the top of the 2nd!!

For Gomes, check off another name who will be making the jump to the pro game. Former Prune Packers Andrew Vaughn of the Chicago White Sox and Anthony Bender of the Miami Marlins both have made their mark in MLB. Dicochea is now on his way to become the next name on that list.

The Prune Packers are off to an 11-1 start behind a team ERA of 1.68. University of Michigan’s Noah Rennard has been one of the more impressive pitchers. In 13 innings, he’s allowed just 10 hits without giving up an earned run. In 107 total innings, Prune Packer pitching has struck out 132 batters in total. Six Healdsburg pitchers have double digit strikouts through the first two weeks.

The power swing has come alive for the Prune Packers as of late. Tennessee commit Blake Burke leads the team with four home runs, Cal’s Cole Elvis with three and five Packers behind that with two homers each. Burke and ninth place hitter McMillan are tied for the team lead in RBI at 15 apiece.

The Prune Packers hit the road for a quick two-game road trip as they’ll take on the Walnut Creek Crawdads this afternoon at 4:30pm at St. Mary’s College hoping for their 10th win in a row. On Thursday they will travel to Lincoln for a game with the Potters before coming back for a four-game homestand kicked off with a two game series with the West Coast Kings at Rec Park.