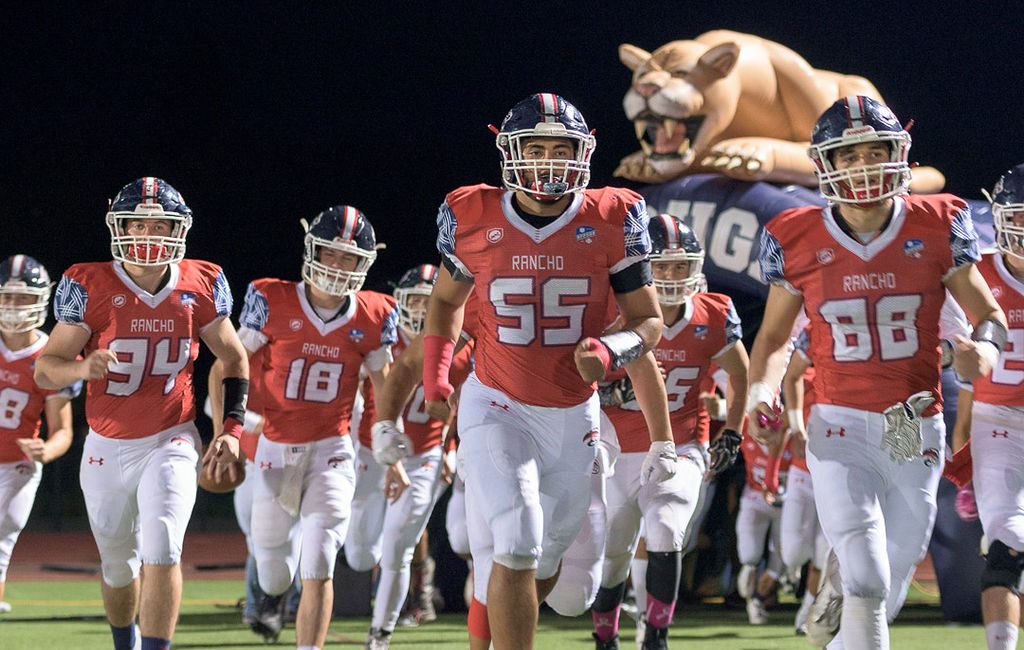 The Rancho Cotate Cougars lined up against the Windsor Jaguars on Friday night as both teams continue to fight for the NBL Oak Division crown. The Cougars were trying to avenge a loss to Cardinal Newman while the Jaguars were riding high after beating Analy.

Rancho struck first after a Rasheed Rankin (Jr.) 2-yard score put the Cougars up 7-0 with 9:55 remaining in the first quarter. Windsor’s response would be a three and out quickly giving the Cougars the ball back. Rancho would extend their lead after quarterback Jared Stocker (Jr.) connected with receiver Brandon Proschold (Jr.) for an 18-yard touchdown pass. 7:23 left in the first and Rancho led 14-0. Windsor woes would continue, and another three and out would put the ball back in Rancho’s possession. The Cougars would go on a 10 play, 41-yard drive that would end with a 23-yard field goal from Andrew Alfaro (Sr.). Rancho Cotate would lead 17-0 with 3:19 remaining in the first. It looked as if Windsor was finally primed for a response until quarterback Nick Pariani (Sr.) was sacked, lost the football and somehow recovered it. Then, on the very next play Landan Estrella (Jr.) would take a handoff and cough up the football. This time Rancho would recover and capitalize a few plays later when Rankin would take a 3-yard handoff in for his second touchdown of the night. After the first quarter, Rancho Cotate had a 24-0 lead over Windsor.

The second quarter seemed to be a bit more promising for the Jaguars until a 5-play drive ended in a punt. Rancho would drive up the field and a 37-yard pass from Stocker to Connor Barbato (Sr.) would set the table for another Alfaro field goal—this time from 27 yards out. Rancho now led 27-0 with 8:00 remaining in the half. Windsor would hold onto the ball for a couple minutes before punting it back to Rancho. After a 19-yard pass from Stocker to Barbato and a pair of handoffs to Rankin, Stocker would connect with Ryan Hupp (Sr.) for a 28-yard touchdown toss. Rancho Cotate would take a 34-0 lead into halftime.

The second half was a bit quieter with both teams trading opening drives. Windsor’s Oscar Mayorga (Jr.) picked off Stocker with 7:20 left in the third, but Windsor was unable to generate any further momentum. Rancho would force the Jaguars to punt again and go on a 9 play, 51-yard drive that culminated in a 2-yard score from Rankin—his third of the night. The third quarter would end with Rancho up 41-0 and they would tack on another 3 after a 40-yard field goal from Alfaro would extend the lead 44-0 with 11:00 left in the game. The rest of the game would see Windsor punt the ball to Rancho, Rancho fumble it back to Windsor and Windsor running out the clock.

Rancho’s head coach Gehrig Hotaling was extremely satisfied with his team’s response from last week, “We went back to basics. We knew that right after the Newman game that is what we had to do and we had our best week of practice by far. It translated tonight and it was fun to watch. We are taking things one game at a time moving forward and we are going to try and replicate this effort and our practice habits. The guys are young, hungry and talented. I just love having them on my team.”

Both schools are in action next Friday night: Rancho will travel to Maria Carrillo and Windsor will host Cardinal Newman.