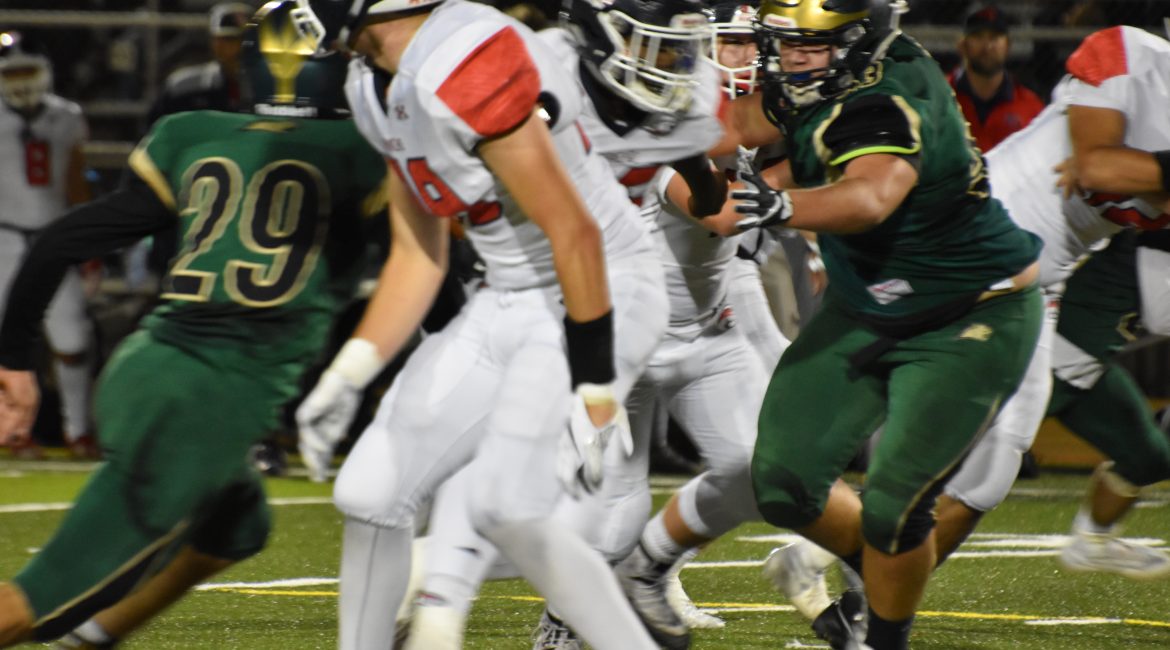 The Maria Carrillo Pumas hosted the Rancho Cotate Cougars Friday night in a game that not only had NBL Oak Division implications, but also featured a combined 9 touchdowns between both teams.

After both opening drives amounted to nothing, Rancho struck first when quarterback Jared Stocker (Jr.) found receiver Connor Barbato (Sr.) for a 64-yard touchdown strike with 6:07 left in the first quarter. Maria Carrillo would string together a couple plays before having to punt the ball back to Rancho and on the first play of the drive running back Rasheed Rankin (Jr.) would take the handoff 42-yards to the house. The score would extend the Cougars lead 14-0 with 2:49 remaining in the first quarter. Carrillo’s KC Kelly (Sr.) would be intercepted by Rancho’s Erick Montesantos (Sr.) and the Cougars would put together a nice 6 play drive that came to a screeching halt after Stocker would be picked off by Carrillo’s Logan Kraut (So.). The first quarter would end with Rancho leading Carrillo 14-0.

The second quarter began with Carrillo putting together a solid drive, but back-back penalties and giving up a sack on a 3rd and 17 would force a punt back to Rancho. On the very next play, Stocker would connect with Dylan Barella (Jr.) but Carrillo’s Kraut would rip the ball away as Barella tried to run by. With 8:47 left in the half, momentum had seemed to swing in Carrillo’s direction until they turned the ball over on downs. Rancho would take the ball at their own 6-yard line and proceed to go on a 10 play, 94-yard scoring drive that was punctuated by an 11-yard touchdown run from Rankin—his second of the night. Rancho looked like they would be taking a 21-0 lead into halftime until Carrillo’s Kelly connected with running back Jack Sherman (So.) for an 80-yard touchdown pass as the half expired. At the half, Rancho had a 21-7 lead.

The Cougars would get the ball to open the second half and waste no time. Stocker would link up with Barbato for a second touchdown pass—this time for 51-yards—putting Rancho back in the drivers’ seat up 28-7 with 11:05 left remaining in the 3rd quarter. Carrillo was already without their playmaking RB/LB Tyler Van Arden (Sr.), who sat out the game due to an undisclosed injury, but then WR/DB Kraut left the game with a shoulder injury and did not return. The Pumas offense was unable to generate anything and gave the ball back to the Cougars who went on a 7 play, 49-yard scoring drive in which Rankin posted his third score of the night—this one from 16-yards out. Rancho now led 35-7 with 7:21 left in the 3rd. Carrillo would respond, 3 plays later Sherman would take a handoff 72-yards for a touchdown, putting the score at 35-14 with 6:23 left in the third. Unfortunately for Maria Carrillo, Rancho wasn’t finished scoring. The Cougars would go on another 11-play scoring drive, this time with LB Elias Rantissi (Sr.) taking a direct snap for a 6-yard touchdown run. Carrillo would go 3 and out, and Rancho would score 2 plays later when RB Sumari Jones (Jr.) would pound his way in for a 1-yard touchdown run. Carrillo would be turn the ball over again; this time Kelly was intercepted by DB Ryan Hupp (Sr.) The third quarter would end with Rancho up 49-14 on Carrillo.

Rancho would register their final touchdown of the night with 10:39 left in the game, putting them up 56-14. The 4th quarter was uneventful aside from a successful fake punt from the Pumas, but this would be the extent of Carrillo’s response.

Rancho Cotate coach Gehrig Hotaling was proud of the adjustments his team made, “We cleaned things up at Halftime, we came out flat and it was more mentality than anything and we understand that at this point in the season we have a bullseye on our back. We have to come out fast, aggressive and smart every game.”

Maria Carrillo coach Jay Higgins addressed the health issues his squad has been facing, “(Van Arden) was nursing an injury, we are trying to get healthy and take care of our athletes. Having injuries on our team is a challenge but the positive is that even despite diminishing depth, we still have guys who get out there and fight hard. I’m proud of their fight, it’s just tough without the depth. It seems to magnify the various things that we need to overcome in a game.”

Both teams will suit up the away uniforms next week as the regular season heads down the final stretch. Rancho will travel to Analy and Carrillo will travel to Cardinal Newman.