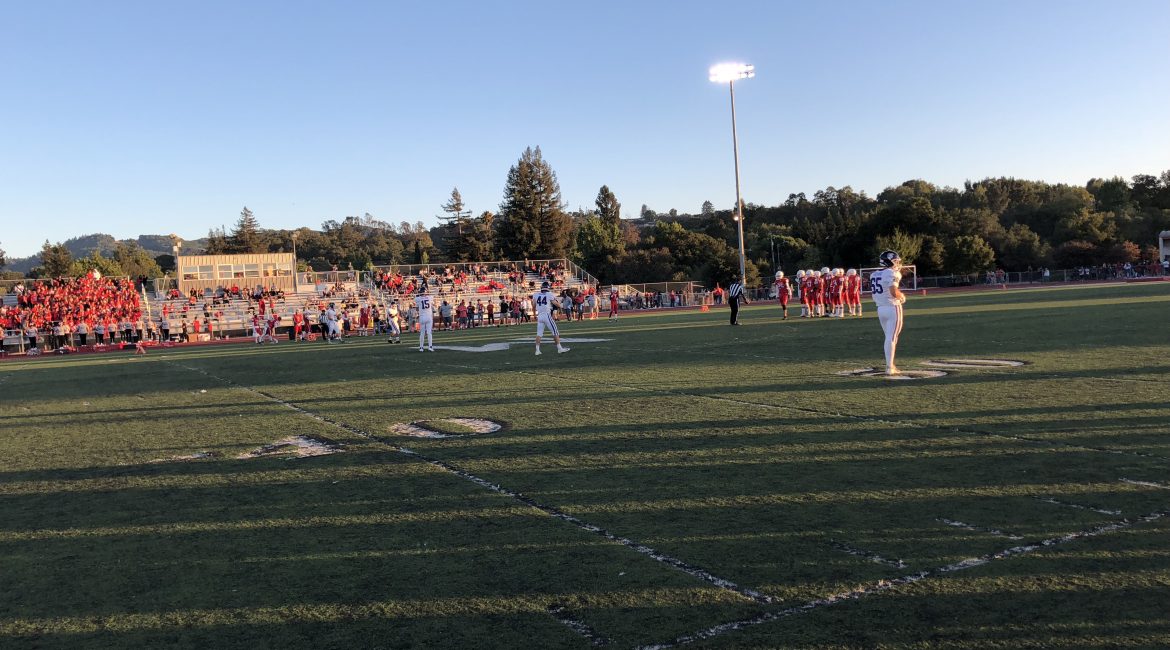 SANTA ROSA, CA – A slow start offensively for Petaluma didn’t shed any doubt as they scored 21 unanswered points to defeat Montgomery for the second year in a row, this time by a tally of 21-7.

Petaluma took the lead for good midway through the third quarter with a one yard rushing touchdown from Derrick Pomi.

It was a struggle to say the least for Petaluma (1-0) to get going. First possession went three and out. Then QB Cole Powers, on his first pass of the season, threw an interception to Vikings DB Andre Duvall. Then they recovered a fumble on Petaluma’s 41 yard line after putting together a decent drive. Sprinkle in a one yard rushing touchdown by Duvall and you have a 7-0 Montgomery lead after the first stanza.

A series of punts followed throughout the second quarter. A plethora of mistakes made by both teams was turning this game into a pitchers duel, very much unlike last year’s contest which was about three and a half hours and a total of 97 points were scored. A big issue for Montgomery was discipline. Multiple dead ball fouls and unsportsmanlike penalties would set the Trojans up with great field position, but to no avail.

“I told my guys that we were going to win with discipline. We had to be the better team in that department.” said Petaluma coach Rick Krist.

With the Vikings threatening to score again going into the half, Garrett Freitas leaped and picked off Cole Hallin’s pass for his first INT of the year, and heading into the half it was 7-0 Montgomery.

Montgomery (0-1) got the ball to start the second half. A turnover on downs, set up Petaluma at their own 30 yard line. At their 39 yard line now, Freitas broke off his first big run of the year, a 61 yard touchdown run as the Petaluma sideline and stands erupted as they got on the board. Reidun Christobal’s PAT was good and we were tied at 7 with seven minutes to go. Petaluma then ensued that possession with great defense, and notable pass deflections by John Candau. Later in the quarter, it was great defense and great pass defense, but this time by Christobal.

“Candau and Christobal played outstanding games. They locked down two great receivers that have the talent to play D1 football. They were excellent tonight.” said Krist.

Two plays into the 4th quarter, Petaluma was on the board again as in designed hurry up play, Powers ran it in for his first rushing touchdown of the year to give them some breathing room at 21-7. Montgomery again trying to march down the field and spark a comeback, but Freitas comes up with his 2nd interception of the game in the end zone and all but seals the Petaluma win.

Petaluma beats Montgomery for the second straight year, and will travel to Santa Rosa to play in one of the longest rivalry games in northern California, the battle for The Club.