RECAP- Pumas Pounce for the Win in Opener on New Turf Field: 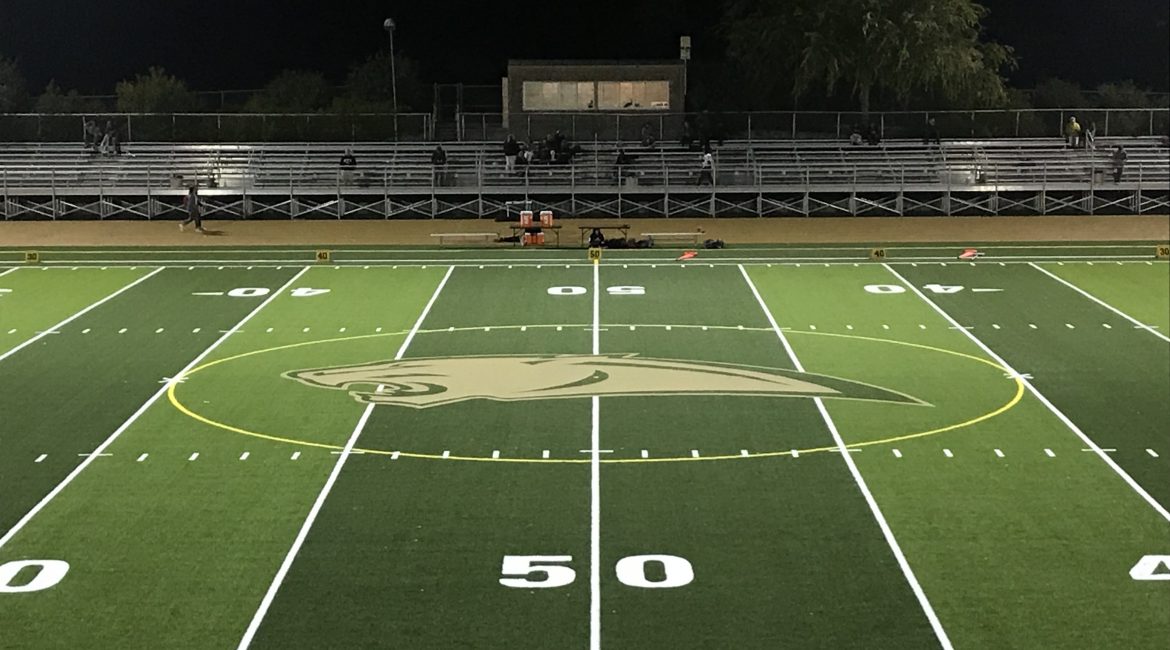 Redwood Giants, and the only thing looking more polished than the field was the Pumas offense.

Carrillo came out passing from the triple option as KC Kelly (SR.) completed his first pass for 14 yards to receiver Mason Adams (Sr.). The next couple of snaps would go to the pair of running backs Tyler Van Arden (Sr.) and Jack Sherman (So.). The drive would eventually see the endzone as Kelly found Adams for a 3-yard touchdown toss. Redwood’s ensuing drive showed off their dynamic duo at running back, with a steady mix between Alex Aguero (Sr.) and Rudy Washington (Jr.). The Giants would get the ball all the way down to the 3-yard line before having to settle for a field goal, or at least they thought. Carrillo’s Logan Kraut (So.) exploded around the edge and blocked the field goal attempt keeping the Giants off the board. The first quarter would end with Maria Carrillo up 7 to 0.

The second quarter saw the Pumas jump out to a 14 to 0 lead with 10:47 left in the half after Kelly connected with Kraut on a 34-yard touchdown pass. Redwood would respond within a minute after Aguero took a hand-off 81 yards to the house, but a botched PAT snap would leave the score at 14 to 6. The game hit a bit of a stand still until Van Arden and Sherman would string together a couple of first down runs that were eventually punctuated by Van Arden on a 1-yard touchdown run, putting the Pumas up 21 to 6 with 3:22 remaining in the half. Van Arden, who has offers from schools like the University of Hawaii, Fresno State and San Jose State, would find the end zone for a second time on a 2-yard dive, this time with 11.7 seconds left, giving the Pumas a 27-6 lead going into halftime.

Carrillo would start the second half with the ball, but Kelly would go down with a calf cramp and two plays later Redwood’s Washington would intercept a pass from Carrillo’s back-up quarterback Robson Winter (Sr.), giving the Giants new life. They would capitalize on this opportunity and Aguero would take 5 straight hand-offs for a total of 31 yards before finally scoring on a 6th straight from 3 yards out. A successful two-point conversion put the score at 27 to 14 with 7:16 left in the third quarter. Both offenses would sputter for the rest of the quarter until Van Arden took 2 carries for a total of 30 yards and scored his third touchdown of the night with 30.4 seconds left in the third. After an unsuccessful two-point conversion the third quarter would end with Maria Carrillo leading 33 to 14.

Redwood would start the fourth quarter with another five straight carries from Aguero before a fumbled snap gave Carrillo the ball back. The Pumas offense would struggle to manufacture a drive and they punted back to the Giants. A 27-yard pass from quarterback Sam Warren (Sr.) to tight end Alex Hagen (Jr.) would set the Giants up for a 3-yard touchdown run by Aguero. Another failed point after attempt meant the Pumas would get the ball back up 33 to 20 with 6:18 left in the game. Carrillo would continue a steady diet of hand-offs to Van Arden before turning the ball over on downs with 4:32 left to play. Penalties contributed to a less than ideal subsequent drive that ended in a turnover on downs for the Giants. Maria Carrillo would get the ball back with 2:25 left and hold onto it until eventually punting it back with 45 seconds left. The Redwood Giants fought until the end as Aguero took a 60-yard hand-off to the house putting the score at 33 to 26 with 15 seconds left. A failed two-point conversion and unsuccessful onside kick would allow the Pumas to run out the clock.

Maria Carrillo head coach Jay Higgins was proud of his well-rounded offensive attack. “We always want to be balanced, that’s always the goal. Any team has to play to their strengths, it always the goal is to be balanced. We have a great group of kids that have been working really hard together and have great chemistry. They are really taking (the game plan) to heart and striving for their potential. That’s what allows us to do what we do, especially in the first half.” The Pumas look to continue their success in their next game at Benicia on 8/31.