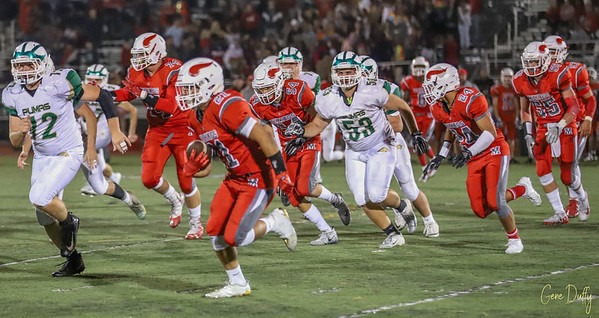 Montgomery hosted Maria Carrillo at Jason Franci Field on Friday night. It was the first time that new Montgomery coaches Vertis Patton and CoCo Grayer would face off against former boss Jay Higgins. Patton and Grayer had spent the past couple of seasons working with Higgins before taking the job at Montgomery earlier this year.

The game looked out of hand early after a 2-yard touchdown run from Tyler Van Arden (Sr.) and two touchdowns from Jack Sherman (So.) –a punt that was blocked, scooped and scored along with a 34-yard touchdown run—put the Pumas up 21-0 with four minutes left in the first quarter. That was until the Vikings responded with 52 seconds left, as quarterback Cole Hallin (Jr.) connected with BJ Johnson (Sr.) for a 42-yard touchdown pass. The first quarter ended 21-7 Carrillo.

A slow second quarter witnessed both teams struggle to get anything going offensively. Penalties plagued the Vikings and the Pumas struggled to string together a meaningful drive. Towards the end of the half, Montgomery’s Hallin connected with Kaih Johnson (Sr.) for 14 yards that set the table for another touchdown pass to BJ—this time for 29 yards—as the half was winding down. The point after attempt would be unsuccessful and Carrillo would lead at the half 21-13.

The Vikings third quarter looked a lot like their second; penalties, penalties and penalties. To pour more salt on the wounds, Hallin had to leave the game due to an injury and Carrillo’s Sherman found himself with another scoop and score after a fumble. Three quarters down, but the Pumas were up 27-13.

Time looked to be running out for the Vikings until Khameron Perkins (Sr.) threw a 52-yard touchdown pass to Kaih with 6:40 left in the game. Carrillo was clinging to a 27-20 lead but a quick three and out gave the Vikings the ball back and Perkins would toss another touchdown to Kaih—this time for 68 yards. Just like that, the game was tied at 27 with 3:43 seconds left. Carrillo had a chance to possibly seal the game with a 40-yard field goal, but elected to go for it on 4th down and failed to convert. The Vikings would give the ball right back on the next play as Perkins was picked off by Sherman. Carrillo’s KC Kelly (Sr.) would connect with Sherman for 26 yards putting the Pumas in what appeared to be a prime position to win, but the 36-yard game winning field goal would be pulled left.

Both teams would settle for 25-yard field goals in the first overtime and Montgomery opened the second with a 10-yard touchdown run from Perkins. The Pumas would try to respond but on 4th and 6 Van Arden was only able to gain 3 yards before being brought down out of bounds.

Coach Patton was pleased with the resolve his team demonstrated, “We had to fight. I told the guys to just focus and play hard we will get back into the game. We had to fight for each other, it’s a team game.” An animated coach Grayer added, “We’re built right, we talk about fighting through adversity and we talk about responding. That’s what we talk about. I told them a fumble was going to happen and we had to come back from it, the fumble happened. From summer practices at 6 am to now, we live on that, the response.”

Coach Higgins post game thoughts were simple and fixated, “We just needed to get ourselves focused, we came out strong and firing away. We get up early and then it feels like we relaxed, like we had it in hand. That’s a mistake. I was surprised to have our team respond that way but it’s a learning opportunity for us to understand that there’s no time to relax. No matter what, you must expect that the team you’re playing is going to play with pride and they are going to fight. You have to play the game start to finish for 4 quarters.”

Both the Vikings and Pumas will open league play next Friday. Montgomery travels to Elsie Allen and Maria Carrillo will host Ukiah.