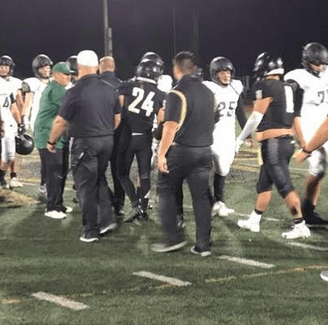 Windsor and Casa Grande kicked off the season Friday in what turned out to be a tale of two halves. Casa

Grande jumped out to a quick 7-0 lead after quarterback Jadon Bosarge (Sr.) connected with Dominic McHale (Jr.) for a 20-yard touchdown strike. Windsor fumbled the ball on their next drive only to get the ball right back after a premature snap caught Bosarge off guard. Penalties made it tough for the Jaguars to generate any momentum and Casa led 7-0 after the first.

Windsor pounded the ball downfield with running back Lorenzo Leon (Jr.) as the Gaucho defense would bend but not break. Windsor then faced a 4th and 10, where the Jaguars rolled the dice and it payed off with a 15-yard touchdown pass from Nick Pariani (Jr.) to Jake Seivers (Jr.). Casa’s ensuing drive was aided with multiple Windsor penalties and Bosarge capped off it off as he connected with McHale for another touchdown. The Gauchos would enter halftime with a 14-7 lead.

It was clear momentum had shifted right out of the gate as the Jaguars ran the ball down field with the help of running backs Jerimiah Pignataro (Jr.) and Octavio Vega (Sr.) before Leon punched the ball in for another Jaguar touchdown. A quick 3 and out from the Gauchos put the ball back in Leon’s hands for his second touchdown and within a matter of minutes Windsor took the lead 21-14. Casa’s offense sputtered again and the punting team did them no favors when a botched snap with 2:42 left in the quarter resulted in a safety. Windsor took a 23-14 lead in the 4th.

Running back by committee continued to be effective for the Jaguars. Leon and Pignataro did most of the heavy lifting before Vega crossed into the end zone putting the Jaguars up 30-14 with 5:51 left. On the next drive Bosarge took the Gauchos down field completing a series of passes and capped off the solid drive with a 5-yard touchdown pass to McHale, his favorite target of the night. The Gauchos converted a 2-point conversion that put the score at 30-22 with 3:47 left. Windsor continued to pound the ball down the field until the Gauchos manufactured a turnover on downs with 24.9 seconds left. A series of passes from Bosarge to Rashaad Nixon (Jr.) would help Casa move the ball down the field but time would eventually run out.

Casa Grande coach Dennis Brunk was visibly upset but ultimately proud of his team, “We did our alignments and assignments, we just decided to take it easy and not follow through on what we were working on all week. They ran it up the gut, between the tackles and beat us up front. We couldn’t move the ball and we’ve got a lot of things to fix. The team has fire and the guys are great, but we’ve got to come out and play football and we didn’t tonight.”

Both the Jaguars and Gauchos will be in action next Friday. The Jaguars will host Freedom High and the Gauchos have their home opener against Montgomery.