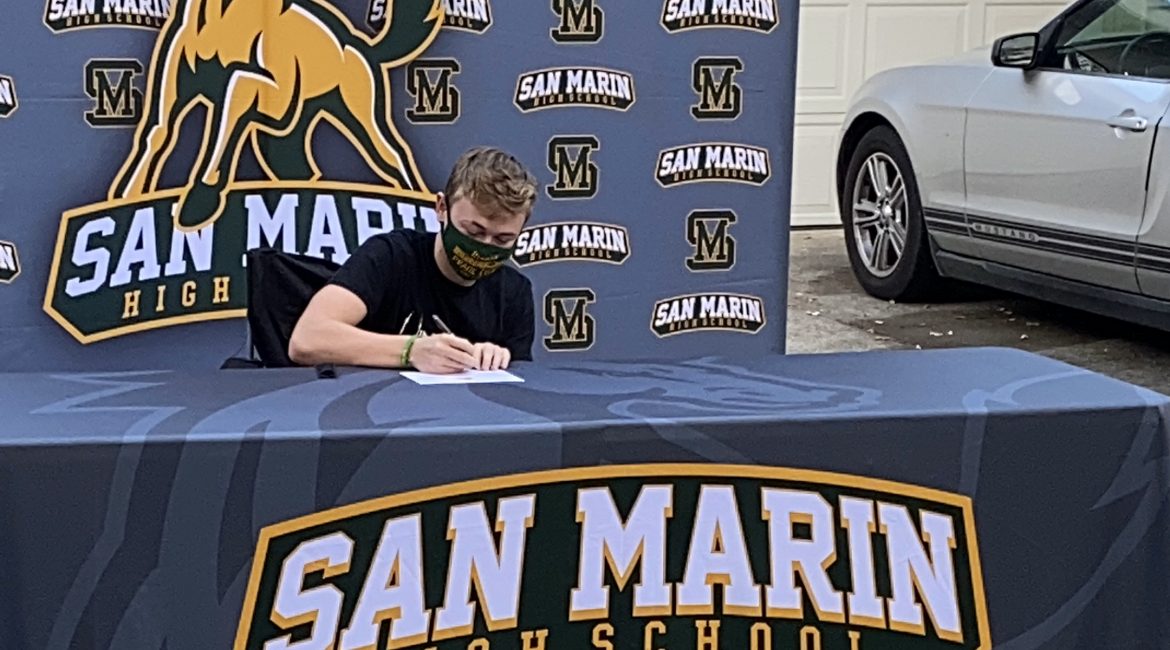 San Marin Guard Tyson Geraci officially announced his committment to Chico State this past week. Geraci will be following in the footsteps of his brother, Calvin, who also prepped at San Marin and is going into his senior season at Chico State.

“I had a few other schools in Chico’s conference (CCAA) go after me, but I figured if I wasn’t going to go D1, then Chico would’ve been my home,” Geraci Said. “I’ve watched them play and they’re a really good family to me.”

Sonoma State, Stanislaus State, and Point Loma were among some of the other programs interested in Geraci’s services.

Geraci is playing under head coach Pat Fahy and assistant coach Steven Walther at San Marin. Both coaches worked together at Casa Grande under the late James Forni, and brought some of that mid 2000’s-mid 2010’s Casa juice down to Marin.

“The way they do things is similar. They emphasize respect, leadership and taking care of each other. It really got through to a lot of us.” said Geraci.”

“(Pat) Fahy is a great guy and a great coach. It got some getting used to, but when we started seeing the results of what he was putting in, we now knew how he wins.” mentioned Geraci.

Geraci will go into his fourth and final high school season at the home of the Mustangs. Last year he averaged  20.7 points per game, while grabbing 3.5 rebounds per game, and dishing out 2 assists per game. Geraci is already at 1,214 points in his career, and looking to add one in his senior season.

In his sophomore campaign, he led San Marin to a 16-14 record, an MCAL Playoff appearence and win, as well as an NCS Playoff appearence and victory. Geraci started to have big scoring nights right from the start. He started off the 2018-2019 season with 25 points in a 61-50 win over Petaluma. He would then score 32 and 36 points in back to back wins over Maria Carrillo and Windsor. When he got into MCAL play that season. he brought a more consistent approach to the floor, but still had a few more breakout games up his sleeve. A 65-52 win over arch rival Novato saw him score 30 points on 64% shooting. In the Mustangs final game of the season against the top ranked team in the country at the time, Salesian of Richmond, he scored 35 of the team’s 43 points. That’s right, even the best team in the country couldn’t stop Geraci.

“I gave everything I had that game. I knew a lot of their players from AAU. I went in saying I was gonna drop 50. I wanted to score in that game,” commented Geraci.

A 35 point outing vs Tamalpais, a 37 point shootout on 6-10 shooting from three vs Drake, and a 25 point outing vs San Rafael, but a Steph Curry in Oklahoma City type shot from Geraci is sunk just before the buzzer to give San Marin their signature win over the Bulldogs in their penultimate game of the season.

He did that coming off a wrist injury and sitting out the previous two games.

“I remember I got the rebound and I’ve never ran so fast in my life because I did not want to lose that game,” Geraci said.

If there are any we missed, please email the information to mbysn365@gmail.com.