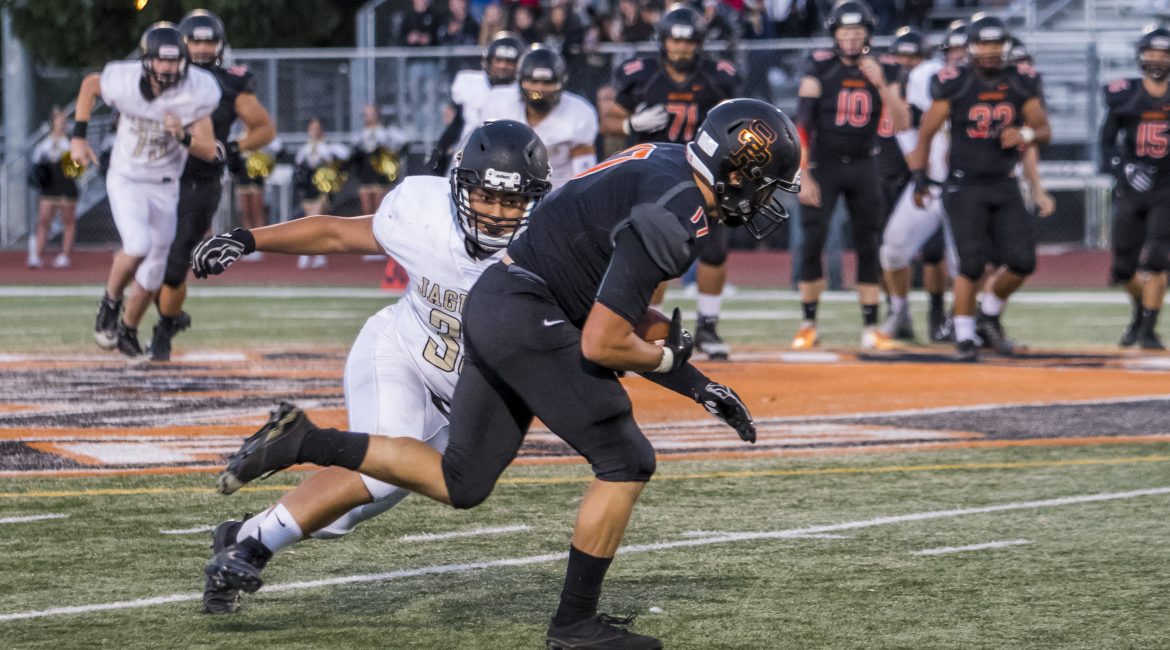 The first quarter didn’t go according to plan for either team. Santa Rosa started out the game with a 9-play drive that ultimately ended in a turnover on downs. Two plays later, Windsor threw an interception at their own 23 and Santa Rosa would turn the ball over on downs for a second consecutive drive giving Windsor the ball at their own 32. The Jaguars managed to move the ball to midfield before a botched snap dragged them back 19 yards and a fumble on the next play would give the ball back to Santa Rosa. The first quarter ended tied at 0.

Windsor coach Brad Stibi had a few takeaways after the Jaguars struggled early; “We needed to keep our heads in the game. There were mental mistakes that needed cleaning up and we weren’t sustaining blocks or playing to the whistle.”

Santa Rosa’s offense continued to sputter at the start of the quarter and they were forced to punt. The Jaguars would respond with a 10 play, 65-yard drive that saw a 40-yard field goal from Otis Cain (Jr.), putting them up 3-0. The Panthers tried to respond with an 11 play, 42-yard drive that was eventually put to rest when Jake Seivers (Jr.) intercepted a pass with 36 seconds left in the half. Windsor took a 3-0 lead into halftime.

Santa Rosa coach Russell Ponce hit the drawing board for the second half; “We made a couple of technical adjustments and reminded the team to play more physical. We wanted to keep pushing, keep grinding and play harder than them.”

The Panthers would do just that. After a quick 5 play drive that resulted in the Jaguars punting the ball back to Santa Rosa, the Panthers went on a 16 play, 70-yard drive that ate up the remaining 8:30 in the 3rd quarter. Still down 3-0, the Panthers first play of the fourth quarter was a 2-yard touchdown run by Jayvee Long (Sr.). A failed 2-point conversion attempt would result in a 6-3 Panther lead with 11:54 left in the game.

The Jaguars would strike back as quarterback Nick Pariani (Jr.) threw a 40-yard pass to Seivers that set up an 18-yard touchdown run by Octavio Vega (Sr.) The Jaguars led 10-6 with 9:52 remaining. Santa Rosa would respond quickly with a 6 play, 81-yard scoring drive that was set up by a Trevor Anderson (Jr.) 47-yard toss to receiver Roman Correa (Jr.) and punctuated by a 25-yard rushing touchdown from Long—his second of the night. Down 13-10, Windsor would have one more chance to put points on the board but an 8 play, 27-yard drive would end in a turnover on downs with 2:20 left. Santa Rosa would run out the clock thanks to a pair of first down carries from Chandler Andrew (Sr.) and Long.

Now standing at 3-1, Coach Ponce was proud of his team’s effort; “I knew we were physical, but Windsor is another type of physical, so I just wasn’t sure and it was exciting to find out we can get to that level.” Santa Rosa get to test their toughness next Friday when they travel to Maria Carrillo.

With a 1-3 record, Coach Stibi pointed out some things that his team still needed to improve on; “We need to get a little bit tougher, dig down deep, look at ourselves in the mirror and ask ourselves when the times get tough, how are we going to react to that?” That question will be answered next Friday, when Windsor hosts Montgomery.