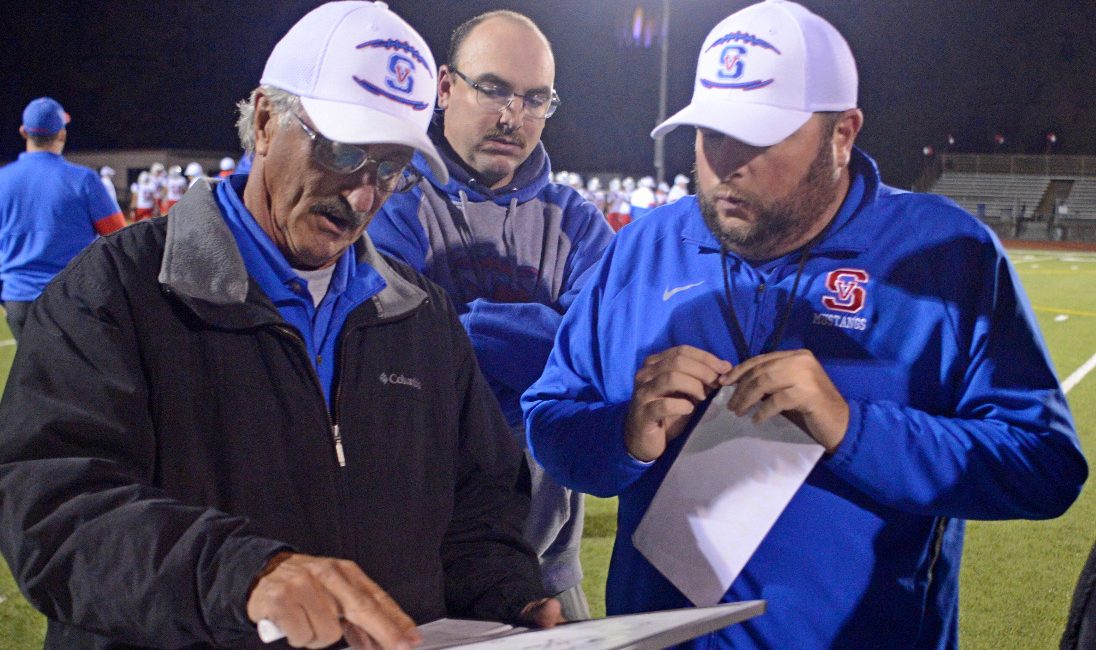 Feature Photo by Sumner Fowler (Finkbohner is back middle)

A 2009 graduate of Casa Grande, He’s been with the private Catholic school for three years serving in a number of roles: Assistant Football Coach, JV Baseball coach, and Freshman Basketball coach.

With him comes a lot of experience in coaching baseball. He’s been a Baseball coach at Casa Grande, Rancho Cotate and Petaluma High School, as well as leading the Petaluma Leghorns Legion Team over the past decade.

The new hire comes before the Mustangs baseball program enters the NBL-Redwood, a step up from NCL II competition.

“Those teams will be tough tests for us. I like playing those types of teams and hopefully we’ll be ready,” Finkbohner said.

One of the big keys for small schools like St. Vincent de Paul throughout the sports seasons is how to share their multi sport athletes. With the spring season beginning in March with both Basketball, and Baseball season coinciding with one another, it is something coaches will have to figure out. Finkbohner and head boys Basketball coach Tom Bonfigli met already to lay out a plan.

“I met Tom, and we sat down and talked about how we are going to balance kids. We both like practices to be up pace, but we have to work together to share kids,” Finkbohner said. “When you get a big name like Tom Bonfigli helping and gives good advice to a guy with 0 varsity wins from a guy with 816 varsity wins, it helps a lot.”

While St Vincent will be in the North Bay League, Finkbohner hopes to keep some of the small school rivalries they have built on the diamond over the years. He hopes to keep annual contests with schools like Tomales, Sonoma Academy, Upper Lake, and Lower Lake.

Finkbohner says he’s more of a traditional Baseball guy. A grinder, someone who stresses the fundamentals and wants to be sharp. He hopes to bring that mentality to a Mustang program heading into the large school league.

“Hopefully we are playing our best ball late in the season. The name of the game is pitching and defense, and we need to have that down by the playoffs,” he said.

“The ultimate goal is to build bigger and better men. It’s the guys that don’t make it past high school that have the biggest impact on me because those are the people that end up coaching their kids,” said Finkbohner. “We’re gonna be students first, athletes second, and then we can hopefully cap it off with a good program.”

With Bonfigli, and head Football coach Trent Herzog around, the rookie head coach will have plenty of experience to turn to as he takes the helm of the small Catholic school in Petaluma. Their first league test in the NBL-Redwood will be when they travel to Santa Rosa on April 7th, 2021. The two faced off in 2019, with the Panthers grabbing a 14-8 victory.