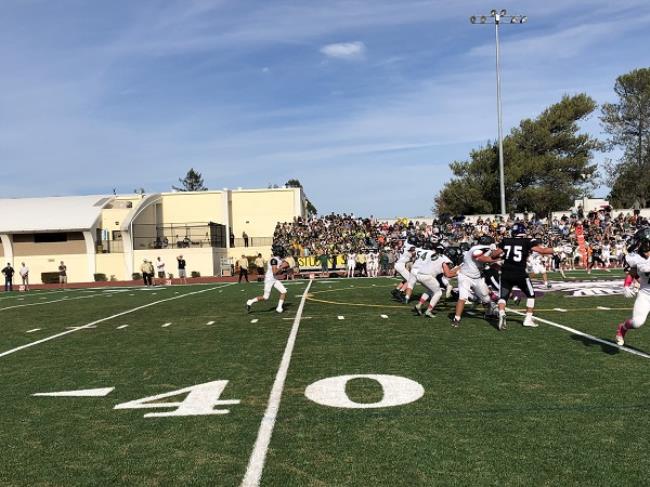 PETALUMA, Calif. – A rivalry game with a huge crowd saw one of the best games they could see, a back and forth battle, seeing Casa Grande defeat the Petaluma Trojans in the Egg Bowl, 37-36 on Saturday afternoon at Ellison Field.

An overflow crowd plunged into Ellison Field, with bands from both squads showing out.

Jadon Bosarge’s touchdown pass to Carson Kerrigan of 33 yards with 28 seconds left, and Jordan Gramajo’s two point conversion plunge into the end zone put Casa Grande ahead, and effectively gave them the win in the Egg Bowl.

“We knew we were going for two in that situation,” said Casa Grande coach Denis Brunk.

“Kerrigan hadn’t gotten a lot of touches all year so we focused on him this week,” Brunk added.

It was a very well played game defensively on both sides of the ball to start. On the second play of the game, Garrett Freitas intercepted a Bosarge pass to get the Petaluma crowd on their feet. After a few plays back and forth on both squads, Petaluma punched the ball in on a Derrick Pomi one-yard touchdown run to put Petaluma up 7-0.

Petaluma stopped Casa Grande on 4th & goal at the one yard line to get the ball back. In the second quarter, Casa Grande faced a 4th-and-7 at its own 45 yard line, but Conner Pedersen tipped the pass to the ground and got Petaluma the ball back. Colton Prieto would then handle it 14 yards in for Petaluma’s second touchdown and the Trojans led 14-0.

As the first half was winding down, Casa Grande had put together a good drive. After a pass interference penalty advanced the ball to the Petaluma 11 yard line, Bosarge connected with Nate Busse for a Casa Grande touchdown with two seconds to go in the half. Petaluma led 14-7 at the break.

“We felt that we had a little momentum. We were moving the ball pretty well against them,” said Brunk.

Petaluma got the ball to start the second half. A long drive with several short gains ensued, with Petaluma eventually punching it again with Pomi from one yard out to push the Trojan lead to 21-7.

Casa Grande then moved the ball through the air on their next drive and a big run from Alex Johnson of 32 yards set them up to score with a one yard run from Gramajo to cut it to 21-14.

Petaluma marched right down the field, and took a one score lead into the fourth quarter.

On the first play of the final stanza, Freitas powered the ball in from 9 yards out to push the Petaluma lead to 28-14. Then came the Casa Grande comeback.

Casa Grande got the ball in good position after a short kick. Johnson took the ball right to the house for a Gaucho touchdown and made it 28-21 Trojans.

After a costly fumble by Petaluma, recovered by Matthew Murphy of Casa Grande, the Gauchos scored on a QB scramble by Bosarge, who dived over the pylon for a Casa touchdown. They went for two, using the full house formation with Gramajo and converted to give Casa Grande their first lead of the game at 29-28.

“I had known for a bit that we would go for two in that situation. There was too much time on the clock and I knew Petaluma would have a good chance of scoring,” said Brunk.

Petaluma got the ball with about seven minutes to play. A nice, long drive, with a big fourth down conversion on a screen pass from Cole Powers to Freitas put Petaluma in the red zone. Prieto then punched it in for his second touchdown. Petaluma went for two and converted through the air to Nick Ayers as they took a 36-29 lead with 1:06 to go, but it merely set up the Gaucho heroics.

“That was a heck of a drive. One of the best I have seen in awhile,” Krist commented.

Petaluma outgained Casa Grande, 457-373. Bosarge finished 14 of 23 for 140 yards with two touchdowns and a rushing touchdown.

Freitas had 136 yards on the ground and Prieto had 175 yards rushing for Petaluma.

“My kids played their hearts out for this community. They really did play hard,” noted Krist.

Johnson had 119 yards for Casa Grande.

We will await to hear what the NCS pairings are for the next opponents for these two squads.