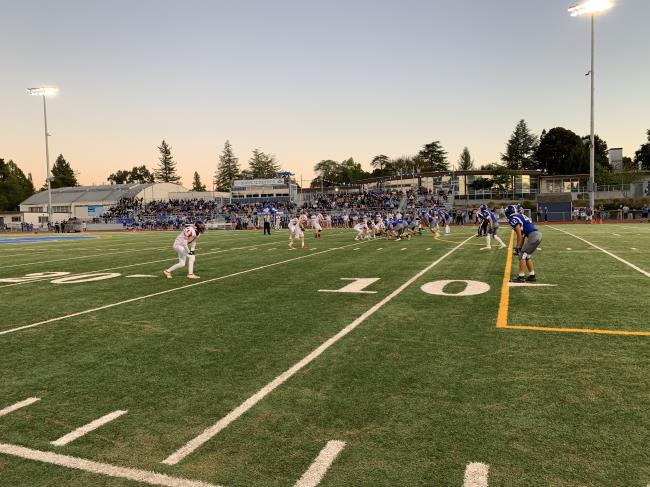 SEBASTOPOL, Calif. – Coleman Hayes’ 20-yard pick-six with 7:46 left all but sealed a victory in the Apple Bowl for El Molino, which defeated Analy 39-24 for its first win over the Tigers since 2010.

“It’s a big win. It’s great for the guys, they played hard and they finished,” said El Molino coach Randy Parmeter. “Coleman (Hayes) is such a great leader and a player, and I was so glad he had that moment and was so proud of him.”

Jalen Hall began his big night on the ground by also beginning the scoring, with a 15-yard dash to the end zone to put the Lions up early, just 3:05 into the game. Analy (1-3) wouldn’t be easily denied as Gavin Allingham found Trent Vogel for the first of two scores on the night, but this began a rough night for kicker Arthur Taganashi, as he missed the first of two PAT’s and the Lions still led 7-6.

Weston Lewis led his offense right down the field on the next drive and threw a 15-yard touchdown pass to Cole VanStone on fourth-and-eight to extend the El Molino lead with 2:46 to go in the first quarter.

Allingham found Kaden Fox as he broke a few Lion tackles en route to a 38-yard touchdown reception, but another missed PAT kept El Molino up 13-12. Jackson Dunkle responded for the Lions, as he gave an excellent second and third effort before finally plunging into the end zone after a 24-yard rumble to the endzone, and El Molino (3-2) again went up, this time by eight.

With 3:12 to go in the first half, Allingham had his third touchdown pass of the night, this one to Nick Kraemer from 23 yards out. Analy went for two this time but failed, trying the direct snap to Fox but was stopped cold by the El Molino defense. The Lions led 20-18 going into the halftime locker rooms.

Both defenses would step up in the second half. A game that featured quite a few personal foul penalties became very chippy and physical on both sides. Lewis did score however, with 5:35 remaining in the stanza, turning a scramble into a 64-yard touchdown run. They would miss their PAT so it was 26-18 Lions as the game went to the decisive fourth quarter.

After Hayes’ interception return for a score, which made it 33-18 in the final quarter, Analy cut the El Molino lead to nine, but opted to go for two with 5:47 to go, and did not get it. So the Lions took back over, up nine, and scored again when Lewis snuck in behind his offensive line. The El Molino sideline then began to celebrate.

The last time the Lions had beaten Analy, the game was played in the old Sonoma County League and El Molino emerged with a 24-17 triumph. Now the teams are in separate leagues and play this game as a non-league affair.

El Molino next has a bye, and then will travel to Santa Rosa to begin North Bay League – Redwood play on Oct. 4.